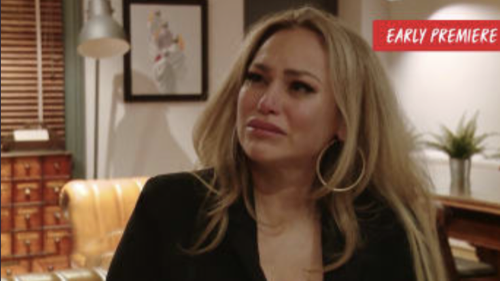 Tonight on TLC their popular reality show 90 Day Fiance: Before the 90 Days airs with an all-new Sunday, August 25, 2019 episode and we have your 90 Day Fiance recap below for you. On tonight’s 90 Day Fiance season 3 episode 4 “Love is a Battlefield”, as per the TLC synopsis, “Tim & Jeniffer clash on day 1 in Colombia; Caesar heads to Mexico to meet Maria, and Darcey gets emotional in London.”

Meeting Zeid’s friends was a bit of a bust. Rebecca was excited at first to meet Zeid’s friends because she thought Zeid would show her off and he didn’t do that at all. In fact, Zeid appeared to have forgotten all about her when he saw his friends. He instantly reverted back to his age and was just goofing out with his pals when Rebeca grabbed his attention. She wanted to meet his friends and so she had to remind her fiancée that she was there first. Then and only then did Zeid introduce her to his friends. He introduced her and unfortunately things didn’t go as Rebecca hoped they would. The truth is being around his friends made her feel old.

They were basically children compared to her. They were immature and they questioned her age. It turns out they saw some of the photos she sent Zeid. You know, the ones with the filter on them and that she used to catfish him into believing she didn’t look her age. Zeid had chosen to look past that con job and his friends were just a different matter. They more considered Rebeccas as a cash cow for their friend. They found out she spent three thousand dollars ongoing her whole arm in tattoos and that money could buy a shop in Tunisa. So, of course, his friends saw her as rich. They thought that as long as she took care of their friend that it would be easier to overlook her age.

Yet, Rebecca was better off than Benjamin. Benjamin was interested in a woman named Akinyi from Kenya and his kid seemed to be a sticking point. He was a father and he wouldn’t do anything to change that and Akinyi didn’t feel the same way. She thought she was too young to be anyone’s mother. She told her friends and family how she felt and s the only one she didn’t talk to this about was Benjamin. The same Benjamin flew out to see her. He didn’t know she had doubts and he was actually more worried about the bride price. That’s how far his mindset goes. He thought that he would propose to her and that she would say yes.

Benjamin thought the biggest test to their relationship would be her father. Akinyi’s father had to approve of the relationship and he was also going to be negotiating the bride price with Benjamin. Benjamin was hoping that the price wouldn’t be too high because he wanted to marry Akinyi in the coming months. He hadn’t told his son that he might be getting married and he says he didn’t mention it because he didn’t want to confuse his son. He wanted to get this bride price handle first and then tell his son when it was a done deal. And this more than anything shows how much his son means to him, so how does Akinyi think she’s going to handle this if she doesn’t want to be a mother.

Maria has claimed plenty of outlandish things over the years. She told him she couldn’t meet him in Mexico because it was her mother’s birthday and he believed her. He didn’t question why her mother’s birthday came as such a surprise for her. She should have known it happened every year on the same day and so why take his money if she wasn’t going to buy the ticket. She also didn’t spend the money on buying a ticket for the right day. She needed him to buy her a ticket and that seemed to be the only guarantee to get her to meet him. Caesar was meeting for the first time after so long and days before they were finally supposed to meet in person – she began ghosting him.

Meanwhile, Tim was out here pursuing a good thing. He went down to meet his Latin beauty Jennifer and their first impression of each other had been great. Especially as Tim won over her daughter. Her daughter was still a baby and so having a huge teddy bear was the perfect gift for her. She was so happy that it made Jennifer happy. Jennifer had been nervous about his arrival because she knew they had to talk about his ex and she forgot about it at first because their introduction had gone so well. It wasn’t until later that she remembered. Jennifer was angry with him for his extremely close relationship with his ex-fiancée.

The ex-fiancée was constantly around. Veronica and Tim share custody of their daughter and they were friends because of that relationship, but Veronica has often taken their friendship too far. She’s frightened off other girlfriends and she felt free to make fun of Jennifer. Jennifer didn’t know any of this and that’s why she’s been asking this time. She wanted to know why Tim would send her a photo of him with his ex. They looked too close in that photo. Any woman would have said the same after seeing Veronica seated in Tim’s lap and so it was time for Tim to fess up. He had to tell her that Veronica was one of his best friends and he had to be mocked for it.

Morgan and Althea go back to their track and try to think about another way around the roadblock. Morgan says he doesn’t have time for this, grabs his stick and goes back over to speak to Logan. Morgan asks him why he needs gas. Morgan says that he can help him. Logan says that he is not going to do the “take what you need, leave what you don’t” crap, he wants to know where the oil fields are. Morgan tells Logan that he will find another way. Logan says helping other people will not help Morgan help his wife and son. Morgan turns around fast and puts his stick to Logan’s throat. Althea tells him to lower it and stop. Morgan and Althea leave.

Alicia packs up ammunition. She grabs a weapon from Strand, says that she is going out there to kill the walkers, so they can get out of there. Wes comes around and says he is going to help.

Wes goes outside and starts killing walkers. Meanwhile, one walker makes his way through a glass door and is coming at Alicia and Strand. Alicia picks up a weapon, but Strand comes through last minute, even though he has problems seeing because of the tear gas.

Morgan and Althea are back in the truck, they talk about the documentary they made. Althea says that what they lost doesn’t define them, but maybe what they do will.

Wes, Strand and Alicia find the truck, and the man that stole from Wes. Wes approaches him, the man throws the bag at him and tries to strangle Wes, but Wes has a knife and stabs him. Wes asks the man where is his manuscript. Wes finds it, the man tells him that it was really good stuff, then he dies. Alicia can’t believe that Wes killed the man over a book. Wes walks away, Alicia picks up the book and tells him that he forgot his book, Wes turns around and says the man died for the book, he can keep it.

Alicia looks at Wes’ book. He says the same thing at the end of the book that was written on the trees; Wes painted those trees.

Alicia decides she is going to paint a tree, Strand tells her it is beautiful. A walker comes up, Strand says he has got it, she says no, she will do it, and she does. Alcia then paints on the tree, “no one is gone until they’re gone.”

We left the group and finds a tree that he painted, and gets emotional.

Morgan tells Althea that she is wrong and she is right. He is not running away from anything, he is not a ghost and not what he just lost. He holds on to it because it is connected to it. He says that sometimes he is afraid that he may lose some of the good. Althea says that she can make sure he doesn’t forget, he can tell her about his wife and son, he says ok.

Meanwhile, someone is breaking into the safe where Althea put her safes. It is Logan and his people, they broke in. Logan is looking for journals, but he finds the tapes and is hoping somebody slipped up on one of them and mentioned where the oil fields are.