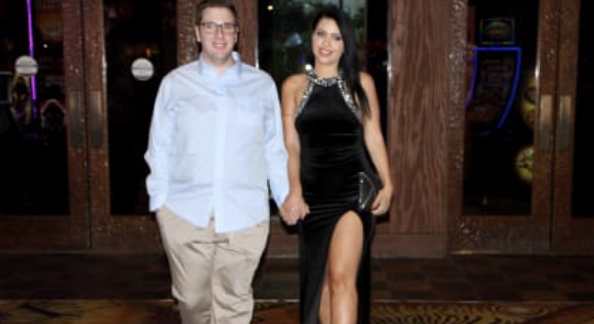 Tonight on TLC their popular reality show 90 Day Fiance; Happily Ever After? airs with an all-new Sunday, May 26, 2019 episode and we have your 90 Day Fiance recap below for you. On tonight’s 90 Day Fiance season 4 episode 6 “Dirty Dancing”, as per the TLC synopsis, “Larissa confesses her biggest secret; Ashley lets loose in New York City while she’s away from Jay; Nicole’s family makes a finale plea; Pedro worries things went too far with his sister’s friend; Pao discovers the real reason Russ came to Oklahoma.”

So make sure to tune in tonight between 8 PM – 11 PM ET for our 90 Day Fiance recap.  While you wait for our recap make sure to check out all our television spoilers, news, recaps and more, here!

Larissa has been happier lately. She said she wants to make her marriage work and she did seem like she was trying to develop a relationship with her mother-in-law. Larissa wasn’t picking fights and she was hanging out with Debbie. Debbie and Larissa even picked up Colt from work together. It’s still a little sad that they only have the one car and no air conditioning in Las Vegas, but Larissa wasn’t complaining about it and so Colt was rewarding the new her. He took Larissa to the casinos and they both learned that she was a natural at blackjack. She loved playing because she would see other people on tv and so she was in a really good mood when her husband told her that he was ready to put in the paperwork for her.

Colt held off on filing for her until they knew which way the courts were going to go on the domestic charges and so now there was nothing holding him back. He assured his wife that she would be able to visit her family once these papers get in, but he didn’t get much of a response for her. Larissa and Colt met in Mexico and then, later on, they met in the capital of Brazil for her engagement visa. She didn’t bring him to meet her family and it was beginning to feel off to Colt. He wanted to know why she didn’t like talking about anyone from home and, well, the truth is she’s been keeping a secret. Larissa wasn’t entirely honest about herself when she first met Colt and she knew to tell him afterward could have meant her going back home. And so she doesn’t want to be honest until she’s sure he can’t get rid of her.

Meanwhile, Chantel was thinking about following her husband to the Dominican Republic. He went there for an undetermined amount of time and it was unclear if he was ever coming back. Their marriage at a crucial point and Chantel feels like the only way she could fight for it is if she goes over there. She tried to reach him for prearranged video-chats and he’s not returning her calls. Chantel knows she can’t call his family as a means of contacting her husband because they don’t like her and so she tried to get her parents to agree with her that going to DR was for the best. But her parents think that Pedro needs to come back out of his volition. He’s not going to want his wife surprising him and if he doesn’t want their marriage then her making the trip isn’t going to do jack.

Ashley thought she was being proactive when she went with her friends to New York, but her marriage is basically over. She stomped on her husband’s pride when she had drinks with her ex and now partying with her friends like she was still single meant he wasn’t a priority with her. Ashley had been right to be upset in the beginning. Her husband emotional cheated on her and made her feel like crap. Only she took him back. Ashley said she didn’t want a divorce just yet and that she still needs to process her feelings. She then set about punishing him and eventually he’s going to say that he might as well have left.

Jay wasn’t even allowed to leave the house when she left to go hang out with her girls. The man was bored out of his mind in a small town and he tried calling her, but that didn’t work, and a video call ended in disaster when he saw that she was out partying. She was acting like she was still single. Ashley may not admit but she wrote the marriage off and now she’s pretending like she can go back to it after she’s had her revenge. And, like, that’s not how’s it’s going to go. The marriage would still be broken only this time it will be mistrust on both sides. And so this whole song and dance that they were doing now is merely a waste of time because things ended the moment he began texting other women on their honeymoon.

Then there’s Nicole and Azan. Azan has been taking her money from the beginning and he hasn’t followed through on any of his promises. He doesn’t own his own store and he doesn’t have a job. Azan and Nicole have talked about going to Grenada to see if they could move there and Nicole didn’t want to set up false expectations with her family so she told them that this trip was a vacation. If it was vacation then she didn’t have to commit to one place, but her family still took issue. They said that she needed a job because she didn’t have any money or place to call her own and they reminded her that her daughter May has to start school that fall. May wasn’t a baby anymore that could be picked up and moved on a whim.

May needed stability and the family was more focused on her than they were on Nicole. Nicole got upset when they began asking about how they were going to afford May’s schooling and where the family will settle for the next few years, but this time Nicole’s attitude didn’t stop her mother or her stepfather from asking questions. They let Nicole run her life back when it didn’t really affect anyone else and now things are different. They want to hear plans and at least get a grasp on when she was going to get a job. Nicole wasn’t asking these questions and nor did she seem like she was pushing for a commitment from Azan. They’ve been together for a few years now and it was time to buck up.

Also, as it turns out Larissa’s secret is that she’s missing her children. Here everyone was thinking it was murder or the law and its kids. She left them behind in Brazil because she had only known Colt a few days and wanted to see if the relationship would work out before she got her children involved. So that’s sort of understandable. She didn’t want her drag her kids into a very big unknown and it seems that Colt does know about her kids. He may or may not have been told right away but he was told. He just didn’t share that information with his mother. Debbie was left in the dark because no one knew how she’d react and Larissa said she didn’t trust her. She and Debbie did get off on the wrong foot when she didn’t like the house and called Debbie’s decorations tacky.

Things are different now because Larissa wants her babies back. Its why Larissa doesn’t like talking or even thinking about her family because it just made her sadder. She also knew that the phone calls, texts, and even the video-calls weren’t enough though things were different now because she and Colt have been married four months. They were getting along for once and he was no longer calling the cops on her. So Larissa was ready, to be honest with everyone. She sat Debbie down and she told her that she has kids. Larissa also admitted that she hated seeing Debbie taking care of Colt because it reminded her of her own kids and that’s why she tended to lash out. And so now she’s ready to be honest because she wants a bigger house for her kids in case they move in with them down the line.