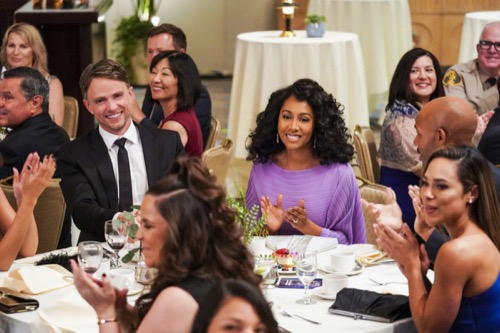 Tonight on CBS their new series All Rise airs with an all-new Monday, October 7, 2019, season 1 episode 3 called,“Sweet Bird of Truth,” and we have your All Rise recap below. On tonight’s All Rise episode as per the CBS synopsis, “Lola immerses herself in the world of online gaming when she presides over her first trial concerning cybercrimes after two friends go head-to-head over a deleted avatar and all the assets associated with it.

Also, Mark discovers a life without Lola in the DA’s office is going to be lonelier than he thought, and Luke is set to be honored at the annual Valor Awards for his heroism.”

An African American male is running with headphones in trying to get his workout in when the police pull up and demand he get on the ground. He tries to explain who he is but they aren’t listening.

Judge Lola Carmichael gets caught hanging out in the stairwell. Her boss tells her they are all happy she is here and she needs to hang out in the lounge so that she can get used to her co-workers.

The police let the man, Luke, go. Meanwhile, in a court room across town a lawyer preps her client for their case. She is being accused dog hacking.

Mark watches video footage of an asian woman being told to go back to where she came from before a white mail in a truck nearly hits her as he speeds off.

Lola takes the bench for her first case of the morning, a hacker who is in trouble. Meanwhile, Mark tracks down his colleague about the woman who was nearly hit. He wants to know why he isn’t pursuing the case. Mark heads to the woman’s work to find her. It seems her boss transferred her to another location because of the man who scared her.

Luke takes off after court where he is a security guard, dodging a lawyer friend, Emily. He is upset about what happened to him.

Mark finds the woman and begs her to let him represent her. Lola and Luke talk. He tells her what happened but he doesn’t want anything to happen.

Mark heads home to spend sometime with Ria, his girlfriend. Lola interrupts his night. She needs help looking into a game named Skyrise for a hacking case. They get to work playing the game. She tells him about her boss Benner asking her to hang with the other judges. Meanwhile, Emily sees Luke across the bar but when she tries to get to him he is gone.

Mark preps his client for trial against the man that scares her while Lola encourages her clients in the hacker case to get into character as their avatars.

Mark gets his client into the court but she panics and leaves. Lola allows the witnesses to take the stand as her avatar. She talks about her made up “people’s” land, throwing the court writer for a loop.

After the session, Lola is questioned by her boss for letting those involved in the case take the stand as their avatars.

Back in the court room, Lola encourages the plaintiff and the defendant to discuss their issues to avoid jail time. They have a heart to heart. They both show remorse.

Mark is back in court to give his closing statement. He shares how scared his client is and how she won’t come to court. He shows video he discovered, proving the man attempted to hit his client with the truck he was driving. He wins the case.

Lola, Mark and the others all attend a dinner after. They talk about their day and their struggles. Everyone is happy.