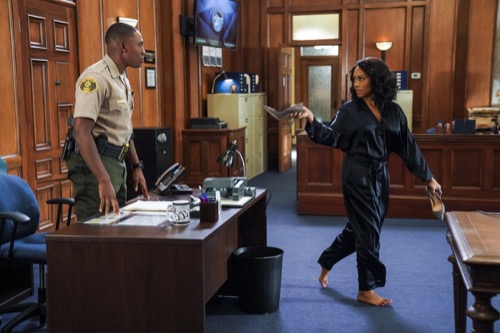 Tonight on CBS their new series All Rise airs with an all-new Monday, October 21, 2019, season 1 episode 4 called, “Devotees in the Courthouse of Love,” and we have your All Rise recap below. On tonight’s All Rise episode as per the CBS synopsis, “Lola officiates her first nuptials on “Wedding Day,” an annual event when couples flock to the Hall of Justice to be married free of charge.

Also, Lola and public defender Emily Lopez are torn between civil laws and the laws of a higher power when it seems they must allow Phoebe, a nun with a shady past, to go to prison for a criminal act against the church that she believes is morally right.”

Tonight on All rise, Its wedding day at the courthouse, Emily is still wearing her engagement ring cause it’s stuck on her finger. Judge Lola is asked to officiate her first wedding to a woman in labor on the courtroom floor who wishes to be married before the baby’s birth.

Emily has to defend Phoebe a nun who is accused of stealing 100k from a church. No one at the church has actually seen her take the money but she’s the only nun that was taken into the church from off the street.

As the case goes omg it seems as if another sister named Miranda may be hiding the truth as she testifies on the stand about who really took the money because she is the church accountant and had access to the money, as she’s questioned further she makes statement to suggest she knows who really took it or it may have been her who did, just as she’s about to say Judge Charmicheal asks the lawyers to approach the bench and take a recess to find out what’s going on.

Emily asks Phoebe why she is taking the fall and says because Sister Miranda not only has helped her from her life on the street but is sick and wouldn’t last long in jail. Emily goes to talk to Sister Miranda and tells her she needs to confess to taking the money but Phoebe is against it and instructs Emily to defend her.

Judge Carmichael has slipped out of her chambers and into the public space which she was advised not to go by her J.A Kansky, she is then approached by the wife of a man the judge has sentenced to jail but before she is attacked the woman is detained.

Callan is going after a named Margo, a woman who has dated 12 men and skipped out on the dinner bill for each one. Amy Quinn makes her case that one of the men was speaking perverted to her and that’s why she left the date early. Callan is still trying to prove she is a con artist and seeks an offer to settle the case from Quinn but she doesn’t give him that option.

Emily tries to take off her engagement ring in the bathroom under running water but fails, she and Judge Charmicheal have a heart to heart about doing the right thing for her case.

Emily calls Phoebe up to the stand to testify and try to prove her innocence but as she asks her did she take the money Phoebe has an outburst saying she is guilty and wants to tell the truth. Emily tells Phobe she is committing forgery and will step down as her lawyer.

Sister Miranda takes Emily to her car where she shows her the money in the trunk where she tells her she was going to use the money to give to the poor, and sick not to fix the rectory. Judge Charmicheal finds Phoebe guilty of a misdemeanor but sentences her to 100 hours community service with her priest father Vincent

Callan calls a detective Perry to the stand to testify against Margo who says the crime can be felony extortion, Quinn then dismantles the Detectives testimony by making it seem he went after Margo only because she is a woman and the judge dismisses him.

The case is won and Mago isn’t charged with running off $10,000 worth of meals. Callan has lost but he lets Margo know he’s given her picture to all the upscale restaurants and she’s been banned.

Wedding day at the courthouse continues and judge Benner officiates the weddings as a group, Watkins helps Emily take off her engagement ring with dental floss and she decides to give the family ring which is an heirloom back to her ex-fiancé mother.