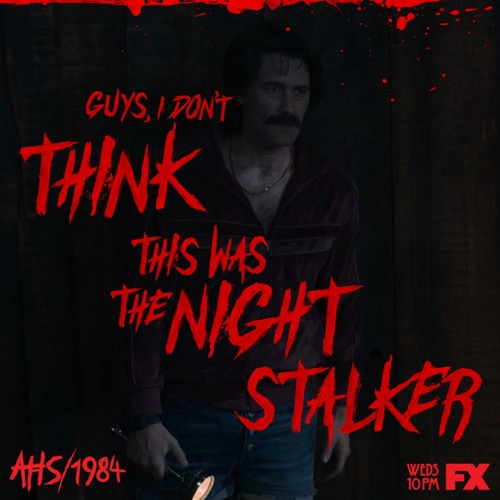 Unfortunately, the Night Stalker did forget about his pledge. He ignored the part where he promised Margaret to kill Mr. Jingles and now he’s just focusing in on killing Brooke. Brooke was the one that got away, after all. She fought him off last time at her apartment and she escaped when he tried to go after her by the water. She apparently pissed him off when she did all of that. The Night Stalker was both crazy and a slight misogynist. He didn’t like being beaten by a girl. The Night Stalker was so set on killing Brooke that he wasn’t afraid to show his face and so everyone inside the cabin could see he wasn’t Mr. Jingles.

None of the other counselors had believed Brooke when she said the Night Stalker was after her. They first thought it was a cry for attention, but they started to believe her once they saw the Night Stalker did follow them from LA. He did that and he was hunting her. The Night Stalker was talking about killing some evil bitch. Which they all knew he was talking about Brooke and so Ray for one didn’t want to die for her or listen to reason. He said they should all take their chances by running off in separate directions.

The others tried to tell him that they would be safer together. It was Ray, Chet, Brooke, and Nurse Rita and that was four against one. They could have taken down the Night Stalker if they all worked together. Only Ray didn’t want to do it. He said survival of the fittest and therefore they all thought it was fitting when he ran right into the Night Stalker. The guy had found a way into the cabin. He only one had the one knife and it turns out Ray could fight him off alone. He was doing that while the other three were running for their lives.

Chet ended up falling along the way. He fell into a pit that had spikes in it and that’s where Ray later found him. The women, however, had gotten away. They made it to the car and that’s when Brooke suggested they go get help. She thought she could flag down a patrolman on the highway. Rita said she wanted to stay behind for the others, so she handed Brooke the keys to her car and Brooke didn’t suspect anything was wrong until she turned her back on her. And Rita attacked her for no good reason.

Rita used a drug to knock out Brooke. She didn’t want Brooke getting help because she wasn’t really Rita. “Rita” was Dr. Donna Chambers. She was obsessed with serial killers and understanding them. So much so that she talked to most of them. She even fell for their line that they weren’t born bad. Donna believes that outside forces and possibly the Vietnam War was brought out about this increase of serial killers. The only thing she was missing to prove her theory was a controlled test. It was right around this time that Donna went to go see Mr. Jingles and she talked him into getting revenge on Margaret.

Margaret was the one that got away from Mr. Jingles. He was obsessed with her and he didn’t need much to convince him to break out. He simply took Donna up on her offer. She told him how to get outside and she left him everything he needed by the bushes. Mr. Jingles grabbed his raincoat as well as his knife. She also left him his keys and so Donna set this whole thing up. She released Mr. Jingles back in the wild because she wanted to watch his killing spree for herself. She also kidnapped the real Nurse Rita.

Xavier, Trevor, and Montana found the real Rita. They tried to help her, and she was so confused that she pushed them away in order to make a run for it. But she did not get far. The real Rita ran right into Mr. Jingles and he promptly killed her. The three later saw her body so they saw her tag said ‘Rita’. It made them realize there was a real one and a fake one. The fake one was with Brooke and that wasn’t good when they ran into Ray. Ray told them that the group split up. He said the women were together and he left out everything else.

Ray was perhaps the biggest coward there is. He saw that Chet fell into the pit and he left them because he revealed too much of himself. Ray had revealed that he killed a guy back in LA. It started off as disposing of a body when someone accidentally fell down some stairs and it turned into realizing that the guy wasn’t dead until after he sent him off a cliff. Ray, therefore, killed someone. He admitted it to Chet when he thought Chet had passed out from pain and it gave Ray the excuse he needed to run when he found out Chet had heard everything.

All Ray wanted to do from the beginning was runoff. He left Chet behind and he left that part of the story out of the other group. He just told them that he wanted to go get help. Ray got the keys for the motorcycle from Trevor and he was supposed to take Montana with him. The motorcycle could have fit them both. It wasn’t a problem until they ran into the Night Stalker and Ray decided to leave Montana behind. He left her to get killed. He didn’t know that she would go on to kiss the Night Stalker or that they were secretly working together to kill Brooke.

Ray just fled. He was driving the motorcycle when Mr. Jingles stood off to the side and chomped off his head before he knew it. Leaving Ray dead and again no one calling for help. Brooke tried and she was taken, prisoner. Ray tried and he died. There really was no way out of that camp. The others still didn’t know that yet and so they thought about fighting back. Xavier and Trevor gave up their chance to flee because they wanted to save everyone they left behind. And so while they were looking for their friends, they came across Chet.

They even helped him get out of the pit. They did it without harming him and they were going to hide him away when they ran into Mr. Jingles’s fan. This one wasn’t Donna. It was a townie who dressed up as Mr. Jingles with his friends every year and caused mayhem on the anniversary of the camp massacre. The guys had mistaken this fan for the real thing. And they pushed into the pit thereby causing great harm.

And yet this accidental assault wasn’t on them. The fans were dumb enough to idolize a serial killer and so they deserved to get hurt. Two of them were later killed by the man himself. So, Mr. Jingles was now targeting counselors as well as Margaret as well as some of his own fans.

And Donna was off somewhere watching it all in action.