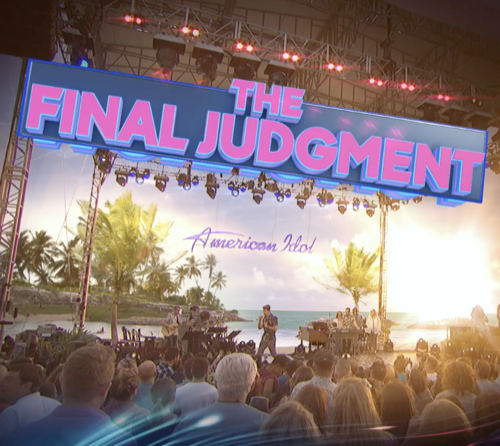 It’s Another exciting night of American Idol on ABC tonight with an all-new Wednesday, March 31, 2019,  season 17 episode 8 called “Showcase/Final Judgment” and we have your weekly American Idol recap below. On tonight’s American Idol season 17 episode 6 as per the ABC synopsis, “At Aulani, a Disney Resort & Spa in Ko Olina, Hawaii, the show’s Top 40 contestants perform on the beach in front of a live audience and the superstar judge panel.

Following the performances, the judges sit down with each contestant to reveal their fate, culminating with the show’s Top 20 finalists.”

American Idol is in Hawaii with the remaining 40 contestants, they might be in paradise, but this isn’t a vacation; half of the contestants will be sent home. Tonight is the final judgment.

Alyssa Raghu is up first, she is singing “Dear Future Husband” by Meghan Trainor. The judges loved her performance and she makes it through to the top 20. The second time is a charm for Alyssa, in American Idol 16, she made it to the top 24.

17-year-old Madison VanDenburg sings “Wo’s Lovin’ You” by The Miracles. Lionel tells her that he is very pleased that she is able to handle the pressure. Madison says her last performance was the best night of her life, Lionel announces that she has made it to the top 20.

Myra Tran Minh Nhu was the X-Factor Vietnam season 2 winner, she is singing “How Far I’ll Go” from Moana. Lionel tells her that her talent is amazing, her potential unbelievable and experience will only help her to get better. He goes on to say that her performance was not 100% like her audition and she will not make it to the next round.

Logan Johnson decides to sing a song in English/Spanish and the judges are clearly pleased with his decision. Luke delivers the news to Logan that he has made it to the top 20.

Nate has a lot to prove to the judges after his lackluster performance when he was ill. Nate is singing “Still” by the Commodores. The judges loved it and Lionel pointed at him. Lionel tells him that he has all the voice in the world, he has all the abilities. Sadly, Nate doesn’t make the top 20, he is very disappointed, he had all this hope that he was going to get a yes.

Demetrius Graham is next to get his dramatic news, Lionel tells him that he wants him to sound like him, not someone else. In Demetrius’ final performance, he sang “Disclosure” by Sam Smith, and it is more than enough to get him to the top 20.

Ashley Hess is singing “Feel A Way” by H.E.R. Luke calls her performance a little sketchy. Ashley says she does better at the piano than with a full band. Luke says they thought she would be top 10, but for sure they know that right now she is top 20.

Drake McCain is singing “Girls Like You” by Maroon 5. Katy says they love that they could see his growth and were very surprised the way he was interacting with the audience. Drake says he just went up there and had fun. Katy says that he was straining with some of the notes and unfortunately he did not make it to the top 20.

Kalifa Wilson is singing “Wild Things” by Alessia Cara; the judges seem to be enjoying her performance. Kalifa feels like she has grown so much and hope that this is not the end. Katie says the first time they met her they loved her and believed in her; but she won’t be making to the next round. Luke says that the problem is that with all her vocal performances, they just were not 100%.

Laci Booth is singing “Georgia On My Mind” by Ray Charles, Luke says she is special. Katy thanks her for being on this amazing journey with them, and tells her she is going through to the top 20.

Nick Townsend lost his two brothers to suicide but he feels lucky to be brought up to never give up. Nick was on the Voice seasons 12 & 13 Blind Auditions, for this performance he is singing “Hold Back the River” by James Bay. Luke tells Nick that his story has really affected them, it really shook them up. Luke says that his last performance was not the best that they have seen and he did not make it to the top 20.

There are more fan favorites that did not make it through; Clay Paige, Kason Lester and Johanna Jones.

Walker Burroughs is happy to perform in Hawaii, his sister lives there and will be at his performance. Walker is singing “Youngblood” by 5 Seconds of Summer. Lionel says he has to work on his live show, but he has made it to the top 20.

Ryan Hammond is singing a song that his partner chose for him, “A Song For You” by Leon Russell. Katie says whatever he has been doing has really been working for him, he is in the top 20.

Evelyn Cormier sings “No Roots” by Alice Merton. Kate Barnette sings “Royals” by Lorde. Both girls make it to the top 20.

Emma Kleinberg takes to the stage with “Is This Love” by Bob Marley and she is hoping to make her family proud. Lionel says she has a solid voice, Katy says she was great and they love her sound. Katy tells her that she needs to find more sparkle and unfortunately it is not going to be in the top 20.

Uche Nbubizo is singing “Play That Funky Music” by Wild Cherry. The judges are loving his performance, Katy looks speechless, Luke calls him a rascal. Lionel tells Uche that he killed it and gave them a voice that they had never heard before, the stage presence was a natural gift. with great debate and great discussion, he made it to the top 20.

Alejandro Aranda is singing “Yellow” by Coldplay, Lionel loves the performance right from the beginning. Katy says that he took a risk trying out for American Idol and his final performance was special, and he is in the top 20. Alejandro says he doesn’t know how to react, Katy calls him a pop star.

Jeremiah Harmon is singing “Landslide” by Fleetwood Mac. Katie says they have a lot in common because they are both pastor’s kids. She says that she sees him, she loves him and accepts him. Additionally, he has made it to the top 20.

Shayy sings “All I Ask” by Adele. Lionel says it is their job to inspire the audience, and that is what she does. He goes on to say that Amerca has fallen in love with her, the potential she can go with his is endless, she didn’t make the top 20, but he thanks her for what she has given them. Katy says she is inspired by her strength and bravery.

There are more that also reached the end of the Idol road; Mica Giaconi, Payton Taylor and Idalis.

Riley Thompson sings “Mama’s Broken Heart” by Miranda Lambert, she is the youngest contestant trying out at 16. Luke says they have classified her as America’s country sweetheart, and she is in the top 20.

Raquel Trinidad sings “Rich Girl” by Hall and Oates. Shawn Robinson sings “Rock With You” by Michael Jackson. Cristina Contreras (Bumbly) sings “Baby” by Clean Bandit, Marina & Luis Fonsi. They are all going to the top 20.

Wade Cota sings “Work Song” by Hozier and he is worried because he is not classically trained. Luke says that he going to get back on a plane and go home, then come back to Hollywood because he is in the top 20. Wade says it is crazy, then asks why? He is so surprised.

Margie Mays sings “All About That Bass” by Meghan Trainor. Margie thinks she owned the stage, but vocally it wasn’t her best. Eddie Island is singing “Don’t You Worry Child” by Swedish House Mafia Feat. John Martin. Both are called in together to see the judges. Katie says they are looking for the full package, and they did not find that balance with Margie, this is the end of the road. Eddie made it through the top 20.

It is the final judgment between Laine Hardy and Tyler Mitchell. Unbelievably Laine was cut last year in the same spot. For their final performances, Laine sang “Come Together” by The Beatles and Tyler sang “Suitcase” by Steve Moakler. Sadly there is only one spot left. Luke tells Tyler it is the end of the road. Laine made it to the top 20.