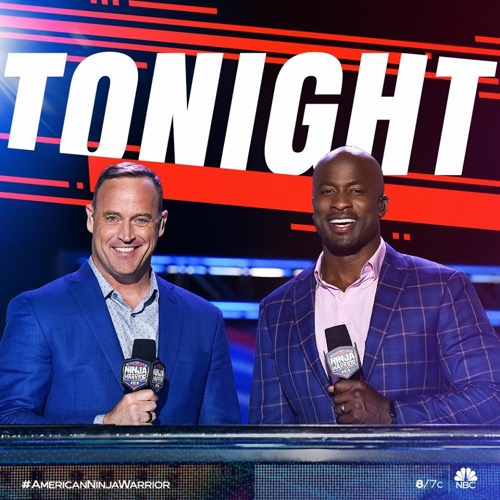 The elite few who conquer stage three move on to stage four, a final climb up Mt. Midoriyama, which they must complete in thirty seconds or less.”

A new record was set this year. There have never been as many ninjas going into Stage 3 as there is now and frankly that was astonishing. Especially when you take in how many seasons there’s been. The ninjas have all shown how much they want Stage 4 and so they first had to survive Stage 3 tonight. The first ninja up was Ryan Stratis. He was last in Stage 3 eight years ago in Japan. He fell victim to the Ultimate Cliffhanger back then and he wanted a rematch tonight.

However, it wasn’t meant to be. Ryan fell early on and there went his chances at Stage 4. The next ninja, now, was Michael Torres. He started his run in a great position and he made it past the second obstacle (unlike someone else). Michael was doing great until it came time to dismount from the Ultimate Cliffhanger. He had slipped off the landing and fell right into the water. There was literally he could have done about it.

The hardest obstacle tonight was the Ultimate Cliffhanger. Chris DiGangi, who went next, had tried making the jump from one leg to the other of this obstacle and he fell. So, this obstacle had knocked out two contestants by the time Ethan Swanson went. He was the last of the Chicago Ninjas and he went the same way as his buds Chris and Michael did. Ethan ended up falling into the water when he tried to dismount.

This one obstacle was the biggest trial there was. Therefore, it became the one to beat. The ninjas just needed to pass this one obstacle and everything else might as well be smooth sailing. The next ninja up was Lucas Reale. He still sort of a newbie on the circuit and yet looks how far he ended up. He got to the Ultimate Cliffhanger and became the first to properly dismount. Lucas took a break in that moment just to celebrate what he did.
Type a message here

Lucas still fell before the end, but he was still the first to solve the Ultimate Cliffhanger and his method might as well have taught the next person what to do. Joe Moravsky, for one, had made it past that blasted obstacle. He even had an additional drive this year because he went into tonight wanting to overcome his own bad luck. Joe has fallen several times at Stage 3. It’s almost ridiculous how many times he’s fallen and so he wanted this year to be different.

Joe made it past the Ultimate Cliffhanger. He also made it the farthest in the competition when, out of nowhere, he moved too aggressively and fell. RJ Roman tried going next and fell on obstacle two. Drew Drechsel, however, was different. He was known as “the Real Life Ninja” and he wanted to prove that tonight. He’s been pushing himself all year just for his run and with a baby on the way – a million dollars wouldn’t hurt.

Drew started his run as perhaps the strongest competitor. He was fast and he was efficient. He made it past the Ultimate Cliffhanger and Pipe Dream, and it turns out the sailing from there was easy. Drew flew through the rest of the course and became the first finisher of Stage 3 tonight. He was so happy afterward that he actually started to cry. Drew was the first to make it to Stage 4 in a long time.

It begged the question if he was going to be joined by anyone else. The next ninja was Karsten Williams otherwise known as the Big Kat. This veteran has been around for a while and this seemed to be his year. He had great showing in Stage 1 and 2. He appeared to be doing well at Stage 3 when he lost it on the Pipe Dream. Karsten fell because of two reasons. There was the grip strength and there was also the fact he was heavy.

The Big Kat was called that because he was huge. He was tall and weighed 175. He couldn’t have held onto a slipping pole with that much weight dragging him down. He needed to be leaner. Like Seth Rogers. Seth was known as Big Red and while he was tall, he wasn’t all muscle like Karsten and so that helped. He got past the Ultimate Cliffhanger and the rookie was doing well right up until the fourth obstacle. That’s when he slipped right off.

Big Red went the same route as Big Kat. Nate Burkhalter also didn’t have that much luck. He fell and so did Kevin Carbone for that matter. Stage 3 was not easy. It was brutal and the next person it test was Kid Owhadi. He was considered one of the strongest ninjas this year and yet he fell because of a simple mistake. He placed his hand over the other when he was climbing the Ultimate Cliffhanger and so he had nothing to grip much less counterbalance his weight.

Most of the ninjas that fell, had done so, because of simple mistakes. Karson Voiles was the next person to fall and on it went until Adam Rayl. He was the one that was different. Adam seemed to sail through most of the course and the first time he faced a true obstacle was when he ran into Cane Lane. That was the obstacle that sapped him of his strength and so he had nothing left to make the transfer.

Adam fell because he had sapped most of his energy at the end. Its not that he couldn’t have done the rest, but all that muscle tired him out and he must have forgotten how to properly handle his weight distribution. Else he wouldn’t have fallen. Josh Salinas went next and his run ended so soon that didn’t seem to count. But Daniel Gil went after him. Daniel was a hardcore veteran whose been dying for his chance at Stage 4.

Daniel has been working all year towards this moment and, no matter what, everyone knew his run would be special. Daniel was just that sort of person. He wore his signature grip as he sped through the course. He even made every single obstacle look simple and so it wasn’t surprising at all when he became the second finisher of the night. He and Drew were usually even with the other, so it made perfect sense that they would be competing against each other and neither would have it any other way.

Drew and Daniel are friends. They’ve been training together this whole time and they were also pretty decent people. Both use the ninja gyms to teach the youngsters coming up how to handle ANW. So, they’ve earnt this moment. The ninjas competed against each other in the final round. Stage 4 was all about timing. Whoever climbed the rope the fastest would win the million dollars and they only had thirty seconds on the clock.

Drew went first. He first just used his hands to pull himself up and he didn’t really use his legs until he reached fifteen feet. That’s when he had to put everything into it, but he hit the buzzer at 2:54, so it was up to Daniel to beat that time.

Daniel tried to do it. He put everything into his climb and unfortunately time ran out.