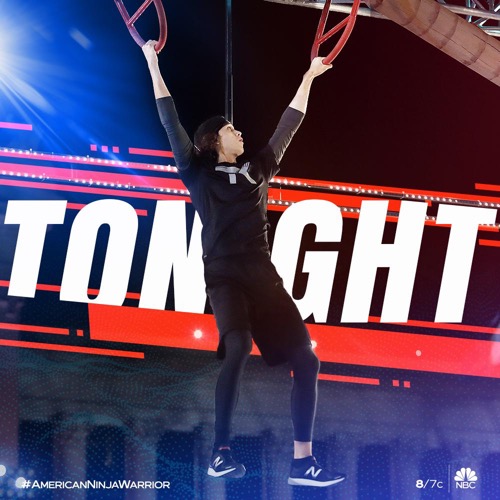 Tonight on NBC their obstacle course competition American Ninja Warrior returns with an all-new Monday, June 17, 2019, episode and we have your American Ninja Warrior recap below! On tonight’s “Seattle/Tacoma City Qualifiers,” season 11 episode 3 as per the NBC synopsis, “Competitors include Barclay Stockett, Mathis Kid Owhadi, Daniel Gil, Olympian Jonathan Horton and more face up to six challenging obstacles, including Diving Boards and Coconut Climb, which are new to the course this year!”

The first contestant to try out this new course was Karen Wiltin. She was a rookie last year and managed to enthrall the crowd as she became one of the toughest ninjas there was in the women’s division. The women have been bringing this season and Karen showed she was faster than ever as this mother to two quickly navigated her way on the course. She was the first to take on the Wing Swing and the first to take on the Coconut Climb, but she was 5’4 and came up just a little bit short on the obstacle. She couldn’t get enough speed to carry her over and her arms eventually tired. Karen fell on the Coconut Climb and she will have to see if her timing and progress was enough to get her into the City Finals.

Over the commercial break, several ninjas attempted to carry out the same success and all failed. Even veteran Artis Thompson III who fell face first into an obstacle. It was painful and it was probably painful to live through as well. So everyone hoped this next contestant would fare better on the course. Tom Mortimer was making his first run tonight in honor of his son Landon. The family naturally wanted to ease his suffering and they tried a bunch of medications before finding a regimen that worked for him. Landon hasn’t had a seizure in a month and the family was hoping for the best. Tom said seeing his son never give up had inspired him to try and so he came here tonight to honor his son but also to raise awareness.

The family hopes that one day there will be a cure for the many afflicted with epilepsy. This was Tom’s end goal and in that he did achieve something. He helped raise awareness and he showed his son that taking on the course was possible, but unfortunately, he fell on the fourth obstacle. He too will have to wait and see if he made it to the City Finals and until then it was onto the next one. There were ninjas that didn’t get as far and there was a boyfriend that failed to make it far. His girlfriend, on the other hand, had gotten to the fifth obstacle. Taylor Amann was a college pole vaulter and she was doing great in the competition until she came across the Coconut Climb. No one has made it past that particular obstacle and so it was disappointing when it managed to take out Taylor as well.

Taylor had been the latest to fall victim to the tropical-themed obstacle, but she was far from the last. It took out its share of contestants and even the crowd wasn’t sure if there would be anyone to beat it. Then came David Wright. He was a rookie that’s trained with the Kid and Daniel Gill. He was already known as “The Cake Ninja” because he really loves cake. David comes from a large family and there were a good five birthdays in October alone. So he’s had plenty of opportunities to give into his cake urge. David said that’s his secret to be amazing and it must be true because he was first to make it past the Coconut Climb. And he became the first to make it to the Warped Walls much less hit a buzzer.

With David to the lead the way, the next couple of ninjas should have played it smart and followed his methods on the obstacles. But, none of them did! They tried to do their runs their own way and so the next several few were all a bust. This included the Screaming Ninja who sadly fell on the fourth obstacle. Maggi Thorne went next and she was known as the SuperMom. Her pink bows have become a signature on the course and she says she wears it to remind herself what it was like to be a little girl because at that age girls knew that anything could be possible. Maggie goes around the country on speaking tours and she tells girls to never give up. She wants them to remember that anything possible and she’s showing them that women could be ninjas too.

Maggi fought her entire way through the run and she almost fell on the Diving Boards. She only just managed to hold on by her fingertips and so once she came back from that there was nothing she couldn’t do. She became the third woman to make to the Coconut Climb and she had almost made it when she couldn’t get over the last hurdle. Her arms tired on her and she soon falls into the water, but she made good timing and so she might make it to the City Finals. Now the next contestant was a familiar face. Matthew Day was a veteran known for his speed and he was barely on the course before he found himself going up a Warped Wall. It wasn’t surprising that he became the second finisher. The real question was if he will be going against Daniel Gil on the Power Tower.

Another strong female ninja went up before long. Barclay Stockett was one of the most popular ninja athletes and she actually began her career there in Oklahoma. She fell on the first obstacle last time, but she wanted to show tonight how far she’s come. Barclay, or the Sparkly Ninja as she’s known, was on the shorter side and so she wowed everyone as she showed she was strong from the start. Barclay was one of the few women to make it to the Coconut Climb and she had almost dismounted when she lost her grip. To have come so close and not make it was disheartening though she was bound to be in the City Finals. And so it was onto the next one with the Big Dog Ninja.

Jody Avila was known as the Big Dog Ninja because of his tremendous height, but there was another reason behind the name. He was also a big dog to his sons’ little dogs. Jody and his entire family did ninja training and his son was even considered the best ninja in their house. The little boy acted as his father’s coach and he was cheering on his dad as the Big Dog had an impressive run. Both Big and Little Dog wanted dad to get that extra ten thousand by going up the Mega Warped Wall and despite being amazingly tall – Jody fell a tad short. He failed to make it up the wall on all three tries and so he didn’t get to end his run tonight as a finisher. And yet he may still get through to the City Finals because of his speed.

Afterward, there were several finishers in a row during the commercial break and then the show came back to pick up with Leigh Jahnke. Leigh was a rookie from Nebraska. She was raised on the family farm that has been in the family for over a hundred years and she’s turned that farm into a ninja gym. Leigh said that was no better place to work out. She was a reigning high school champion wrestler after all and so she knew what she was talking about. Leigh just didn’t know how hard the course would be. She struggled from the onset and she had to fight her through several incidents before the final one knocked her out of the competition. This may have been her first time on the course, but she had fun and she was clearly coming back next year.

Karsten Williams went next and the audience will have remembered the six-time veteran as his mother’s Big Cat. His mother Linda Joshua has supported him in everything no matter what. It didn’t matter if it was big or small, she would be there and she would be cheering him on. She was also his ninja coach. She’s taken care how she trains him and this year they had eyes on the Big Warped Wall. Karsten suffered a few setbacks on the course and, despite it all, he still preserved. He eventually reached the Warped Wall and of course he went after the Mega. His first try didn’t get very far, but his second got him five thousand dollars. So maybe hopeful ninjas should look into hiring Linda!

Now, the next ninja was some quickly won over hearts last year. Quest O’Neal was a basketball player that took everyone by surprise as a rookie and now she’s returned as a veteran. She’s also brought along a friend. Layla was a little girl that was adopted from Uganda by Caucasian parents and seeing Quest on tv had won her over because she said they had the same hair. Layla’s parents reached out to Quest after their daughter said that and Quest and Layla have since become firm friends. Layla was even there tonight to cheer on Quest and so the results this time around hadn’t mattered. What mattered was that Layla got to see someone that looks like her do amazing things and that never once did either of them feel alone.

The next contestant was Daniel Gil and there wasn’t much that could be said about him because he had already raced through the course by the time they finished checking in with his wife on the sidelines. He was just that fast. Daniel raced through everything and for the second year in a row he managed to take on the Mega Warped Wall on his first try. It won him another ten thousand and his speed alone meant he would be competing in the Power Tower. But there was one last ninja to go and this final run that would determine would be up against Daniel. As it turns out it was his protégé Kid Owhadi that went last. He too raced through the course and the only difference between him and Daniel was that Kid didn’t make it up the Mega Warped Wall on his first try.

The kid came up on short on his next two tries as well and so he didn’t get the money or the opportunity on the Power Tower.

No, the final race was between Daniel Gil and Matthew Day. The two fastest finishers raced each other up a tower and the first one to finish was Daniel.

Daniel Gil received the Speed Pass and its allows him to go right to the National Finals.