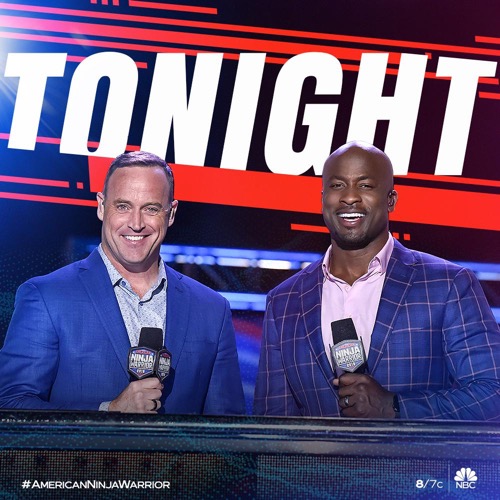 Stage one features eight obstacles, including “Roulette Row” and “Diving Boards,” and must be completed in under 2:30 minutes to advance to stage two. Finalists vie for a $1 million prize and the title of “American Ninja Warrior.”

Las Vegas, one of the most exciting cities in the world, and tonight it’s even more thrilling because of Night Two of National Finals!

Caleb Bergstrom was up first. He was part of the Bergstrom Bunch and the family was prominent on the ANW circuit. His dad was a ninja, his older brother was a ninja, and this year Caleb tried out with his sister Caitlyn. They were the first brother/sister duo to make it to Vegas and they both wanted to be first siblings to hit that buzzer together in Stage 1. Caleb has so far shown great aptitude as a ninja and surprisingly his season came to an end on the Diving Boards.

The Diving Boards took out several notable ninjas during Night 1. So, it seemed fitting that the first casualty of the game would happen on the same obstacle, especially as it served as the perfect teaching moment. It showed that anyone could fall victim to even the simplest obstacles. Caleb learned ended up learning that lesson and he passed on to every ninja after him. The next Ninja was Nick Hanson. He was known the Eskimo Ninja.

The Eskimo Ninja came from a small town in Alaska. He practiced for ANW by ice jumping and he said that standing on shifting ice had helped him prepare this year. He was cursed with going out on the eighth obstacle and it happened more than once. He’s either jumped too low or didn’t get a good enough grip, so everyone had been cheering for him to get past this obstacle and it was just unfortunate that ended the way it did.

Nick showed signs of struggling back on the Diving Boards, but he didn’t fall until the eighth obstacle, so the curse struck again. The next ninja was Taylor Amann. She was a newbie and when she wasn’t doing this then she was a model. She was hoping to one day become as famous as Jessie or Meagan and until then she wanted to start out with a buzzer. She seemed to be holding her own and then the Jumping Spider happen. She jumped right off the obstacle and there went her season.

The next ninja was Casey Suchocki. Like usual he had his grandfather there cheering him on and this time he also had his new wife. Casey was married last year and it had been perfect. The wedding was perfect and so was their honeymoon. They even built the perfect house when they came home. His wife had put her foot down on incorporating obstacles around the house and so he turned their backyard into his playpen.

He must have been practicing every day too because Casey became the first finisher of the night. He was later joined by Seth Rogers. Rogers was a newbie this year and he’s been watching the show since he was a kid. He’s been such a fan of ANW that he started going to Ninja gyms when he was small and all that effort came in handy when he became the second finisher of the night. With several highs this season, there were also certain lows.

Tiana Webberley made it all the way to the Warped Wall, but she struggled with making it up the wall itself and was never able to regain her momentum. Then there was Brian Burk. He was such a great champion for high functioning autistic kids and he was also a hero for the very tall, except his tallness worked against him on the third obstacle and he was out. He luckily hadn’t injured himself as Sean Bryan did.

The Papal Ninja injured himself on the Jumping Spider. His arm had reached out and his arm was pulled out of his socket. The was arm later put back in, which had been a relief for Sean and his family and so it was just poor timing that it came at the cost of his season. The next ninja to have their run was Karsten Williams. He was known as the Big Cat and he too had a curse. He kept falling during Stage 1.

Its been like that for the past five seasons. Karsten would make it to Stage 1 and then he would fall one obstacle or another. It was the curse that he wanted to live down. It wasn’t so much about the buzzer, it was the curse. The Big Cat started out quick out of the gate and he probably had the best season of his life because this time he actually hit a Buzzer. It was the first surprise of the night and it wasn’t the last.

Drew Drechsel had his run next. He was known as the Real Life Ninja because there wasn’t a single person that doubted him and so he took everyone by surprise when he fell on Tire Run. There was genuinely silence after that because everyone was in shock. The noise didn’t pick up again until they remember he has the Safety Pass and that he could run again. He was going to run later on in the night, so while the audience was waiting, they heard from several ninjas during the commercial break.

There won’t be any naming of names because none of the ninjas made it to a buzzer, but the first ninja after the commercial break was Alyssa Beird. She tried to be careful on Tire Run because she must have seen Drew’s fall and in trying to be too careful she ended up falling for because of a lack of momentum. Next up was Ben Uddy who went by Chad Flexington on ANW. It was his alter ego and as it turns out a mullet wig wasn’t going to save him from the third obstacle.

Ben was out and up next was Jody Avila. He was known as the Big Dog. He was given that nickname because he was almost seven feet and so it was funny how the Big Dog Ninja was afraid of dogs. He was bitten on the ankle once and jumped into the back of his pickup truck to escape. Overall, it had been very embarrassing. Jody tried to live it down and he knew the best way to do that was to get over his fear. He visited a kennel to meet a sweeter dog and that alone helped him with his fear.

Jody can now say his name with honor. It didn’t stop him from falling into the water, only there will be more seasons and so tonight was just a personal setback. The next ninja was Ethan Swanson. The Swan Ninja has always been a showman and he was again that tonight when he hit the buzzer with the fastest time. He and his friends even threw in the Swan dance at the end just for good measure and he really did kick things off.

Several ninjas went on to hit the buzzer over the commercial break. They were actually too many to count and the luck even extended to the Island Ninja. Grant McCartney was struggling before then. He’s been struggling for the past few seasons and this season seemed the way when he failed to make it to Vegas with a buzzer. And that all changed tonight when Grant managed to hold on despite everything and hit a buzzer tonight.

It was the first time in a while that the Island Ninja truly had something to celebrate. After his run, Drew had his chance to give the course another go. This time he fixed his mistakes on Tire Run and was able to press a buzzer. And all it costed him was his Safety Pass, the same Safety Pass he was hoping to use for Stage 2.

But there was so bad news in the middle of all of this. Jessie Graff fell on her run and this was an end to her season.

The last ninja to run was the “Kid” Owhadi. He has his Safety Pass as well and he didn’t need it, either. He managed to press the buzzer with the fastest time on the clock and he ended Night 2 on a high note!