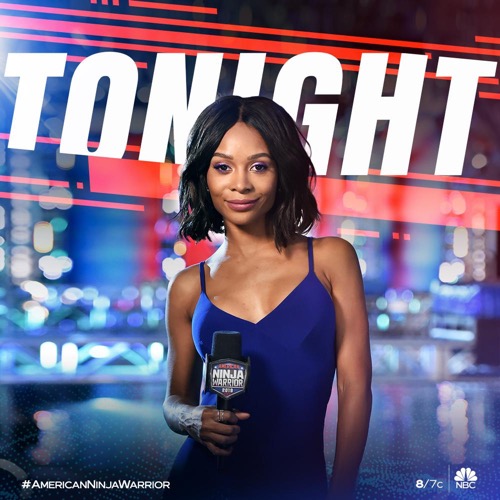 Six dynamic obstacles await them, including three brand new to the course – “Giant Walk The Plank,” “Snap Back” and “Grim Sweeper.”

The remaining twenty-eight took on Stage 2 tonight. Rarely, has anyone ever surpassed Stage 2. These Stages, from the first to the very last, got more difficult as time went on and many ninjas have gotten knocked out by this point. There was the one guy that did Stage 2 – 4 and won the whole thing but he was one guy and his run at the time was carried out by pure luck. The same man had tried to come back to ANW scene last year and crashed out before Nationals.

The poor guy couldn’t take on the new ANW. With its bigger and more dangerous obstacles, the guy had to take a seat and several ninjas were allowed to rise. They no longer were encumbered with tales of the ultimate ninjas. They could now just have their own runs and the first ninja to do so tonight was Dan Polizzi. He was one-half of the towers of power with his friend and fellow Chicago firefighter.

Dan’s friend had fallen at Nationals. He, therefore, left it up to Dan to go all the way and Dan later took fall on Stage 2. It was unfortunate but one fall was all it took to knock out a ninja. There were exceptions of course because this is a game and the first one that comes to mind was the Safety Pass. It was named that because it really does safeguard these ninjas. See, the Safety Pass allows someone to redo their run if they fall.

The Safety Pass also just works once. Most of these ninjas try to hold onto it for Stage 2 because, again, Stage 2 was a killer and sadly some of them were forced to use it during Nationals. The Nationals knocked out a few champions and so it’s not like that was easy either. The ninjas did what they had to do back then. They were still doing so now and that meant many didn’t have their runs with a safety net like the “Kid” Owhadi.

The Kid was one of the youngest ninjas on the scene and he quickly made a name for himself as someone to watch. He beat out his protégé for the Speed Pass and he ended up using it on his run when he fell with just two more obstacles to go. The Kid will run again later on. The next ninja was Karson Voiles and he too fell, but he was another one with the Safety Pass, so it was onto the next one.

The next ninja was Nate Burkhalter. He almost missed out this year because he got food poisoning at the last minute and so it’s a good thing he recovered just in time. Nate happens to have tested out one of these obstacles last year. He had fallen so bad at the time that he had to be hospitalized and required physical therapy in order to get back in shape. So he really wanted this redux. He thought he could take it on and everyone was glad that he did.

Nate became the first finisher of the night with mere seconds left on the clock. His run had been perfect and it gave the rest of the ninjas a plan on how to get through Stage 2. The next ninja was Dave Cavanagh. He was called King of the Walk-Ons because this was the first year, after many years, that he finally received a call to come back to the show. He usually had to stand for hours on end to just to get on and so he was hoping this year would be it for him. And it wasn’t.

Dave ended up falling because he hesitated when he shouldn’t have. Michael Torres went next and he almost hesitated, but he pushed through and went on to become the second finisher of the night. There were also several ninjas that had their run over the commercial break. There was the third finisher in the bunch and congratulations to him. But the next ninja after the break was Flip Rodriguez.

Flip was someone who wasted his Safety Passback at Stage 1. He’s never pressed a buzzer on Stage 2 and he tried to do so tonight at a disadvantage. He had injured his leg. Flip tried to hobble his way to victory and he ran out of steam as well as time. Flip lost out when he failed to get to the buzzer in time. Moving on, Karsten Williams went next and the Big Cat became a finisher over the commercial break.

Adam Rayl meanwhile was the first ninja when the show came back. He’s never made it past Stage 2 before and so tonight was the first time he pressed a buzzer for it. Adam had had a great run. He gave himself plenty of time on the last two obstacles and his work on his upper body strength really came in handy. Adan was also joined by several finishers over the commercial break and so this year Stage 2 wasn’t so scary.

Grant McCartney went next. The Island Ninja was looking for love online and his fellow ninjas were there to help. They told him he needed to show more abs in the photo, they helped figure out what to write in his profile, and they knew there was more to him than the happy-go-lucky attitude. Grant was looking for genuine love because he wanted to start a family. He also wanted to find someone to have deep conversations and he has plenty of time now he crashed out of Stage 2.

Joe Moravsky went next. The show has been with him for a long time and ANW was even there back before he had kids. So, that explains why the show has footage of him with abs. Joe said he lost all of that when he had kids and developed a dad bod. He lost his muscle in certain places while gaining it in new ones. Joe dedicated his run tonight to the dad bods all over the world and then he did them proud when he became the next finisher of the night. And he set a new record for finishers at Stage 2.

Joe was off kissing his kids while Tyler Smith was having his run. The Ninja Bug Man was an exterminator out in Iowa and he tries to juggle the job with his family life as well as ninja training. It wasn’t easy, but he made his sacrifices to get to this point. Tyler’s run started out strong and it quickly became one of the fastest to date. He finished with the fastest time on the clock and only then did he officially join the ranks of the elite ninjas.

Eventually, the reruns for the Safety Pass came up. Karson Voiles had a much better run the second time around and he became a finisher in the end. Dave Cavanagh, on the other hand, had fallen again on his redo. That was it for him and it truly did come as a shock to the crowd. No one was expecting it. They all thought that he would learn from his mistakes and it seems everyone was wrong because he committed to the same error as before.

Josh Salinas went next. He got married earlier this year and so this was the first time his significant other was there as his wife. She was there tonight and, while Chelsea was there supporting him, Josh went on to become the next finisher with the fastest time. He beat out the Bug Man with by one full second.

Meanwhile, there were four original ninjas. These ninjas have been around since Season 1 and for that, they were called the OG(s). There weren’t many this season because two of them crashed out at the National Finals, but Ryan Stratis made it through and hit a buzzer over the commercial break. Lorin Ball went next and he fell with only two obstacles to go. And so there went the last of the OG(s).

The Kid has his come back next. He had his second chance at the course and yet something was different. He wasn’t tackling the course as he did before. The Kid became more cautious and in slowing down he exhausted himself. The Kid was so tired that he struggled through the Wonder Walls. He was thankfully able to get through it in the end (barely) and he became the next finisher of the night.

Then there was Drew Drechsel. He dedicated his all to this sport and most people how much sweat and blood he’s poured into it. Like Drew changed up his sleeping patterns in order to get better. He practiced on a twenty-four obstacle course that he built up himself and ran it several times a day every day. So, he was ready tonight. He was cautious with his run and took serval gambles along the way. And, ultimately, he became a finisher.

Now, the last ninja to run was Daniel Gil. He was another legend on the course and the Kingdom Ninja ran through this course with his ever-present smile. He smiled all the way to the buzzer, where he became the fastest ninja of a record-breaking night.