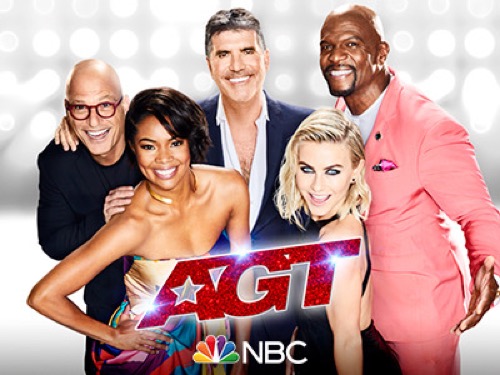 Tonight on NBC America’s Got Talent begins with an all-new Tuesday, September 17, 2019, episode and we have your America’s Got Talent recap below! On tonight’s AGT season 14 episode 22 “Live Finals″, as per the NBC synopsis, “The top 10 acts perform one last time, live from The Dolby Theatre, for their chance to win one million dollars and be named the most talented act in America.”

On tonight’s season finale of Americas Got talent the final top ten acts battle for the one million dollar prize. Judges Howie Mandel,Gabrile Union, Juliane Hough, and Simon Cowell the task of judging. Host Terry Crews does a recap of this seasons highlighting the craziest, wackiest and dangerous auditions. The first act is Indian native dance group V. unbeatable whose “V” is dedicated to a fallen group member.

They perform acrobatics spinning and dancing in a fast-paced routine. It’s packed with dangerous tosses of members across the stage and they def have the audience’s attention with the bright colors and daring leaps and jumps and precise steps without any fumbles. All the judges loved the performance and are pumped up about it. Next up is the Detroit Youth Choir comprised of young inner-city kids, they perform Macklemore song “Can’t Hold Us”, they mix it up with coordinated dance stepping and rapping, they give the song a gospel spin, judges Gabrielle and Simon congratulate them for a job well done

Next up is 11-year-old opera singer Emanne Beasha, who received the golden buzzer during her past performance. Her voice sounds angelic and definitely of a more mature tone for her age it’s surprising to see such a strong and controlled voice from a young child and that captivates the audience and blows the judges away.

Next comedian Ryan Niemiller who’s given 90 seconds to make the audience and judges laugh he tells jokes about being recognized from TV on the street and he also jokes about him being handicapped in both arms, from people being nervous to shake his hands or avoiding him. His jokes are subtle and makes the audience chuckle, judge Simon feels he should be on the big screen in a “Hangover” type movie they all feel he is a star, Gabrielle Union loves his act so much she offers him a role in an upcoming movie she’s producing.

Next four singers called Voices of Service comprised of three men and one woman the group starts off by reading letters from soldiers and veterans suffering from PTSD, the song they sing is an uplifting and soulful song of support and courage meant to be uplifting. The judges say their performance was inspiring.

Performing next is group Light Balance Kids, their act is dancing in the dark with colorful reflective light suits on, it’s most certainly fun, creative and fun as their stage background is a diner and each taking on a good group and doing creative dance steps full of energy and precise. All the judges agreed and said it was their best performance to date.

Performing next is going singer Benicio Bryant his solo performance lacks dancing or any play of instruments he def has vocal range but lacked stage presence judge Howie Mendel feels the same but regardless of this the other judges loved the simplicity of the act.

Moving on to the next act is 11yr old violin player cancer survivor Tyler- Butler Figueroa. He plays Destiny Child’s song “Survivor” which Simon revealed was personally cleared by singer Beyonce and the song captures his emotions and It displays his overcoming battle and win with cancer, and all the judges think he played his best routine tonight.

Up next visually impaired singer and pianist Kodi Lee, he sings a mellow love song as he plays the piano as his prop on stage, he wows the audience and judges as the predict him to be the winner tonight.

The final act is the NDLOVE youth choir from Africa, the perform in vibrant bright attire, singing in their native language their voices are sync along with their choreography. It’s powerful routine and u can fee there presence on stage, all the judges agree it was a moving piece. The voting continues as a winner will be revealed tomorrow.