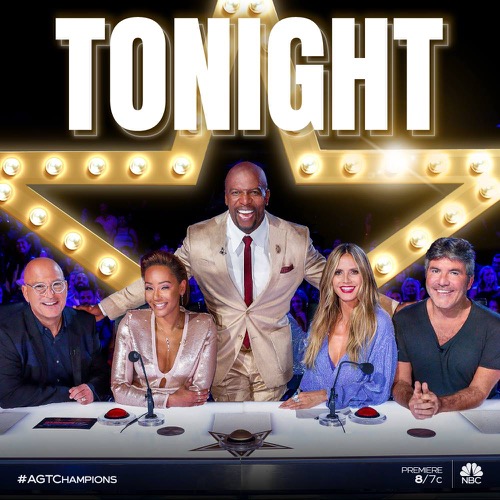 Tonight on NBC America’s Got Talent begins with an all-new Monday, January 7, 2019, episode and we have your America’s Got Talent recap below! On tonight’s AGT season 14 episode 1 “The Champions One″, as per the NBC synopsis, “In the premiere, 10 memorable acts from “AGT” and “Got Talent” competitions around the globe will perform for judges Simon Cowell, Mel B, Heidi Klum, and Howie Mandel. Two of these renowned acts will move on to the finals—one will receive a Golden Buzzer, and one will be voted through by a panel of “AGT” Superfans.”

Over the next 7 weeks, the greatest talent of America’s Got Talent will fight to become number 1. As Simon shares, it is the Olympics of AGT. Terry Crews takes the stage as host. Tonight 10 acts will perform with 2 going ahead to the finals. Terry welcomes the judges: Simon Cowell, Heidi Klum, Mel B., And Howie Mandell. Mel will have the golden buzzer tonight to send an act right to the finals.

Backstage, Terry says hello to Bianca Ryan who has returned to compete after performing on the show when she was younger. Following her win, she lost her voice due to vocal chord paralyzation. Since she has had surgery and is back to win. She takes the stage. Following her performance, the crowd goes wild. Simon is thrilled she is back. Howie thinks she is a champion after getting past all of her barriers. Mel thinks she was amazing. Heidi that is was also amazing.

The Clairvoyants are back after working for the last two years to up their game. They take the stage and welcome the judges on stage too. They are going to get into their love lives. The judges look scared. They have Simon pick a city for his dream date without telling anyone. Heidi must also take something from their table of trinkets of travel and not tell them what it is. Howie writes his answers while Mel will care for a box they give her. The Clairvoyants guess all of the judge’s choices correctly. The judges freak out.

Hero and his owner Sara are back. Simon is thrilled to see them. Simon originally talked the judges into keeping her on in a previous competition but she did end up going home. Now they are back and ready. They perform their routine. The crowd goes wild! Mel thought it was great. Howie loved it too. Simon hopes to see her in the final.

Uzeyer from season 10 has returned to try and win. He had performed a trick where he fell off a very high ladder during his act and left on a stretcher. Howie recalls the scary scene. Uzeyer is back to perform the same act. Howie is beside himself. Uzeyer performs his high climbing acts on several very tall and wobbly ladders. Simon thinks he has the ball. They are all impressed. The crowd goes wild.

Vicki Barbolak the stand-up comedian from Florida is back. She is thrilled to have this shot even if she is nervous to be up against Preacher Lawson. She takes the stage. Simon and the others are thrilled to see her. After her act, the crowd stands with applause. Heidi wishes she could be on stage longer. Howie thinks she has a good shot. Simon loves this new Vicki. She has more confidence this time around.

Alex from Moldova has returned. His talent is sword swallowing. He is the winner of Russia’s AGT. He is back to show the world his craft. This is his destiny. He takes the stage. Tonight he will be performing something a bit new. He swallows his first sword and has Simon take it out. On his second swallow, he performs a stunt, jumping and spinning in the air. For his third trick, he swallows a sword that pulls him into the air. For his last trick, he swallows a larger sword and then hangs upside down before flying to the ground, making an abrupt stop. The crowd screams and cringes in their seats. Heidi found it hard to watch but he is hot. Mel thinks he is crazy. Simon loved it.

After winning Australia’s Got Talent, the dance group Justice Crew is here to try and win over the U.S. They take the stage. The crowd goes crazy for their dance moves, singing, bright lights, and fireworks. Simon smiles wide. They get the crowd going who begin dancing in their seats.

Susan Boyle returns after becoming runner-up in BGT back in 2009. Simon is thrilled to see her. Dressed in a navy blue sequenced dress, she takes the stage and sings “Wild Horses” to the piano. Everyone stands to applaud wildly. She smiles wide as Simon tells her she is the contestant that defines this show. Howie agrees. Mel is honored to have listened to her sing. She gives her the golden buzzer. Simon heads up to hug Susan.

Sofie Dossi, a contortionist, has returned in the hopes of winning this time after making it all the way to the finals. She performs to screaming fans. Mel loved her act. Heidi commends her for her performance, especially at her age. Simon thinks she is incredible.

Preacher Lawson takes the stage. He is back and better than before. He has paid his mom back for crashing her car and has some money now after being so broke. Thanks to AGT and the tour, he is in a better position. The preacher gives his skit. The crowd is dying with laughter. Mel would have given him her golden buzzer. Heidi agrees he is great! Howie thinks he is a champ. Simon thinks he has gotten even better.

With Susan Boyle on to the finals, there is just one spot left to the finals. All nine acts take the stage. The Top 3 acts are Bianca Ryan, Preacher Lawson, and Sofie Dossi. All 3 step forward. The rest will head home for now. Now it is down to the one person who will go to the finals….Preacher Lawson has won! Susan takes the stage again to say goodbye to the crowd. Simon thinks these two deserve to move on.