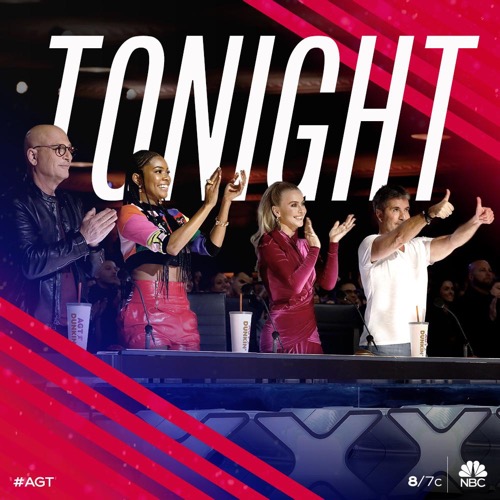 Tonight on NBC America’s Got Talent begins with an all-new Tuesday, June 11, 2019, episode and we have your America’s Got Talent recap below! On tonight’s AGT season 14 episode 3 “Auditions 3,” as per the NBC synopsis, “The auditions continue with creator and executive producer Simon Cowell at the judge’s table alongside Gabrielle Union, Julianne Hough, Howie Mandel host Terry Crews. Variety acts of all types and contestants of all ages audition for the chance to win the $1 million prize. The Golden Buzzer is still in play and three more lucky acts have the chance to go directly to the live shows”

Marina is originally from Ukraine. She moved to Los Angeles to live out her dream of becoming a well-known dancer and at first people thought it was in ballet because of her outfit, but she took everyone by surprise. Marina was a contortionist, dancer, and even a comedian. She had everyone in stitches with the way she could change from one thing into the other. Marina also left Simon speechless. He was still seated with his eyes wide in almost fear and the rest of the judges were standing because they were giving her a standing ovation. They all loved her and by the time they got around to Simon, he still had the same look on his face. He was someone that’s seen the Director’s Cut of “The Exorcist” and he said Marina was actually scarier.

Marina got her yesses from the judges and Dom was hoping he’d be just as lucky. Dom was a magician. He picked it up when he was a kid and that was thanks to his grandad. His grandfather had wanted to connect to his grandkids and he thought magic was the best answer. It was something they could all enjoy together and it helps Dom to remember his grandfather. Sadly, the man passed away when Dom was working and that just made him want to be even more of a success. He’ had shown all over the place because he believes beggars can’t be choosers and he was once hired for a funeral. Dom has paid his dues and he showed the judges that he was ready. He pulled off some humorous magic tricks and the only gripe was when he drank beer out of a shoe.

Then again, Howie was a huge germaphobe and so he was never going to be down with the shoe drinking thing. The judges managed to overcome their ick factor to give Dom four yesses and so he too was heading closer and closer to the live shows. Someone that should be joining him there was Carmen Carter. She was a backup singer in her fifties and she had the chance to be the star, but the record company had thought she was too fat and so she was written off before she could ever get a fair chance. Carmen sang “Never Tear Us Apart” tonight and she had been amazing. It was just what everyone heard from the start and so, of course, she was a star in the making. The judges gave her four yesses and it did seem like they were on a good streak with this current batch of talent.

There were a group of very talented children that were so on point that the judges couldn’t help loving them and they had been given four yesses, but there was also a duo that showed age is but a number. Their names were Edson and Leon and one was fifty-four while the other was eighty-four. Both of them have a dream of performing onstage and so they teamed up. They met fourteen years ago and were practically daredevils now. They showed off feats of strength that frankly no one thought they were capable of and so they were the reason a show like this was created. There were so many talented out there that hasn’t been the chance to shine and this show gave them a platform. The guys received all four yesses and then it was onto the next one.

Unfortunately, Sethward came back. He tried out last season with his “caterpillar act” that even the audience booed and since then he claimed to have reflected over his act. He went back home and he started thinking about how he could improve. Some would find new talent and others like Sethward would come back with stupidity. Sethward came dressed as a giraffe and had to be dragged off the stage when he fell and couldn’t get back up. The audience also got to see that he wasn’t wearing anything under it and so Terri told him that maybe he should look into other things. Sethward took that advice and then came back as a walrus. It was again stupid and the only difference this time was that Howie and Simon saw the humor in it.

The guys had wanted to reward him and so it had been up to the ladies however they didn’t see that much of a difference. They again hated the act and both told him “no”. Sethward was rejected for the third time and yet there was a feeling in the air that just said he will be back. Until then, the show introduced Charlotte Summers. She was from Spain and was barely a teenager at thirteen. Charlotte was excited and was a huge fan of Simon. She told him as much when she met him. She said she’d buy a guinea pig and name it after him. So naturally, she won him over before the first note. And luckily she was also an incredible singer because she did amazing things with the song and so truly deserved all four yesses from the judges.

Plus, it had been great to see someone with Charlotte’s showmanship. The next batch of contestants all came down with a case of the nerves and Kevin Schwartz wasn’t any different. He was practically shaking when he came out and apparently he’s a comedian. He grew up with severe anxiety and it had been his therapist that suggested he try out new things. Kevin came across a comedy club one day and he came to love it. He was also an incredible comedian. He was funny and he had these one-liners that tended to wow people over. It didn’t necessarily mean his nerves left him and they didn’t. He was nervous the whole time and that never once stopped him or derail him from receiving all four yesses from the judges.

The judges went into a musical pit afterward in which they couldn’t seem to find the right singer for anything, but then came McKenzie. Here was a young man that didn’t think about college until he found out he could study music. He went to school and he loved it there. Then he was forced to drop out because he could no longer afford it and so that caused depression. McKenzie credits his wife for helping him get back up on his feet and it was her honor that he sang “Nothing Compares To U”. He made sure to count it as Prince’s song because that is who wrote it and he delivered this song justice. It was like waiting for him and it had been beautiful. It was also really sweet because everyone could tell he was singing to his wife and so they called her up on stage, where she got to hear the good news. Her husband just received four yesses from the judges.

Yurian Retriever went next. She flew in from Japan and she came out onstage barefoot. No one knew what to expect from her and it wasn’t until she stripped down to a bathing suit that people realized she was more comedy than dance. She wasn’t a dancer and so judging her based on the dancing would always have resulted in a no, but she was funny and maybe next year she’ll come back as the comedienne that she is. Now, the next contestant was a bit more mysterious. Michael Paul traveled to the show with a cage that was covered up. No one ever got to see what was under the sheet until Michael wet onstage and showed his exotic bird was, in fact, a puppet. And he himself was actually a ventriloquist.

Not only was he a ventriloquist, but he was a funny ventriloquist as well and his act was so good that everyone enjoyed it. Like he literally made his “bird” poop onstage. It was humorous and so the judges didn’t have a choice. They all gave him yesses because saying no wasn’t an option. Also, everyone had been pleased to see their first ventriloquist act of the night because usually there’s a lot more of them around. Even the next contestant wasn’t one. Tyler was instead an eleven year old who survived cancer and being bullied for cancer. Some of the other kids thought cancer could be contagious and so they spread nasty rumors about him. And while those kids were horrible little brats, Tyler turned his pain into his power.

Tyler had wanted to be the boy who plays the violin rather than the boy who had cancer and so he learned to play the instrument. He was now cancer free and he could off how he was a bright, loving, and talented child. Tyler was amazing on his violin and everyone’s hearts went out to him. In fact, Simon had one last message to the bullies. He showed them that was Tyler the one who received the Gold Buzzer!