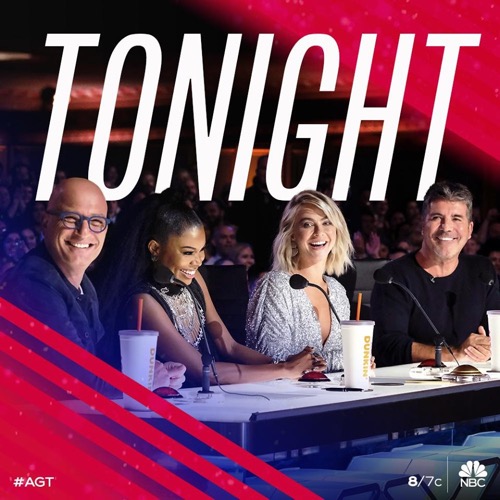 Tonight on NBC America’s Got Talent begins with an all-new Tuesday, June 25, 2019, episode and we have your America’s Got Talent recap below! On tonight’s AGT season 14 episode 5 “Auditions 5″, as per the NBC synopsis, “The auditions continue with creator and executive producer Simon Cowell at the judge’s table alongside Gabrielle Union, Julianne Hough, Howie Mandel and host Terry Crews.

Variety acts of all types and contestants of all ages audition for the chance to win the $1 million prize. The Golden Buzzer is still in play and could send one lucky act directly to the live shows at the Dolby Theatre in Los Angeles to compete for America’s vote.”

With their own parade leading the way, week five of audition kicked off with a bang!

The first act up were a married couple. Nick and Lindsay Williams were from New York and they also perform together. This couple set themselves up as Lindsay being the violinist and her husband accompanying her as an opera singer, but that had been a ploy. It wasn’t a very good one because Simon pressed reject before they got into their real act and so the real one was actually a lot better. It turns out Lindsay’s real talent was that of a knife thrower and she could even throw knives on fire with her feet. Lindsay was really good and so was her husband. He was an actual opera singer and he was performing as his wife was throwing knives at him. And so the two of them quickly won over the judges.

The couple received a “yes” from everyone but Simon. Simon said he had to say no because the singing wasn’t very good and that’s the part he remembers. He also told Lindsay that he was willing to change his mind if she could throw a knife at him with her feet and so she did. She took the opportunity and she didn’t kill them like everyone thought she would. Although she did sort of flash him. Lindsay wore a dress because she thought she was only going to throw at her husband and that’s how the whole “flashing” part came in. Other than these two were amazing and they got the show off to a great start. The judges next saw from a couple of kids. There was one child that brought chicken and she was rejected because her act didn’t seem like it was worth a million dollars.

Only there was also these two kids that danced together and they were a rarity. They were a Contemporary duo. The show doesn’t see typically see that form of dance and so it was good to see the next generation become interested in it. Lizzie and Easton were great friends as well and so they danced beautifully together. Simon didn’t think he would like it because it was Contemporary and so the kids changed his mind. He along with his fellow judges gave Lizzie and Easton four yesses because they all enjoyed it! So who knows, maybe they’ll be more Contemporary dancers in the future. Simon’s mind tends to stay in one place and so it’s a rarity to see him someone or something another chance yet he tried to do that for Lamont Landers and the young man almost spat on the opportunity.

Lamont was a singer. He was in Simon’s field when he came on the show and this what they both do professionally. Lamont makes his living as a singer, but he hasn’t made it big yet and so he chose a safe song. He chose a relaxed oldie and Simon stopped it. Simon asked him if he had anything else in his repertoire and he had another song that was exactly like his first. Which wasn’t what Simon was asking for. Simon felt the song was too safe and he wanted Lamont to take a risk. He is even willing to give Lamont the chance to come back later in the night with a different song and instead he got cocky. He said his other song was great and that the audience agrees with him. And they did, right up until his attitude began turning them off just as much as it was doing to Simon.

Lamont left the stage and he had to think about whether or not he was coming back. He said that he wasn’t sure if he would and that statement alone made him unworthy of coming back, but a good think on it helped change his mind. Lamont realizes he needed to learn a different song and so he chose “Dancing On My Own”. It was a little more contemporary than what he was choosing before and it pushes him into stepping out of the box. Lamont learned this song within a couple of hours, and he came back which was the important part. He was also much better the second time around and being humbled suited him. And so the judges chose to judge just his last performance and they gave him a “yes” because he was willing to acknowledge that he was in the wrong.

Lamont was also a high point when there was an act named Death next. Death was 2.4 billion years old and he has a dog named Gordon. He was a comedian and not a very good one. Death bombed from the start. It was funnier watching him bomb than it was listening to him and so the judges gave a “no”. They weren’t fans but leave it to Simon to get on Death’s reading list. Thankfully, the Ndlovu Youth Choir from South Choir helped cleanse the palate. The choir was from South Africa and it consisted of young men and women who come from poverty and have learned that they could overcome anything with the power of their voices. Their spirits alone put a smile on everyone’s face and so the crowd knew they were special.

The judges loved the choir and they gave them four yesses as well as a standing ovation, but then came a new day and with it new acts. Like Siomne and Lorenzo! They were from Italy and them psychologists. They created a virtual experience to help people overcome their phobias and they refer to it as helping someone find their own talent. Well, they got lucky with AGT because there was no bigger germaphobe than Howie. Howie was invited onstage. He was given the headgear to enter him into the virtual reality and he was on a cliff over a canyon. He also saw that someone needed to be rescued and so he had to “walk” the tightrope in order to save this person. And then he had to grab their hands despite his phobia, and surprisingly he was able to do it and he came to love the machine. He believed it would help those affected by mental illness and so he kicked off the yesses from the judges. And now the psychologists were going to the next round.

Then there was the child opera singer. Emanne was all often and she was cute, but still, no one expected her voice to be as it was and so she was the nice surprise of the night. She has an amazing voice and she blew everyone away. The judges couldn’t believe such a voice came from such a tiny girl and so, of course, they said yes. They couldn’t wait to see what else she has in store for them. Emanne had ben a rare find and unfortunately, not everyone was going to get a yes. There were plenty of others that didn’t make it because they weren’t as good or unique. The judges turned down several singers and then they came across a dog act from out of nowhere. Falco the dog and his owner Lukas did a dance routine and it was cute. The judges enjoyed the cute factor and they gave Falco yesses.

Up next was Verba Shadow Group. They were a shadow dance group from Ukraine and they danced a story detailing a young couple falling in love. There were war and children. It really was a whole story that just captured everything and so the judges loved it. They gave the group four yesses and who knows what other stories they’ll be able to tell now. After the dance group, it was Ben Trigger’s turn and he was a dancer from Australia. He wasn’t slim like other dancers tend to be and he admitted in his backstory that he was always big. His ballet teacher used to call him tubby rather than his real name and he never gave up. Ben came to dance and he even gave a striptease at the end, but he also climbed on the judges’ table and accidentally gave himself the Golden Buzzer. And that’s okay because the judges loved him and they gave him four yesses anyways.

Only Julianne was keeping her Golden Buzzer, though. She was the last person that had it and she wanted to hold on for someone truly unique.