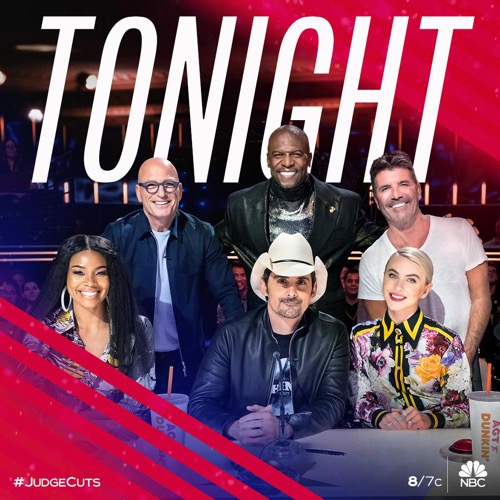 Tonight on NBC America’s Got Talent begins with an all-new Tuesday, July 16, 2019, episode and we have your America’s Got Talent recap below! On tonight’s AGT season 14 episode 6 “Judge Cuts 1″, as per the NBC synopsis, “Country music superstar Brad Paisley joins the panel as a guest judge and gets to send an act directly to the live shows with a Golden Buzzer; contestants have one last chance to impress the judges before America votes in the live rounds.”

Tonight’s special guest has three Grammys and fourteen Academy of Country Music Words, Braid Paisley joins as guest judge. Just like a regular judge, Brad gets a Golden Buzzer which will send one-act straight to the live shows. Brad says, “ “I want to see a person that has a gift to give humanity. They’re going to walk out here and it will be a moment where we needed it and we didn’t even know it.”

The first act up tonight is Lukas & Falco, a 23-year-old and his dog. The two will be doing a skit on “The Greatest Showman.” Brad: “That was great, I don’t know what you are paying Falco, but he deserves more.” Howie: “It seemed you did more tricks than Lukas.” Gabriel: “I think you got a lot better from the first audition.” Julianne: “You have something really special and deserve to be on stage.” Simon: “I loved this, you could not have done more to make me love this act.”

Andy Rowell is a karaoke singer. He totally bombs, it is awkward and Brad says, “I don’t really know what to say good luck.”

Jecko is a comedian who starts by doing balloon tricks. This guy is ridiculous, Simon tells him that he was annoying, a gives him an X.

The Orange Magician is next and all he can say is, “it’s good.” His act is changing clothes behind a screen, he is quick and funny, but not worth a million dollars. Simon: “You are good but you are annoying when you talk.” Brad: “I got the deeper meaning, he really enjoyed it and thinks his little kids would love it.” Howie: “You are a quick-change artist, a mime, not sure if it is enough to get to the live shows.”

Berywarm are from France and they are bringing the night club to the stage. All the judges are standing except for Simon. Howie: “I just want to point out to people at home that are watching this that this is not a track, they are the ones doing it. Not sure though if it was enough to get you through.” Brad: “This is something we haven’t seen before, it’s hard, you are busting it down, it was great.” Simon: “It missed an incredible opening and middle, I don’t think it would go viral.” Gabriel: “I absolutely disagree, it was great.”

Dylan is 10 years old and he is a rapper. He tells everyone to stand up. Howie: “I learn so much from someone who is 10.” Brad: “I wasn’t that good when I was 10.” Dylan tells Brad that he did well since he won three Grammys.

Emerald Belles look like the Rockettes but where they kick to eye level, the Belles Sisters kick to their foreheads. Howie wasn’t impressed with them last time, can they do better? Brad stands up. Simon: “Somebody is in it to win it.” Julianne: “You came out here and were really tight but there was a real high school element. You have to up your game.” Gabrielle: “I think you were better than the first audition.” Howie: “I don’t think it was enough to win AGT, and I don’t think it was enough to move on to the next level.” Brad: “I can’t believe you are all from the same school. You were amazing and perfect, and Howie can suck it.” Simon: “I think you are all ready to move on, it was a great audition. I believe you deserve one of those seven places.”

The Sentimentalists are another act that Howie was not impressed with. They start by producing a box of colored marbles, each judge chooses one. They are told to think about the color of their marbles. Brad’s color is guessed, he is asked to go on stage and bring his phone. Brad shows a picture of something special to him, and again it is guessed. There is a box on the stage, Terry brings the key, inside there is a smaller box, inside there is note that has all the answers written on it. Julianne: “My mind is blown.” Brad: “There was no way you would have known about my yellow guitar.” Howie: “I love mentalists, I love what you do but it still wasn’t enough for me.” Julianne: “I loved it.” Gabriel: “I will be rooting for you.”

Duo Togni is a high flying acrobatic act, another act that Howie was not impressed with. The woman tells Howie that she would like to hold him with her teeth. She does it and he begs to be put down and tells her to spit him out. Howie: “If you promise never to lift me in your teeth again I will fight for you.” Brad: “I won’t say anything bad, amazing, I am floored.” Simon: “Amazing, thank you.”

Sophie Pecora will be doing an original song for the judges. The audience loves her, she gets a standing ovation. Gabriel: “There is nothing like an artist that knows themselves, you just reached into our hearts.” Simon: “I think the song should have ended with – I don’t think about you anymore. It just needs to be positive at the end.” Brad: “I loved it. I know you from that one song. It is pretty incredible that you stood up there with just a guitar. You have schooled so many people at this moment. I think.” Brad hits the golden buzzer.

Dakota & Nadia are contemporary dancers who didn’t impress the judges.

Kevin Schwartz is a comedian, Simon doesn’t think his act is ready for Vegas but he likes him a lot.

Loki Alohikea is a singer. Howie says he is good, but not good enough for Vegas.

Matthew Richardson is an acrobatic performer. He is performing a piece that he prepared for his dad who he lost to pancreatic cancer. The judges loved it. Brad: “It was inspiring.” Gabriel: “I can’t wait to buy a ticket to your show in Vegas.” Simon: “It was very special, I believe you could headline a show in Vegas.”

Damiyr is from New York, he sings in the subways. Brad: “That was brilliant.” Simon: “I have never seen anyone sing that song with that passion, you have a real shot here.”

Chris Klafford is from Sweden, he singing an original song. A standing ovation from the judges and the audience. Chris is overwhelmed and crying. Brad: “It is truly inspiring to hear you sing, you are something else. That is original talent.” Howie: “You stepped it up, you took a gamble and it paid off.” Julianne: “You are not a mold, stay who you are.” Simon: “I was not that excited about your last performance. Tonight’s song let us learn more about you. You made our job harder tonight because it was that good. I really liked the song.”

Messoudi Brothers are acrobats, and the strength from these guys is incredible. Another standing ovation. The brothers invite their dad on the stage, he is the reason why they do what they do. Dad takes off his shirt, along with his sons and joins them for another performance. The father holds all three sons by balancing on his knees. Wow! Gabriel: “Are you kidding me. This is unbelievable, you incorporated dad and upped your game by a thousand percent.” Brad: “I have two sons and couldn’t do that when they were two and four.” Simon: “What you shared with us made me love you even more.” Howie: “You just made our job a lot harder, you are certainly deserving to put forward.”

Ndlovu Youth Choir from South Africa. Another standing ovation. Juliane: “We don’t see choirs like you, beautiful.” Brad: “I always thought that art and music are the greatest ambassadors, you are a beautiful thing.” Gabriel: “Pure magic.” Simon: “I always love seeing you guys perform. I think people want you to do well, but this is not going to be a walk in the park this time. Well done.”