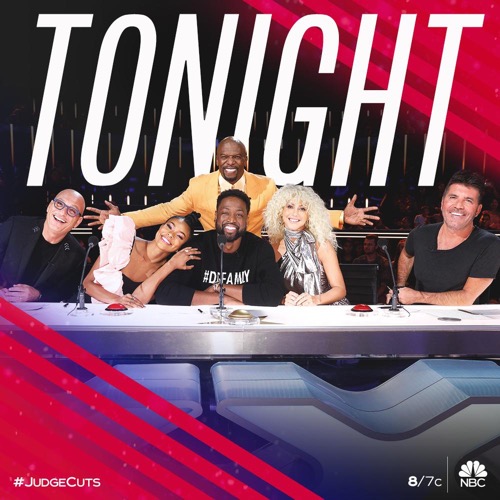 Tonight on NBC America’s Got Talent begins with an all-new Tuesday, July 23, 2019, episode and we have your America’s Got Talent recap below! On tonight’s AGT season 14 episode 7 “Judge Cuts 2″, as per the NBC synopsis, “Jay Leno joins the panel as a guest judge and gets the opportunity to send an act to the live shows with a Golden Buzzer; contestants have one last chance to impress the judges before going live for America’s vote.”

Judge Gabrielle brought her husband, NBA all-star Dwayne Wade as a guest judge and he gets a golden buzzer tonight.

Bir Khalsa is a group of three men from India who do dangerous acts. The first, one man balances by his stomach on a sharped edged sword. Next, they place a large block of ice on another man and it hit with a hammer, then when the ice is gone, they hit him on the chest. Lastly, they place coconuts on another man’s head and hit them with a hammer.

Judges Comments: Simon: “You just turned up the heat.” Dwayne: “It is entertaining and unique. We went on an emotional rollercoaster. Can we travel together.” Gabrielle: “It was great in a freaky kind of way.” Julianne: “I don’t trust that you are not going to eventually get hurt.” Howie: “What is this? What are you?” Simon: “You have amazing personalities you three.”

GForce is an all-girl group singing, “Simon Says,” while they dance around and rock the stage.

Judges Comments: Gabriele: “The reason I wanted to be a judge is for this moment. I loved when you said you are your own bosses.” Dwayne: “You guys are incredible, whatever you are selling I am buying.” Howie: “You are incredible but I only heard Simon Says and Jump.” Simon: “I have a real hate for groups who are told what to do. Having said that, I think this is a way better audition than the first one.”

Olivia Calderon is singing in Spanish.

Judges Comments: Julianne: “You are meant to be on this stage.” Dwayne: “You have an amazing voice but it is not my thing.”

Dom Chambers is a magician that used beer for his first audition. Time for a cocktail and Julianne gets to decide which one, he gives her a list. He uses Siri as his assistant.

Judges Comments: Dwayne: “This was the best magic I have ever seen. Incredible, thank you for showing us something different.” Gabrielle: “I have no idea how you did that.” Simon: “Have you stepped up? It wasn’t as dynamic as the first audition.”

Mat Ricardo is a dangerous act, and he is really dangerous. He accidentally cuts his arm but doesn’t.

Judges Comments: Howie: “What I love about you is that you take a gamble and it paid off.”

Lamont Landers is a singer who survived Simon’s criticism last time, he told him he was cocky. Tonight he is looking to do something different.

Judges Comments: Julianne: “Your voice is so special and unique but it is not filling the space like I think it should.” Gabrielle: “Last time you gave us cockier and tonight you gave us more layers, I appreciate that.” Dwayne: “I believe you can give more you have an amazing voice.” Simon: “I am going to ge honest, I like your voice but it left me with nothing.” Gabrielle: “I think you have a lot of fans on this panel”

Adaline Bates performs as a man and a woman.

Julianne: “I loved your first audition but I don’t know how you can carry a whole Vegas show.” Howie: “Good luck tonight.”

Michael Paul is a ventriloquist and he is with Nadia, the oldest gymnast. Simon hits the buzzer and says it was not as good as the first audition.

Ginzilla is a drag queen that won the audience over in the first round. This time Howie says he is flat and not a step up.

Alex Dowis blew all the judges away in the first audition, except for Simon. He is a blacklight painter.

Judges Comments: Howie: “This is a story of exactly what this show is, chasing a dream and conquering it.” Dwayne: “You took to a place it was filled with deep emotion.” Simon: “The reason I critisized you the first time, I thought you would be better the second time and I was right. I felt goosebumps on my goosebumps, it was the best act today.”

V.Unbeatable is a group of dancers from India.

Judges Comments: Julianne: “Wow, wow, wow. I mean it was so much power. Some people are just dance crews, some are just acrobats, you are both.” Simon: “We have the best job in the world, these are times when we need each other.” Dwayne: “My heart is beating in a rapid pace that I haven’t felt before. I know the practice time it takes, the time it takes. This is your house today.” Dwayne hits the golden buzzer.

ADEM Crew is a hip hop dabce crew that do a play on Night of the Museum. Simon says it was incredible and a step up.

Verba Shadowis a shadow dancing group from Ukraine and will be something new that they have never done before.

Judges Comments: Howie: “I love what you do but I didn’t get the story.” Simon: “It was good versus evil. I didn’t understand why the horse came out of nowhere.” Julianne: “It was a unicorn.” Dwayne: “That was the greatest 3D movie, I appreciated the journey.” Gabrielle: “I look forward to the sequel.”

Robert Finley is a 65 year old blind Vietnam veteran who is singing an original song.

Judges Comments: Howie: “You moved us off our seats and you are authentic.” Gabrielle: “You came to go the finals, you put everyone on notice.” Dwayne: “Can we adopt you? Thank you for showing us not to give up on our dreams.” Simon: “I once left this show because people over 29 could not audition. I wish I could be as cool as you.”

Duo Fusion are a husband and wife team from Orlando, Florida. They are a balance act with a lot of strength.

Judges Comments: Gabrielle: “Just so know when we get home we are trying everything at home.” Julianne: “I have never seen anything like that before.”

Ryan Niemiller is a comedian born without his hands.

Judges Comments: Dwayne: “You are one of a kind, I could listen to you all day.” Simon: “From the moment you walked up, it looked like you were having the time of your life.”

The judges have made their final decisions: