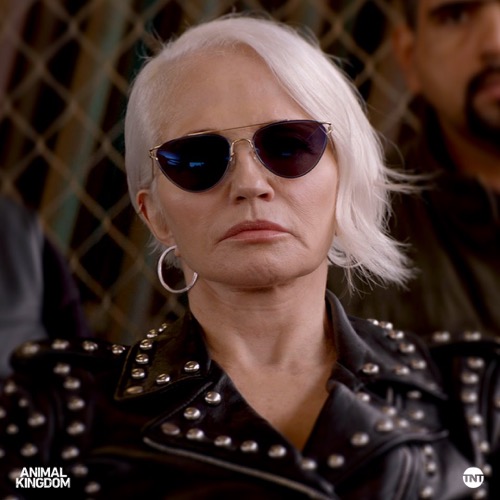 Tonight on TNT Animal Kingdom returns with an all-new back to back Tuesday, June 11, 2019 season 4 premiere episode 3 Animal Kingdom recap called, “Man Vs. Rock.” On tonight’s Animal Kingdom season 4 episode 3 as per the TNT synopsis, “Craig feels the pressure of pulling off Frankie’s increasingly complicated job; J grows frustrated with Mia; Deran tries to get Pope out of the house; Smurf decides she needs answers.”

Renn and the guys sit around the pool partying. She eats a pot brownie. They warn her they are potent. She can handle it, she tells them. Meanwhile, Smurf is at the doctors for a pet scan while Deran, Craig, and Frankie check out their latest job. Frankie wants to steal a very expensive art piece. Deran thinks this is all too crazy. J is on board if they decide its a go. J meets with a firm he hopes can help him hide money. The representative isn’t interested in what he wants to do.

Angela and Pope are having breakfast. Angela has a lot of questions about Smurf and J. Smurf’s scan is over. She asks the technician what she sees on the scan but the woman refuses to share information, telling her the doctor will call her.

Jake and Renn have words by the pool. She tells him not to worry about her she can handle herself. He tells her she isn’t a hero and she belongs to someone now.

Mia is out for lunch with her boyfriend. Their mutual friend just got out of prison. She acts like he isn’t a big deal to her but when her boyfriend goes to the bathroom, their friend leans over and asks her if she missed him.

Deran, Craig, and Frankie are at the bar trying to figure out how to get the art piece out of its location. She suggests Pope but they tell her he is out of this one. Frankie leaves. Craig wants Pope in but Deran thinks he will scare away people. He tried to kill himself. Maybe he can help clean up the bar since the Board of Health gave it a B. Deran isn’t having it.

J picks up Mia. He is annoyed she didn’t meet with the plumbers. He tells her she needs to be where he tells her to be. She agrees. Meanwhile, Deran visits Pope to ask him for help with the bar.

Pope thinks this is all about charity but Deran tells him it isn’t. J pulls up to the side of a house where Mia says her car is. She tells him to keep the car running. She crosses the street and kills the friend who just got out of prison, shooting him in the chest and head. J freaks and they head to a parking lot where he decides he needs to get rid of his truck. What if someone saw them. She tells him she isn’t his b*tch. They need to work together.

Pope is grossed out and banging things around in the kitchen. He just found a mouse in the fryer. Meanwhile, Smurf buys a fish from a fisherman at the pier only to watch it die on the ground. The fisherman is confused.

Janine drives down the road periodically taking her hands off the wheel for 4 seconds to the fun. She smashes the car she borrowed into a rock.

J comes home to find Angela. She tells him Smurf is letting her stay. She hugs him, telling him whatever he is working here she isn’t going to screw it up.

Deran talks to his boyfriend about the job and Craig being stupid. Stupid over Frankie. Smurf arrives home. J needs to talk. She cuts him off – he is going to bed. J sees Pope on his way out of the house. They talk about Angela. J is mad. Why are they letting Angela stay? Pope didn’t do anything for him and his mom why would he help her.

Janine arrives back at the party and gives the kid his keys back, telling him a coyote ran out in front of her.

Later, Janine is in her room when she is accused by one of the men from the crew of stealing. He shoots a gun in her direction for fun proving that she wants to live.

Angela confesses to Pope that she once ripped Julie off and left J. She has been lying her whole life. But now she is clean.

Craig heads back to Frankie to tell her he trashed the building and the art piece with washable paint. It will force them to move it. When they do he plans to steal it then.

Angela lets herself into Pope’s bedroom and climbs in next to him. She rubs his back. He lets her hold him.

Frankie tells Craig the news, the art piece is being moved. Meanwhile, J comes to see Smurf. He found her a lawyer. She doesn’t need him to. Smurf’s doctor calls. She has skin cancer and it has spread. She stops listening as she watches the guys share a drink across the house.