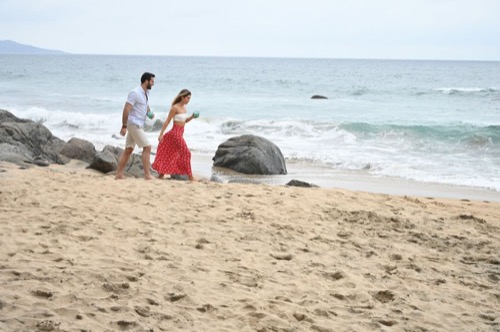 Tonight on ABC after weeks of drama, romance & more Bachelor in Paradise airs an all-new Tuesday, August 5, 2018, episode and we have your Bachelor in Paradise premiere recap below.  On tonight Bachelor in Paradise Season 6 Episode 1 as per the ABC synopsis, “In the Season 6 premiere, Bachelor Nation members arrive at the Mexican resort, where they’re greeted by host Chris Harrison. Blake, who has already gotten to know a few of the women before arriving in Paradise, gets the first date card.

Both Hannah G. and Caelynn have high hopes of receiving that invitation but are extremely disappointed when he chooses another woman. But that opens the door for two guys to spend time with one of the overlooked ladies.”

These people all thought they would have found love by now. They had put themselves out there for their respective bachelors and bachelorettes, but it never seemed to work out for them. They were often heartbroken by their seasons and so a chance in paradise was here make up for it. Some of the contestants this year knew each other from previous events. They’ve talked and many of them knew which ones they wanted they dated while they were Mexico.

There were a few upsets when more than one person liked someone and so it was all about fighting for their chance. They had to be seen and they at least needed one conversation. And right from the start, Tayshia and Hannah G. had people vying for their favor.

Some, however, had come to paradise with baggage. There was one contestant that was technically in a relationship and her name was Demi. Demi was dating another woman. She doesn’t want to apply a label to herself and so the best description for her would be “fluid”. Demi has fluidly pursuing love.

She was here in paradise because she was considering if she wants to take that extra step with her girlfriend and embrace exclusivity. The fact she hasn’t already taken that step could also mean her current partner isn’t her forever partner. Therefore, it’s a good thing here this season. She could date a variety of people and figure out what she wants. And so it would only be unfair if she develops something with someone this season and failed to disclose the girlfriend she left behind.

Then there was John Paul. He was more interested in looking good than he was in looking for love. There was one incident when a young woman was talking to him and he stopped paying attention to her in order to check himself out in the cameras. John Paul even arrived in a speedo. So he was all about the vanity and less about actually being interesting. There was also Clay who was just recently coming out of a relationship.

He had been dating a friend of Annaliese’s and so she was keeping a close eye on him because she knew the full deets on the failed relationship. She knew that he told Angela that he couldn’t dream of looking at another woman and that made her question why he was even here.

There was also the issue between Caelynn and Blake. They dated each other after meeting at one of the events and the relationship seems to have ended badly. Blake didn’t want to stick around when he saw her, but there weren’t plenty of places he could hide and so that alone upset Caelynn.

She didn’t think she was so horrible that a man had to run away from her. Caelynn did her best to ignore him after that and she tried focusing on herself because she like everybody else was heading to Paradise with layers. Caelynn knew the others would have a past. She and the rest of the women had talked about it when they were up in the room. They each mentioned who they liked and everyone seemed to like Blake. And so Caelynn had wanted to say something.

Caelynn wanted to tell the women how horrible he was. He had treated her as if she was a mistake and Caelynn didn’t want another girl to get hurt as she did. She again wanted to say something when later Blake won the first date. He could have a pick of the ladies because everyone still believed he was the “dream guy” this year and so some of the guys were actually pretty nervous about his date.

Some of them didn’t want him to take out Hannah G. because they liked her, but they didn’t need to worry about Hannah G. because Blake asked out Tayshia. It had come as a surprise for everyone and it got some to gossiping. The others started to believe that maybe Blake is playing the long game. And that he would eventually ask out Hannah G.

It was a little bit spiteful on their part because it was like they weren’t considering that maybe he really is interested in Tayshia, but that okay because Tayshia showed off some. She showed off her pretty beach dress and, while there were some naysayers, she had some like Dylan that was shipping her with Blake so hard that it was funny. Dylan wanted those two to go on a date because he was interested in Hannah G.

He was actually mopping in his drink earlier because he thought he lost out on his chance with Hannah and so now that door was open again. But Hannah was actually pretty upset. She thought she had something with Blake and him not choosing her had made her feel like crap. Like maybe she wasn’t good enough.

Meanwhile, Caelynn finally told someone about Blake. She told the bartender how she slept with Blake and how he told her the next morning that he slept with Kristian just one day before. He also talked about how interested he was in Tayshia. They were still in bed together and he was talking about other women he found attractive. Blake was simply the world’s biggest jerk. He didn’t know how to treat women and so it was time for the women to stop chasing him.

Caelynn told the bartender everything. She also talked to him about bringing it up with the rest of the women and he fully supports whatever decision she makes. The bartender has sort of becoming the main confident this year. He was advising Caelynn and he had advised Dylan to take his chance when he sees it.

The bartender knew what he was talking about. He saw a group of people that all wanted to find love and some were too scared to reach for it. Take Caelynn for instance. Sure, she had great intentions with wanting to tell the other girls about Blake and at the same time she wasn’t exactly looking around for herself. She kept herself in her angry bubble and she couldn’t leave it until she talked to Onyeka about it. Onyeka was really nice to her. She assured Caelynn that she was the highlight of Blake’s life and that she was no one’s mistake. She also told Caelynn that she didn’t need to hide her past. She said that Blake didn’t get to dictate what Caelynn can say. Caelynn was her own person and she had someone in her corner to remind her.

Then Kristina showed up. Kristina and Caelynn slept with Blake within twenty-four hours of each other and they both knew about it. Kristina it seems came to paradise because she had some unfinished business with Blake. She had also showed up with a date card and so Cam ended up volunteering. He was instantly attracted to her and he wanted her to know that he was available. The others had laughed about it when it happened though no one could hate on Cam. Cam did what many of them were afraid to do. He also failed to win over Kristina. Kristina did go over to Blake afterwards and they did talk. Kristina had even invited him on the date. He had said of course because things ended with Kristina a little better than it did with Caelynn and so he had no idea that Kristina wanted revenge.

Kristina admitted in her confessional that she was going to make Blake her bitch for what he did to her.

And so the drama has already started!