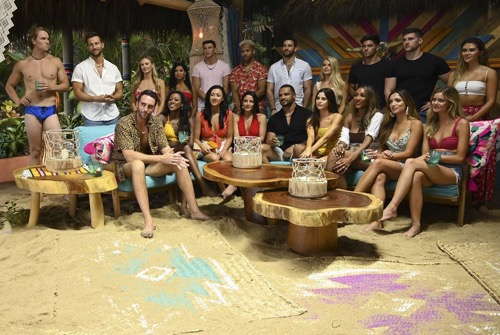 Paradise was already up in flames. Hot new arrivals came to tempt the women. They also made the guys sweat with their antics and so that when the rest of them decided to step up. Some went after the women they wanted, but there were also others that just confused the women. Hannah was confused because two men were pursuing her. Both Blake and Dylan have made their feelings for her known and so she didn’t know who she was going to choose. She said things were up in the air for her. She also wasn’t making sense because most of the women have gotten a feel of Blake by then and they knew he was a player. He tried to date every girl on the beach. He made out with the ones he did have a date with and he still treated them like crap come the next morning.

Only the other women weren’t worried. They said that Hannah would pick the first guy that offered a rose and they were right. Hannah accepted Dylan’s rose because it was the first she was offered. Her decision had sort of put out Blake because he thought he could have Hannah and so he went with his second option. He gave his rose to Tayshia. Tayshia accepted it because she just wanted to stick around long enough to find love with someone else and so she was one of the lucky ones. There were plenty of girls that went home because no one offered them anything, but one the girls went home, some fresh blood was brought in. Jordan from Becca’s season was one of the newbies. He also almost got engaged last season Bachelor in Paradise and so he said this time was different.

Jordan came back with confidence this year because he knew nothing was going to stop him from finding love. He came upon the beach and said “welcome to my beach”. His swagger quickly gained the attention from the women and he pulled several of them aside to find out how things were in Paradise. He first talked to Hannah. Hannah admitted that Blake and Dylan were both interested in her though Jordan got the feeling that it was Blake that was the problem. His feelings on the matter were backed up by Nicole and Kristina. The women said that Blake had been with most of them. He one-nighted Kristina and Caelynn. He then asked Tayshia out on a date. And then he grabbed Hannah’s interest by ghosting her one night and claiming to return her feelings the next.

Blake was a problem. Jordan got that and he hadn’t even been around all that long. He was also the only one that was willing to something about it. He decided to step on Blake’s toes by asking Hannah out on a date and she said “yes”. She didn’t consider either Blake or Dylan in her consideration until later. She thought about it and that’s when she told Jordan she couldn’t go on a date with him. Which Jordan had been shocked by. He thought Hannah wasn’t considering herself in all of this and so he went to talk to Blake. Blake has left most of these women confused. He’s been leading them on and Jordan wanted him to fix it now before it was too late. He told Blake to talk to these things out with women.

The women deserved clarification. Blake couldn’t keep leading women on and Jordan also didn’t want to have another Kristina situation his hands. She looked like she was about to cry when she talked about Blake. He hurt her and she clearly wasn’t over it yet. Her situation also made Jordan realized that he needed to stay clear of people who’ve formed an attachment and so he talked to Nicole. If she wanted to be with someone else that was okay, but she took him up on his offer for her own reasons. Nicole wanted to make Clay jealous. They were sort of together and Nicole wanted Clay to see that there were other options out there for her. And her plan worked, Clay had been gutted by the date and he made a few jokes to mask his broken heart.

Joran didn’t know he was part of some jealousy plan. He actually looked forward to that date and he even got excited when they found out they were going to be zip-lining. Jordan had looked forward to it. He also never suspected that this was Nicole’s worst fear and that she was only willing to tackle it because he talked her through it. Nicole, it seems had forgotten about her own plan when she started to find Jordan sweet. He took her by surprise with his kind demeanor and he wasn’t afraid to mention his past. He was committed to a relationship last time. He had even proposed to the young woman and then they broke up the same day. It just wasn’t meant to be. Jordan could see that now and he didn’t want to make the same mistake.

Jordan told Nicole he was looking for love and he wasn’t the only one. Cam pursued Caelynn and he was trying to make it work when another newbie showed up. Mike Johnson had come along. He was handsome and charismatic. He also had a date card. Mike could have asked anyone out and he zeroed in on Caelynn. Caelynn hadn’t made a promise to anyone else. She did, however, tell Mike that she’s been talking to Cam and he chose to ask her out anyway. To Cam, it was like the past repeating itself. Cam had lost out on his season with Hannah because Mike had implied he was manipulative and that had gotten Cam sent home. So Cam didn’t want to push aside again. Not when he already envisions a future with Caelynn.

Caelynn meanwhile was enjoying her date with Mike. They enjoyed dinner with live music and they both have the same sense of humor. Their date itself was nonstop laughter. They couldn’t stop themselves from laughing about their shared backgrounds and how it shaped them to be who they are today. Caelynn also got a great feel of Mike. He was respectful of women and that’s what she needed the most. Caelynn was still reeling after everything Blake did to her. He bragged about finding other women attractive while they were still in beg and he crushed her self-esteem on top of it. And so no wonder Caelynn was responding so well to Mike, he was asking about her life and what she wants and most importantly he was listening to her.

Nicole later came back from her own date, but this time she resolved her feelings about Clay and so she told him that he came out ahead of Jordan. Jordan was sweet and everything but he was no Clay. Clay was the one Nicole wanted. She cuddled up to him on the beach and they had a full makeout session in front of everyone. Their situation wasn’t like Katie’s. Katie was told the sweetest things from Wills and for some reason, she had a breakdown. She cried as she explained that she wanted to pursue her other options. She was still crying as she talked about it with her friends and that made Chris sad. He didn’t like seeing her so dejected. He also had feelings for her and so went right up to her and he told her how he felt.

Chris and Katie had developed a connection. Which is what Katie wanted and so she was finally happy. Even when no one else was! Blake had hurt himself on the beach and everyone thought he would be laid up somewhere in pain, but Blake came out on the beach to take Hannah aside. He said he wanted to talk to her because he didn’t think they got the chance to talk in some time and really he used that as a ploy. He knew darn well that she had been hanging out with Dylan. Dylan and Hannah were even creating something when Blake came along. He talked to Hannah and whatever he said must have been enough for her because they were soon making out on the beach.

They did in full view of Dylan, so he wasn’t happy and his friends weren’t helping. Some of them told him to go down there and some did at least try to convince him not to. But Dylan ended up going down there. Dylan tried to create some boundaries with Hannah and she completely ignored him. She let Blake do all the talking for her and so she stayed with Blake as Dylan walked away.

So the women now believe that Hannah was the player all along, and not even Dylan wanted to defend her.