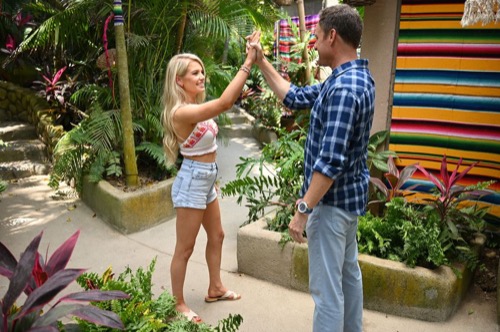 Tonight on ABC after weeks of drama, romance & more Bachelor in Paradise airs an all-new Tuesday, August 20, 2019, episode and we have your Bachelor in Paradise recap below.  On tonight Bachelor in Paradise Season 6 Episode 6 as per the ABC synopsis, “Demi explains to Chris how conflicted she is between staying and exploring a relationship with a man she cares deeply for and leaving for a certain woman she can’t stop thinking about back home.”

Tonight’s episode of Bachelor paradise opens with Chris H. sits down with Demi, Derek is feeling every feeling imaginable watching the two talk. Demi tells Chris H. that she was dating a woman before going to Paradise and the chemistry is so there, she can’t imagine not having her in her life. She says that Derek gives her a lot, but enough, she can’t stop thinking about this girl back home. Furthermore, she doesn’t want to lead Derek on and hurt him. She asks Chris H. for advice, he says he supports her no matter what decision she makes. Meanwhile, Derek is so conflicted and doesn’t know what more he can do.

Demi knows that Derek is very accepting of her, but that is making it even harder for her to make a decision. She doesn’t want to lose anyone, but one of them deserves to have all of her and she is terrified that she is not going to make the right choice.

Caitlin is still super interested in Blake and wants to show him that she wants to pursue him a little more; but Kristina keeps getting in the way. Caitlin and Blake are having shots and Kristina walks up and takes him away; Caitlin can’t believe that he is giving her the time of day. Kristina is just trying to secure a rose for herself and doesn’t care if she sabotages Blake’s potential relationship with Kristina.

Caitlin takes Kristina to the side to have a chat with each other. She tells her that she has heard about her past with Blake and is just wondering what her motive is. Kristina says that she just wants her friend to find love. Caitlin tries to interject and Kristina starts to get rude with her. Caitlin goes on to say that Kristina is just trying to secure herself a friendship rose, when other people are there to fall in love. Kristina has a huge attitude, Caitlin tells her that she is impossible, awful, and should learn how to respect women.

Clay is really enjoying being around Nicole and he can’t wait to see where their relationship goes.

Chris B. took a huge risk in coming back, he is looking to get married and for now, he is having fun with Katie. She tells him that other girls are going to be coming in and if he goes on dates, she won’t mind. Chris B. doesn’t like this, it makes him feel that she is not serious.

In walks Jen to Paradise Island, and all the women are sweating a bit. The first person Jen asks to speak to is Blake, then Dean, then Chris B and Katie wishes she had not said what she had earlier in the day. In the end, Jen asks Chris B. on a date and he says yes. Before heading out, he tells Jen that he wants to go speak to Katie; he tells her that he likes her a lot, and wants this to bring in more clarity, not to digress what they have.

Jen and Chris B. go on a catamaran; he is excited for the date and looks forward to getting to know her more. They pop some champagne, and strip down to their bathing suits. All of a sudden the water starts to get really rough and their date goes down really quick when Chris B. gets sick. They head back to Paradise, Chris B. tells her that he wants to make it up to her and spend more time in the evening with her.

Chris B. sits down with Jen and enjoys some champagne. He tells her that he is not sure if he can get to the next level with Katie. He then goes on to say all the things he likes about her. The two head in the hot tub to continue talking. It doesn’t take long for Jen to lean in and kiss Chris B. who is so conflicted because of his feelings for Katie. Jen really likes Chris B. but doesn’t know the extent of the potential to takes things further with him.

Chris B. returns from his date and searches for Katie. He says that Jen will fit nicely into the group. Chris B. tells her that it was weird for him when she told him to go on dates. She says she self-sabotaged herself and really wants to fight for him, he makes her happy. Chris B. says that something is missing and there is a little bit of doubt, he needs to think on it.

The next day, Katie is with Blake chatting on the beach. They talk about the couples and their opinions on everyone.

Chris H. walks on to the beach and says hi to everyone; he asks Demi to talk for a bit. Chris H. says that a lot of their conversation went over and over in his head, all he cares about is what is best for her. They have come to a decision; Demi heads upstairs and there is the woman she is smitten with. Kristian has been dating Demi and is there to prove her commitment. They sit down and talk, Demi tells her about Derek and that she is so confused. Kristian asks Demi if she has feelings for Derek. Demi says the moment she saw her arrive on the beach she had clarity, it is her and only her. Before they do anything else, Demi says that she has to speak to Derek.

Derek and Demi head on the beach to talk. She starts by telling how great he is and says that she was a little because she was confused. She goes on to say that Kristian is there to give her clarity, and her heart is with her and she is going to pursue her relationship with her there. Derek tells her that he is glad she is doing what makes her happy, but he would like to know what made her switch from him to her. Demi says it is not about anything that he did, it is just about her heart.

Derek is heartbroken, the spark he felt for Demi left as fast as it came. It’s the same rejection that Derek has always gotten, it doesn’t matter if it was a man or a woman, it would hurt the same.

Derek asks Demi if he can speak to Kristian. Demi introduces the two, Derek tells her that it is bittersweet to meet her. Kristian says that they could not have foreseen this and she holds nothing against him.

Demi walks into the pool area with Kristian, everyone looks confused. Demi introduces her and reveals to everyone that they were dating before she came to Paradise, and they are going to stay in Paradise and explore their relationship.

Hannah walks up, she has a date card for Demi and Kristian, it reads, “please use this to rekindle your flame.” Derek just looks on and smiles.

Demi and Kristian go on their date, they head to a private area to have dinner. Kristian reveals that it was really hurtful that she pursued a relationship with Derek after all they had; it made her feel like she doubted their relationship. Demi says that she avoided going to the next level with her because of her emotions and the more she was with Derek, she wanted to be with her and will do whatever she can to be with her moving forward. The two kiss and say I love you.