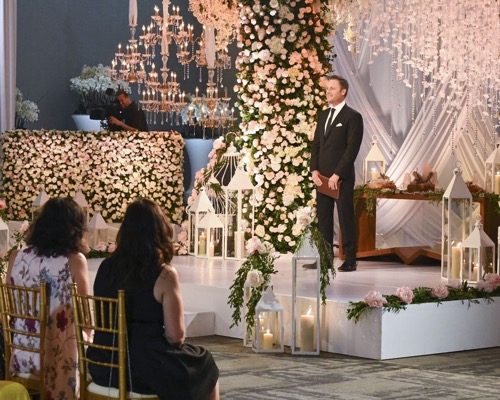 Tonight on ABC after weeks of drama, romance & more Bachelor in Paradise airs an all-new Tuesday, August 26, 2019, episode and we have your Bachelor in Paradise recap below.  On tonight Bachelor in Paradise Season 6 Episode 7 as per the ABC synopsis, “Tayshia has been having a lot of fun with John Paul Jones, but she encourages him to explore his options with other women. Tayshia, meanwhile, pursues another relationship with a wonderful guy.”

Tayshia loved last week but is stressed out this week because the guys are the ones who have the roses. Although, she has her eye on Derek and since Demi has dumped, he is up for grabs.

Jean-Paul Jones is thrilled, he thinks he and Tayshia are becoming an item and she is the only woman he can imagine having a relationship with. Tayshia knows he cares for her deeply, but she doesn’t know if she can imagine him as her husband. She asks him who he would want to come on the island next, he says he hasn’t thought about it. She then tells him that if he is asked to go on a date, he should go.

Tahzjuan from Colton’s season is the next woman to enter paradise. She has a date card, and first goes the rounds and speaks to the guys, Jean-Paul Jones is first. Tahzjuan circles around go back to Jean-Paul Jones, asks him out on a date, he says yes. He has strong feelings for Taysha, but he is going on this date for her.

At dinner, Jean-Paul Jones and Tahzjuan get along very well. He can’t stop laughing and she can’t stop sweating. Jean-Paul Jones wants to eat the food and she tells him that he is not supposed to eat it, nobody eats the date food. He takes a bite, has trouble swallowing it and then starts coughing and looks like he’s going to vomit. They go on to dancing, and both get on very well. Tahzjuan loves the mystery about him and wants to get to know him more. Tahzjuan is still sweating, she tells Jean-Paul Jones that she wants to jump in the water. Once they are in the water, he leans in for a kiss – she doesn’t want the night to end.

Back at the beach, some people sit around a fire and talk about the worst kisser ever. Derek asks Tayshia if Colton was a bad kisser, she says he got better towards the end of the season.

Caelynn is super happy about her relationship with Dean, but Demi cautions her to be careful because he does have a reputation. In fact, Demi thinks Caelynn needs to lay down the law. And if he is not serious about being with her, then he is not worth it anyway.

Caelynn takes Dean to the side and wants a serious conversation with him since her talk with Demi. He says that he is clearly happy her and he doesn’t want to spend his time with anyone else but her. She says people keep warning her because of his reputation. He goes on to say to hear that talking about his feelings and emotions really don’t appeal to him. She thinks his mind is made up, there is no relationship after paradise. Caelynn feels stupid, all Dean wants to do is have fun, he made it very clear.

Caelynn goes over to the bar area, Blake sees she is upset and asks if he can hug her, she says no.

Jean-Paul Jones is completely exhausted from his date the night before with Tahzjuan. Meanwhile, she is happy that after day one she has a viable prospect.

The next girl to arrive in paradise is Haley, one of the twins from Ben’s season of The Bachelor. She is looking for someone really goofy and thinks might get along well with Jean-Paul Jones. Haley has a date card, she asks Jean-Paul Jones to take a walk with her so she can chat. She asks him if he is in a serious relationship, he says that he and Tayshia hit it off and he was on a date with Tahzjuan the night before. It doesn’t take long for Jean-Paul Jones to get asked on the date, this is two in a row and Tahzjuan is jealous. She says they were both eagles flying in harmony and Haley messes it all up.

Caitlin can’t believe that Tahzjaun has it written all over her face that she is not happy that Jean-Paul Jones is going on a date with someone else. He takes the time to go speak to her before he leaves. It doesn’t help, all she does is cry and complain while he is gone. Tahzjuan almost faints, medics come to take her blood pressure and tell her to drink more Gatorade.

On his date, Jean-Paul Jones is horseback riding on the beach with Haley. She is having a blast on the date and has never met anyone like him.

Back at the beach, Tahzjuan is still having trouble with the heat, she is sweating, drinking water and complaining about everyone else being cute with each other.

Tayshia feels bad for Tahzjuan, she had one date with Jean-Paul Jones and she is having a mental breakdown. All she does is cry, whine and complain. In fact, she is slowly spiraling out of control and it is just a matter of time before she derails.

Its final evening time, Jean-Paul Jones and Haley are finished their date and they seal it with yet another very long kiss. They head back to the beach, holding hands. The two arrive back at the bar, Tahzjuan is there and asks if they kissed; Jean-Paul Jones says yes and they had a great time. What an awkward moment, Tahzjuan asks Haley if she can spit in her wine; then she starts to cry again. Tahzjuan tells Haley that she is a pigeon and she and Jean-Paul Jones are seagulls. Haley walks away. Jean-Paul Jones tells Tahzjuan that he had a great time with her, and he is sure at this point that this talk is uncomfortable for both of them, and he is both mentally and physically exhausted.

Tayshia walks with Derek, she wants to explore other connections because Jean-Paul Jones just has too much drama surrounding him. Derek tells her that he didn’t know that what he had with Demi would end so abruptly, he starts to tear up. Tayshia tells him that Demi has what she wants, he has to figure what he wants to make him happy. He says that he is crazy attractive to her, but he is questioning whether he should still be in paradise. Tayshia tells him that he deserves happiness and don’t take away from his experience there. Tayshia hugs him and hopes that he will be able to move on and explore a relationship with him.

Time for the cocktail party, Chris H. walks in and reminds them that it is Rose Ceremony night. He tells the ladies that if they plan to stay in paradise, they better have some conversations before he comes back with the roses.

Caitlin takes Blake to the side, he is her best shot at getting a rose. Blake tells her that she is 100% getting his rose, just as Kristina walks up and interrupts them. Kristina tells Blake that it is not really into Caitlin then he shouldn’t give her his rose. Blake is a little surprised.

Blake goes right back to Caitlin and tells her that he is not 100% sure of what he is going to do after speaking to Kristina because she deserves another chance to find someone next week. Caitlin tells him that he likes him and thinks he is awesome. Blake apologizes and tells her that he didn’t mean to blindside her. Caitlin has given it her all to find love and can’t believe Blake is doing this to her.

Tayshia takes Derek to the side, he tells her that she is so pretty and he would love to break the barrier of their friendship and see where it takes them. Tayshia says in private that he is a better kisser than Colton, so she has already upgraded!

Its Caelynn’s birthday, Dean surprises her with a cake – she is 24 years old.

Chris H. is back, and everyone looks very serious. He says that paradise is all about finding love, no matter what that looks like and he is going to change the rules. The men are handing out the rose, but Demi will hand out the first rose; she offers it to Kristian. As expected Hannah gets her rose from Dylan, Clay gives his to Nicole, Mike to Sydney, Dean to Caelynn, Blake to Kristina and he tells her that he hopes the rose allows her to find the person she was looking for, Derek to Tayshia, Jean-Paul Jones to Haley and the final rose, Chris to Katie.