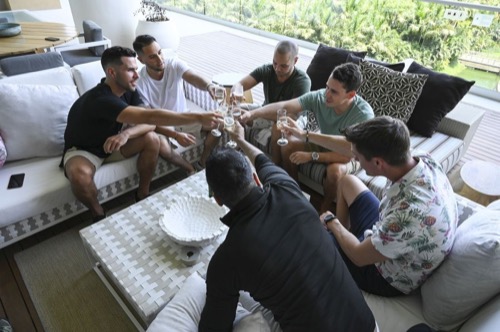 Tonight on ABC after weeks of drama, romance & more Bachelor in Paradise airs an all-new Monday, September 2, 2019, episode and we have your Bachelor in Paradise recap below.  On tonight Bachelor in Paradise Season 6 Episode 9 as per the ABC synopsis, “Angela’s arrival brings trouble when Clay discovers feelings bubbling up for his ex-girlfriend that put his current relationship with Nicole in jeopardy. Angela also must tackle her unresolved feelings for Clay as she tries to move on with Mike.

Meanwhile, Haley is developing feelings for John Paul Jones, but when Derek mentions that her new love interest is also really crazy about Tayshia, it sets off a series of face-offs between the two men vying for Tayshia’s heart.”

Nicole is so happy, confident, sexy and proud because of her relationship with Clay and she doesn’t think anything can ruin it, until Angela, Clay’s ex walks in. Nicole’s heart drops to the pit of her stomach. Angela announces that she has a date card, “it is time to finish your love story.” Angela first takes Mike for a walk to talk before choosing who she wants to take on her date. While she is gone speaking to Mike, Nicole tries to secure things with Clay by putting Angela down. When Nicole looks over at Clay’s face, she can see how this is affecting him. Nicole asks Clay if he would go on a date if Angela asked him, he says zero percent chance. Nicole can see Angela is not over Clay and knows she is going to intrude on her space. Nicole decides to grab the bull by the horns and go speak to Angela.

Nicole tells Angela that basically she just needs to stay away from Clay and she doesn’t care what she does on the island. In the end, Angela asks Mike to go on the date. Meanwhile, Clay is upset that Angela is there, he wanted to move on. Tayshia is not happy with the whole situation because, at the wedding, Clay did not mention that Nicole is his girlfriend. She confronts Clay and asks why not? Clay claims that it was not intentional. Tayshia hopes and prays it works out between Clay and Nicole, but she has a lot of doubts.

Mike and Angela leave for their date. It feels a little weird for Clay, his friend going on a date with his ex-girlfriend. Meanwhile, most of the ladies are not buying that Angela is there to meet a new connection, they feel that she is not over Clay and wants him back.

On their date, Mike asks Angela if Clay broke her heart, she says yes and that Clay was her greatest love. Mike reveals to Angela that Clay said it was easy to break up with her because he never said that he loved her.

Meanwhile, back at the beach, Blake tells Clay to just pretend that Angela is not there.

Haley has a big crush on Jean-Paul Jones and can see herself potentially falling in love with him. Little does she know that JPJ has much stronger feelings for Tayshia. JPJ thinks Derek is a fraud and doesn’t want him near Tayshia. Meanwhile, Derek is talking to Haley and tells her that JPJ is really into Tayshia. Haley is ticked off that Derek is the one to tell her that and JPJ didn’t.

Haley goes to speak to Caelynn and tells her she was really excited about JPJ and is bumped that he has feelings for Tayshia.

Haley searches out JPJ for a talk, she tells him that she heard from Derek that he has feelings for Tayshia and she is confused because they had an instant connection on their date. JPJ says he owes her an apology, they did hit it off on their date, but he hit it off with Tayshia first. She says she is hurt and would have appreciated if it had come from him. He says it is none of Derek’s business, he wants her to find what she is looking for, but that is where he stands. At this point, Haley would rather go home, she is sick of dating.

Caelynn and Connor go on a very sexual date and she couldn’t be happier.

At the bar, Haley tells off JPJ, Demi is listening in and just enjoying it. JPJ apologizes to Haley but also includes that she is a big girl and can give her rose to somebody else if she wants to. Next, Haley goes to see Blake and confides in him. Haley asks Blake why men torment women like this, little does she know how much of a player he is. Caelynn walks up and Haley says she doesn’t know who to give her rose to, is she supposed to give it to someone because they are good looking like JPJ did!!

Derek asks JPJ to go take a few minutes and talk. They walk down to the beach and everyone is afraid of what will happen when these two are alone. Derek says he understand how they could have been friends to where they are now. JPJ tells him that he is not good for Tayshia and she has already made her choice. The two go on to argue whether Tayshia made up her mind on who she wants. The two start shouting. Tayshia is listening in with some people and says she is done with this and they shouldn’t be watching it. JPJ walks off in one direction, Derek in the other. Everyone is fed up with these two guys, even Tayshia and it will be interesting to see if either of them get a rose from Tayshia.

Haley and Tayshia talk, she tells her that she felt JPJ was into her because he said he felt strongly for her after the date. Tayshia tells her that it hurts her to see her hurting. Tayshia realizes that JPJ is young and that is the reason for some of his actions.

Tayshia is emotionally and mentally drained from Derek and JPJ. All of a sudden, Matt from Hannah B’s season is coming down the stairs into paradise. Matt has a date card, but it is only half of a date card. Down the stairs comes Luke, he sent himself home on Hannah B’s season, and he has the other half of the date card. They can now read the date card, “it’s now time to heat things up in paradise,” it’s a double date. The two new guys do the rounds and speak to the women. In the end, Matt chooses Sydney and Luke chooses Kristina.

Everyone is coupled up around Blake and he is bumped. He tells Demi that he is frustrated, he thought that by now that he would have had a connection with someone. Meanwhile, his bestie, Kristina is really enjoying her date with Luke. Although, the way Kristina talks about Blake, Luke is not sure if she is over him and just friends. Matt is teaching Sydney sign language and is afraid to kiss her on camera because he thinks his mother would freak.

The next morning, JPJ takes Tayshia to the side and asks if he can speak to her. He starts off with an apology, he says he felt bad about the evening before and can tell that she is distant. He says that he takes this seriously, he admires everything about her. She says that she didn’t like that he was fighting with Derek and it rubbed her the wrong way. He says that he has only tried to do the right thing and he has strong feelings for her; he starts crying and tells her that he wanted to give her space, but he is there looking for something serious and he cannot handle, after the moments they have spent together, to not be around her. Tayshia walks off down the beach and JPJ leaves and continues to cry.

Tayshia tells Sydney that she just doesn’t know what to do, she really is confused. Sydney tells her to put the mess aside and just choose the man that she has more feelings for. Tayshia leaves her and goes to speak to Derek. Derek tells her that it has been an emotional couple of days, not what he was expecting to deal with. Tayshia tells him that it has been hard and she is trying to wrap her head around this and be honest with everyone involved. She goes on to say that they had a slow start and a good foundation for a great friendship. She goes on to say that she just doesn’t know if she can get romantically involved with him. He is surprised and asks if there is any way she could get there and she says she doesn’t think so. She says she respects him and appreciates him. Derek accepts what she says, but admits that it really hurts for her to say what she did. Tayshia admits he is a good guy, he is just not her guy.

JPJ tells Dylan and Hannah that he had a great conversation with Tayshia, he let her know how he felt. Derek calls everyone near and tells them that he is going home after not being able to make a connection on the island. Tayshia can’t hold back her tears, she feels responsible for his going home. Derek hugs everyone, just as he is leaving, Tayshia runs up to him, hugs him and says he is sorry. Derek leaves.

Tayshia feels so bad, she didn’t think she had that much power to have someone go home on their own. She is confused and has no idea what she is going to do next.