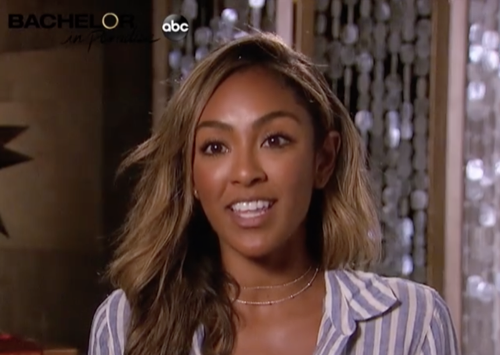 Chris and Katie hope that their make-or-break date will show them just how amazing their relationship could be.”

Tonight’s Bachelor in Paradise opens and Dean is back and he is speaking to Caelynn and asks her if she will leave paradise with him. All she has to say is, ‘this is wild.” He tells her that she shaved the mustache for her, he is a changed man – and it all comes down to what she wants to do. She asks him if she can speak to Connor, he says of course. Caelynn returns to the bar area, the women hug her, then Connor hugs her and they walk away to talk. She tells him what Dean said. He says that he wants to keep this going and he can definitely see a future with her. He goes on to say that actions speak louder than words and none of Dean’s actions are going to show that he wants her and respects her. Connor wants her to be there, he doesn’t want her leaving, he wants to protect her. She says the chapter with Dean was closed until he came back.

Dean is talking with Kristina and he tells her that he asked Caelynn to leave with him. Kristine calls him crazy and selfish and tells him that she already has a connection with Connor. Kristina goes back to the group and tells them everything.

Caelynn is headed back to Dean, Connor back to the group. Caelynn tells him that this is so confusing, what they had and how he said that he was a terrible boyfriend. He agrees, but he has identified those issues and wants to improve by facing them head-on. She says she knows the decision that she wants to make but she is afraid to get hurt again. He says that he is afraid of the same thing. He says when he looks at the short amount of time they had on the beach, he was responsible for a lot of smiles and happiness, and he wants to continue doing that. She agrees to leave with him, he leans in for a kiss. The two rolls around on the cot and Connor gets up, its beyond him what happened.

Caelynn then goes to tell Connor that she is leaving because her heart is being pulled to Dean. It is just mind-blowing to Connor what just happened.

Katie likes Chris but she doesn’t feel like Caelynn like the guy would do anything to be with you. Katie thinks maybe they need a date. By coincidence, Jean-Paul Jones arrives at the bar with a date card, it’s for Chris and he asks Katie on the date.

Connor is crying and Blake walks in to console him. Connor says that Caelynn obviously downplayed her relationship with Dean and it sucks; he is frustrated and never experienced anything like this in his life.

Chris and Katie are at dinner. She tells him that she wasn’t sure if she would find the guy in paradise but she is ready for it. Chris says that he hasn’t given her 100%, he went there for a reason and he does throw “I love you” around, it is reserved for the right person. She asks if he has ever been in love, he says yes, but he hasn’t been able to express it fully. She then asks him right out if he is just waiting for the next person that walks down the stairs. He says he has a lot of feelings with her and he wouldn’t be with her if he didn’t think it could turn into love. Katie is happy, she feels like they have taken many steps forward. All of a sudden, the two are talking about the future and around the corner comes this wedding parade.

Matt is in a love triangle between Sydney and Bri, and both girls say they had to kiss him so the guys tease him about needing kissing lessons. Just when Connor thought all was lost, Revan walks in from Colton’s season. She has a date card and first calls, Matt, to chat. He tells her that he has a connection with two women right now. Next, she sits with JPJ and tells her that he hit it off with Tayshia. On and on, man after man the same story until she asks to speak to Connor who agrees to go on the date with her.

Connor and Revian have a great date, she is super interested in him. He apologizes to her for being a little down, she tells him it is fine and they kiss.

Meanwhile, Blake is still trying to make Kristina happy and show her that he is the man for her. She tells him that she is still skeptical. Blake is not giving up, he plans on taking his time and breaking down those walls that Kristina put up over the past year.

Katie asks Kristian and Demi how things are going and Demi tells her she doesn’t want to take about it and feels uncomfortable. Kristian has been flirty with the girls and Demi doesn’t like it, she feels like she is more interested in them than her.

Nicole comes in with date card, it is for Demi and she asks Kristian on the date, but really doesn’t feel like going on it. Demi is having a hard time with everyone else see her be intimate with Kristian, because before she was straight and now she is dating a woman. On the date, the two participate in a ceremony and Kristian could see that something was bothering Demi. Demi tells her that she is a touchy person and she is not, and it is a struggle to see her do it with other people. Kristian says there is no sexual attraction to anyone that she touches, she is just a touchy person and it is the way she shows them she cares about them. Demi says she feels like it is going to be a deal breaker because she doesn’t like PDA.

JPJ surprises Tayshia and invites her to the paradise prom. The two get dressed, JPJ gives her a courage and everyone cheers them on. Complete with crowns and champagne, Tayshia’s first prom is complete. All of a sudden, a guys walks up and plays a saxophone. JPJ and Tayshia get up and dance. All the couples join them on the beach and start dancing. Tayshia had a blast and thanks JPJ for an amazing evening.

Blake gives Kristina a date card, it reads “I know we can’t go back in time, but tonight we can make up for it.” Blake tells her that he will meet her in the treehouse in 30 minutes. Blake spreads rose petals everywhere, has champagne on ice, fruit with chocolate. Kristina says she feels really guilty. She tells him that she knows she said she would give them a chance and try, but she doesn’t think she will be able to get where she needs to get. She tells him that it would be very misleading of her to continue these things and she is sorry, she didn’t mean to upset him and wanted to be as open as she could be. She goes on to say that she is leaving paradise and removing herself from the situation. Blake says he didn’t expect this, he doesn’t understand how they got here. Both are crying, for different reasons. Blake tells her he has nothing else to say, then he says bye. They hug, Kristina leaves.

Kristina tells the group that she is leaving, and Blake is in a bad way. Blake genuinely wanted to have a future with Kristina and doesn’t understand why she doesn’t see what he sees. Blake gets up, says goodbye to the group and leaves.