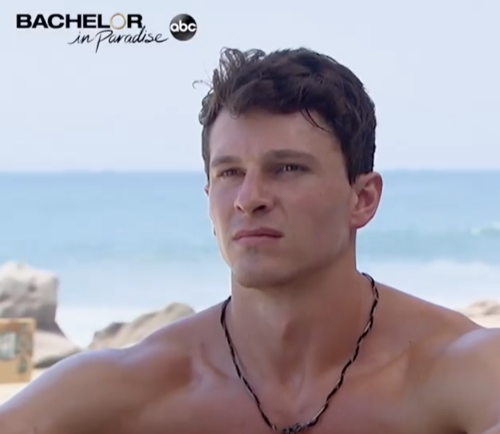 Tonight on ABC after weeks of drama, romance & more Bachelor in Paradise airs an all-new Tuesday, September 10, 2019, episode and we have your Bachelor in Paradise recap below.  On tonight Bachelor in Paradise Season 6 Episode 12 as per the ABC synopsis, “Hannah and Dylan attend a child’s birthday party, giving them a glimpse of what the future may hold and inspiring them to share their feelings for one another. Nicole can’t wait to say “I love you” to Clay. Shocking breakups litter the beach.”

Everyone is feeling pressure because the end of paradise is nearing. Haley asks Demi if she is ready for an engagement, she says she is terrified. Meanwhile, Kristian is talking to Katie about her relationship with Demi and tells her that Demi is not comfortable coming out. Kristian feels anxious, she feels that Demi is sending mixed signals. Demi tells Kristian she feels like they are working it out, and she is amazing. Kristian tells Demi that she feels triggered because relationships were the same where her partner was feeling anxious and didn’t want to display affection in public. Demi hopes that she can get off this weird place where they are not on the same page.

Nicole is talking to Clay, she tells him that she wants to talk about life and their families.

Chris walks in with a date card, this one is for Hannah and it reads, “take someone who feels like home.” Hannah takes Dylan, she wasn’t expecting a date card, on the last date they told each other that they were falling in love with each other. Clay thinks there is going to be an engagement at the of this for the two, he has never seen two people spend more time together.

On their date, they are invited to a kid’s birthday. Dylan is really good around kids, and Hannah is happy to see him in his element. The two help out with the party and enjoy some of the local food. Dylan thinks Hannah is going to be an amazing wife, mother, and can’t imagine his life without her. He tells her that he feels like a real couple, and they are on vacation. He goes on to tell her that he is in love with her, he isn’t struggling anymore – he wants to spend every day with her. Hannah tells Dylan that she loves him too. It’s a scary but exhilarating day for the couple.

Hannah feels like the luckiest woman in the world.

Another date card, this one is for Clay, “when it comes to love, follow your heart.” Clay invites Nicole. Meanwhile, Connor is having a hard time seeing all the happy couples. Although he enjoyed his date with Revian, he didn’t feel a connection. One person Connor did a feel a connection with at the wedding, was Whitney. If she walks down the stairs he will stay, but otherwise, he plans on leaving because he is not giving out a friendship rose.

Connor is on the beach, he is not happy in paradise and just wants Whitney to walk down the stairs. He is staring at the stairs and planning his leaving paradise if she doesn’t appear. Little does he know, Whitney is actually on her way and remembers the amazing conversation she had with Connor and wants to explore things fully. Connor talks to the group tells them he is leaving and says his goodbyes. As Connor leaves, Whitney arrives. She approaches the beach area and everyone is surprised to see her.

She has a date card, “it’s about time you showed up, don’t waste a moment.” Sydney tells Whitney that Connor was super interested in getting to know her further, and he just left. Whitney is shocked, she is actually there and sees no reason why she should stay. Whitney heads to the hotel to catch Connor and go on the date she wanted with him. She knocks on his door, he answers and is thrilled to see her.

Clay approaches the bar to get Nicole for their date. Tonight is so important for the two because the end is near paradise. Nicole has been avoiding asking Clay direct questions about their future. Clay toasts to his beautiful girlfriend in Mexico. He tells her that it is going to be different when they leave there but he does want to figure it out the logistics. She tells him that before she introduces him to her parents or considers moving to Chicago, she would need to know that he is fully invested. She then asks if he sees himself falling for her, he says he just wants to see her and spend so much time with her – and he thinks he is starting to fall in love with her, but he just can’t say that he is in love with her now.

Dylan shares with the guys that he and Hannah shared that they love each other; he feels light years ahead of the rest of the couples.

Tayshia takes Jean-Paul Jones up to the treehouse and she asks him to put on his Speedo she can draw him. JPJ goes and changes into his jean Speedo. She finishes her drawing and the two laugh at what she drew.

Chris is second-guessing his relationship with Katie and doesn’t know if it is the right thing. Katie is feeling it, even if Chris doesn’t say anything.

It’s evening, Chris H. drops in to see the group and tells them that he is canceling the cocktail party and everyone should collect their thoughts. Chris jumps right into the Rose Ceremony. It’s the men’s turn to hand out the roses and some of the ladies will be leaving. Luke is first, he offers a rose to Bri; she tells him that she is there to find love and a relationship, so she can’t accept the rose. Chris says that this has never happened before, he asks if anyone would like Luke’s rose and nobody speaks up. Luke leaves paradise. Matt offers his rose to Bri and she accepts. Dylan to Hannah, Jean-Paul Jones to Tayshia, Chase to Angela, Clay to Nicole, Demi to Kristian. Chris has the final rose to give out, he gives is to Katie. Sydney, Revian, and Haley are leaving paradise.

Matt woke up knowing that he made the right decision. It meant a lot that Bri accepted his rose. Chris H. walks in and tells them that he is overdressed, they all laugh. He announces that Bachelor in Paradise as they know is over. What is next is overnight fantasy suites, and every couple has to have a conversation and be brutally honest. If they are not ready for that, then they need to pack up and go home.

Matt takes Bri to the side for a chat, she tells him that she thinks he made the wrong decision in giving her the rose, and she can’t see this going any further. Bri walks away.

Chase and Angela talk, he tells her that he thinks there is one intangible missing between the two of them.

Hannah and Dylan talk, she tells him that she wants to spend more time with him, and that includes fantasy suites. Dylan says yes, they kiss.

Clay and Nicole chat, she tells him that she is emotional because he looks so genuinely happy to see her. Clay says that he is hopeful for them and excited for what could happen, maybe her going to Chicago.

Tayshia and Jean-Paul Jones are next, he tells her that he has some of the happiest and magical moments with her and he wants to dance with her at their wedding one day, and he is in love with her and doesn’t want this experience to end. Tayshia kisses and hugs him, then she says that she has cherished everything they had had in Mexico but to hear that he is in love with her, she is not there yet. She tells him that he doesn’t even know what he wants in a partner, he says he does know, he wants her, she is the most amazing woman that he has ever met. He thanks her for some of the most magical moments of his life. JPJ walks away, Tayshia runs after him, tells him that she is sorry and hugs him. She tells him that she doesn’t want him to go, he turns around and leaves says goodbye. Tayshia also leaves.

Demi and Kristian are next. Kristian tells her that she has to make sure that she is getting what she needs out of this relationship as well. Demi says she feels like she doesn’t totally deserve her because she has been holding back, she hasn’t been giving enough because she is wrapped in anxiety. She goes on to reassure her that she needs to do more and will do it because she chooses her, she is all in.

Katie is nervous, she knows that something is up and if they break up, she will be crushed. It’s time, Chris calls Katie for a chat. Chris rubs his forehead, then tells her that this has been crazy and awesome. He says that he feels so unsure, he doesn’t know. He pushes people away lots of times and honestly, he wanted to tell her that he didn’t feel it anymore, and there are other times where he felt on cloud nine with her. He doesn’t want this conversation.

She says that she is a little blindsided, she wants to be with him, but she doesn’t want to pressure him into it. She goes on to say that whether it is her or not her, he needs to figure things out. He says he wants to give this a shot, she says ok. He has pushed away great things in his life and is willing to take that risk to see if there are more clarity and a great relationship. Chris H. is back, he asks everyone that he hopes that they enjoy dinner and the fantasy suite.