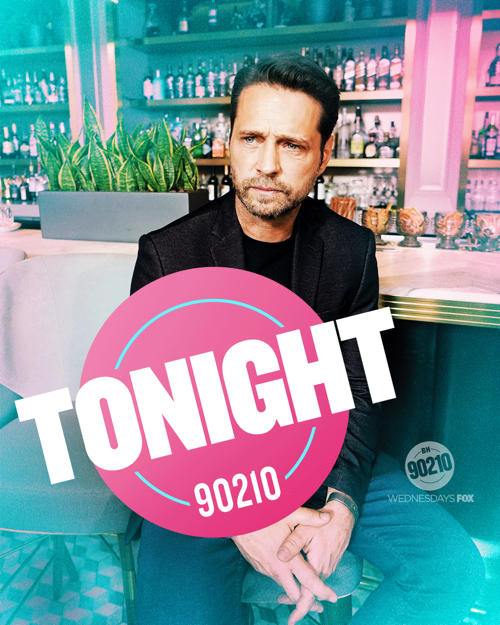 Tonight on FOX the highly anticipated reboot of Beverly Hills 90210, BB90201 airs with an all-new Wednesday, September 11, 2019, episode and we have you BB90210 recap below.  On tonight’s BB90210 season 1 episode 6 finale as per the FOX synopsis, “In the Season 1 finale, the cast celebrates the wrap of the pilot; and the looming news of a pick-up from FOX keeps them all on edge.

Ian realizes his relationship with Anna might be a little too casual, Jennie thinks Wyatt might be in too deep, Tori gets frustrated with Nate, and Shay drops a major bombshell on Brian. Meanwhile, Jason and Camille come to a realization about their marriage, Gabrielle introduces her husband to Christine, and Shannen stresses over the future.”

So make sure to visit Celeb Dirty Laundry for our BB90210 recap between 9 PM and 10 PM ET.  While you wait for our recap make sure to check out all our television recaps, videos, news, spoilers & more, right here!

The cast is having cocktails and can’t wait to see everything come together. Christine comes in and says now they just have to wait to see if they get picked up. Tori can’t believe that being picked up is even an issue. Gabrielle says don’t spend the money just yet, but Tori says hers was confiscated for back taxes, so it’s too late. Jen asks if Nate is going to get a job, or what.

Jen asks Gabrielle what is going on with Chris, she says she is not going to throw away thirty years of marriage for new discoveries. Gabrielle looks over at Christine just then, and Jen and Tori finally clue into exactly what the new discovery is.

Jen is with her daughter, who is not happy about her one line. Jen tells her that she should be happy regardless, it is the start of her being an actress.

Brian then goes to speak to Ian and asks where Anna is, he says she doesn’t want to date. Ian says he is ready for a family, he likes Anna and wishes she would let him get to know her.

Shannen is talking to Jen’s daughter, she tells her that it is not her mom’s fault that she had one line, they have all had to pay their dues.

Tori and Dean are home, the power went out. She asks him if he paid the bill, he says he doesn’t know. A baby starts crying, Tori goes upstairs and is annoyed with Dean.

The next day, Tori and Jen are together and have still not found out if the show has been picked up. Jen says she only wants to do a pilot, imagine having to do a whole show and being directed by Jason. Tori laughs and Jen and tells her that she loves when she pretends to be put off by Jason. Jen tells her not to do that, see something that is not there, Wyatt and she are fine.

Brian is at home, his wife tells him that Zach is not his son, she had her investigator do a DNA test. He can’t believe that she went behind his back and collected evidence. She says she is protecting their family. He is furious and tells her that she just couldn’t let well enough alone.

Tori calls Christine to check-in, she tells her that the Peach Pit pop up is sold out. Christine says she just doesn’t have any information yet but audiences seem to love them. Tori wants to see the reports, Christine refuses.

Ian is with Anna, he tells her that he doesn’t like this whole any strings attached thing. Anna says that this is all that she can do right now, and if she were to date someone, it probably wouldn’t be an actor. She kisses him.

Tori just got home with groceries and the house is a mess, she says out loud, “no help.” Tori had Christine’s assistant text them the report results, she sends them to Jen who then forwards them to Ian, Gabrielle, Brian, Jas, and Shannen.

They read the report and they are all spiraling. Christine walks in and tells Tori, nice tricking her assistant. What they all should be doing right now is creating a buzz so their show gets picked up.

Tori and Brian talk, she tells him the waiting game is so stressful. Brian tells her that his wife doesn’t appreciate him enough, she says she feels the same way. They are at the Peach Pit signing autographs and taking photos. Shannen walks in, she has blood on her, says it is was it and run. A car hit a possum, she saved it. Jen’s daughter tells Shannen that she is so amazing. Zach shows up, he asks Brian why he lied to him. Zach says it’s the truth, Brian says no, his wife did DNA and those results don’t lie. Zach says it is what his mom told him. Dean shows up, Tori is happy and then he says that he is dropping their son off with her.

Christine tells the cast that three shows got picked up by Fox and it doesn’t look good.

Brian’s wife tries to make peace, he tells her that she just can’t back away from anything. She tells him that she is tired of this and walks away.

Jason is away on vacation, his wife tells him it is not working and he is never going to get over that the child is not his. She says they have drifted back and forth, up and down their whole marriage and maybe they shouldn’t have to anymore. She tells him that she loves him and still wants to be his friend and publicist.

Brian tells Shannen that he is still upset with his wife and doesn’t know what to do, and he is having a hard time wrapping his head around the fact that Zach is not his. Shannen tells him to do what is in his heart.

Jen’s husband shows her that he got a tattoo, JG. He tattooed her initials on his chest. Jen gets up and says she will be right back. Jen goes to grab a glass of wine and tells Gabrielle that Wyatt got a tattoo.

All of a sudden, the cast find out that they have been picked up. Everyone makes a toast and tells Tori, way to go.

The cast head to New York and everyone has to get ready for the kick-off party.

Brian sees Zach show up, his wife says she wishes he didn’t invite him. Brian says he did before she did her investigation. Jen is with her daughter who asks her why Shannen annoys her so much, Jen says that is not the case. Brian talks to Zach and tells him that he doesn’t care about the test results. He has a real father out there and he is going to find him, but until then, he is there for him. Zach says thanks. Dean tells Tori that he is very proud of her and he is jealous that she is on this new career venture. He says he was a hockey player, then a reality star and now what is he supposed to do. Tori tells him that it is supposed to be we, not her and him. Jason tells Brian that he heard about Zach, Brian shows him the photo of Zach’s mom and he remembers her.

Ian hooks up with Denise Richards who he met in the lobby.

Gabrielle sits down with her husband and says that the women he introduced him to, Christine – she doesn’t have time to finish her sentence, he guesses that she slept with her.

Jason sits down with Jen, he tells her that Camille and he are not going to work. Jen says that she is sorry. Jason asks where the bodyguard is, Jen, says that didn’t work either. Jason says that she is a lot of work, she smiles and agrees.

Denise and Ian are back at the party and Anna walk up, Denise tells him that Anna is her daughter.

Brian and Tori talk, they agree that sometimes they think they should have married someone that was a better fit.

Christine announces to the cast that they have to reshoot the pilot, an entirely new guest cast – meaning no job for Jen’s daughter and the network has no money so they are going to be shooting in Canada. And, they can’t afford to bring all seven of them back.