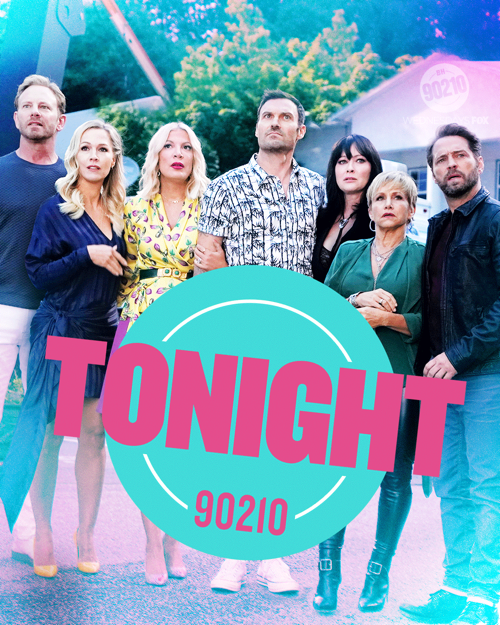 Tonight on FOX the highly anticipated reboot of Beverly Hills 90210, BB90201 airs with an all-new Wednesday, August 28, 2019, episode and we have you BB90210 recap below.  On tonight’s BB90210 season 1 episode 4 as per the FOX synopsis, “The fan reaction from the release of the first cast photo has the gang riding high, until the table read serves up major disappointment.

The cast bands together to try to rewrite the script, but can’t come to an agreement on storylines. Meanwhile, Shannen questions her decision to join the reboot, Jennie lets Kyler (guest star Karis Cameron) audition for a role and Brian learns some shocking information about Zach.”

So make sure to visit Celeb Dirty Laundry for our BB90210 recap between 9 PM and 10 PM ET.  While you wait for our recap make sure to check out all our television recaps, videos, news, spoilers & more, right here!

Andrew arrives at the Peach Pit and finds Tori, Brenda, and Jenny in a booth; they tell her she doesn’t belong. All of a sudden, Andrea is holding on to a jigsaw saying, “you said you liked me,” and she wakes up. It was a nightmare.

Christine is sitting with Andrea at a restaurant and tells her that putting the script together has been a nightmare. Andrea asks if they can stop talking about work. Then she asks her what her dream date would be and she is so nervous that she drops her drink. Christine tells her that she misunderstood, this is a business meeting.

Brian is looking at social media with his wife when she sees that someone leaked her songs and is trashing it. Brian asks who could have leaked it, it could only be someone in the house. Zach opens the car door and overhears, he tells them that maybe they should question the stylist, Joanne, she was in the studio late the evening before.

Jennie is making breakfast, her daughter is upset because on social media they are saying that Jennie Garth’s daughter might guest star, they don’t even know her name. Jennie’s bodyguard tells her that he is being reassigned, she doesn’t look thrilled.

Tori and Jennie are now at the studio talking, girls come in to audition for the guest part; one is Jennie’s daughter. The other girls were really good, Jennie tells Tori she already gave the role to her daughter.

Jennie is alone with her daughter, she tells her that another girl fit the part better than they expected so she might be better as Donna’s daughter. Her daughter is thrilled. They walk up to their car and find a steak knife stabbed in the tire just as Jason walks up.

Ian walks in and Anna is there, he asks her if she is there to gloat, she says no. Ian apologizes for getting off on the wrong foot, but if she dresses him like a homeless bum the fans are going to revolt. Anna tells him that he really is full of himself and she finds his comments offensive. Brian walks in and tells that that writer loves him.

Brian’s wife calls, she tells him that she thinks it is Zach who did it – he is the only that is new and all of a sudden her songs are leaked.

It is the first 90210 table meeting, Jennie says she can’t believe that they are still dealing with a stalker. Christina walks in and brings a lot of people in with her. The cast begins reading the script, they are all not too pleased that they read it cold. Brian asks if it is a comedy or a drama. Jennie says it makes her want to slit her wrists. Kyler is upset that her part is only one line three quarters into the episode and leaves the room. Ian tells everyone that there is potential. Christina tells them that they tape in two days so they better submit their tweaks.

Wyatt, Kyler, Jennie, and Jason are in an elevator heading to the launch party. Everyone is sitting at a table telling Anna what they want to change and she is not receptive to their comments. Christina walks up and tells them that they have alienated their writer and they are going to be stuck with their scripts. Christina tells them that taping starts tomorrow and if they are not there they are going to be fired.

Ian bumps into Anna outside the room and tells her that they are going to write it themselves, and she is letting her emotions overpower her intelligence.

Back to the table, everyone can’t agree on the script. Andrea gets frustrated and walks off. Tori’s husband is there, he tells her that the sitter is getting antsy and he is going home.

At the table, they cut 17 scenes and wrote a half a page. Andrea comes back in and apologizes that she was acting controlling. Ian is taping everything, Anna is in his car and she is watching it. Shannon walks in, everyone hugs her and says hello. Jennie tells Shannon that there is a crazy stalker on the loose. Brian says the network already threatened to sue them. Shannon says she can’t do this, turns around and leaves.

The women find Shannon in a room meditating. Shannon tells them there was a lot of weird energy and she is in a place in her life where she is seeking positive experiences, and she thinks she needs to think a little more about this. Jennie asks how long she needs and Shannon says you really can’t rush the universe.

Ian joins Anna in the car and she thanks him for the inspiration. Anna asks why he is helping her, he says because he likes her ambition and he is trying this new thing, not to make it all about him.

Kyler admits to Jennie that she slashed her tire because she is so happy with Wyatt and if she is not in any danger, he is going to leave. Jennie tells her that she can’t believe she did that.

Tori deleted all the sex scenes with Brian, he asks her if she ever wants to have sex with him. Tori’s husband is back, he bumped into Brian’s wife and they started talking. Tori is thrilled that they connected.

The women go to see Shannon and tell her the sacrifices that they have made for her and it is not fair that she is being paid twice of what everyone else is being paid. Shannon reminds them about all the things they got because of their fame on the show, then she says they need a new script.

Andrea sits down with Christina and tells her that she hates how hard this is on everyone. Christina says she is sorry about the weirdness earlier, about the date. Andrea says it is unchartered territory for her and she was scared. Christina tells her that it should be fun and exciting. Christina leans in for a kiss, but Andrea can’t.

The cast is all sitting together when Shannon walks in and they all look at her strange, she knows Tori told them. Shannon says the money is really needed, it is 100% going to orphans and if their happiness means more than those children getting off the street, then she will cut her salary. Anna walks in and asks how the re-write is going – then she tells them she has a re-write. Everyone sits down to read it, Anna tells them to please hold their comments to the end. Everyone loves it! Jason opens the bubbly to celebrate.

Brian gets home and his wife says she hired a private investigator, Joanne did it, she took a bribe. But what is worst, the investigator looked into Zach, he has a wall of fame made up of 90210 memorabilia and Brian’s wallet on his desk. Brian is shocked!

Jennie tells her bodyguard that it was her daughter who slashed the tire, he says he already knew. She asks why he didn’t say anything, he said because he was happy to stick around – but he can’t get involved with a client. Jennie says fine, she will make sure he is re-assigned.

Andrea goes over to see Christina, sits down and kisses her.

Brian is in Zach’s room and asks him what his plan was. Zach says he just wanted to get to know him better, he is his son.

The next morning, Anna thanks Ian and tells him that she was wrong about him. Jennie tells Tori that she has a date with Wyatt. Tori tells Jennie that she is starting to have feelings for Brian again. Andrea is with Jason and says she is sorry for not going home last night.

The cast are all together heading towards the set when they all see written on the set door, “stop acting like I’m not even here.” All of sudden, the doors open and the inside is on fire.