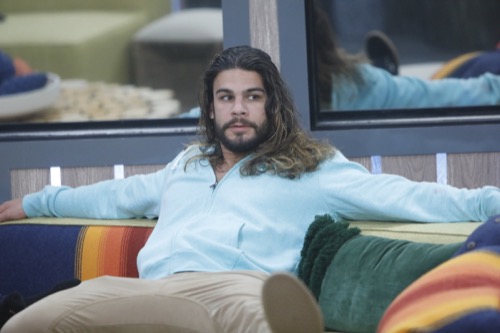 Tonight on CBS Big Brother 21 airs with an all-new Wednesday, July 7, 2019, episode and we have your Big Brother 21 recap below! On tonight’s Big Brother season 21 episode 6 as per the CBS synopsis, “Tonight on BB21 Jack the HoH decides who his two nominations for eviction will be.”

Camp Comeback caught everyone by surprise. Most of these contestants had voted the David and Ovi out because they thought they would never have to see the pair again and so this latest twist in the game has left plenty of them wrong-footed. Michie realized he sent both men home. He also figured they would probably still mad at him and so he tried making overtures. He went to David first. He approached David like a friend and he told him he hadn’t been worried about David’s elimination. In fact, Michie claimed he always knew David would come back and so he tried to play David for the fool. Like David wouldn’t have figured out that no one knew about Camp Comeback.

Please! David knew there hadn’t been any guarantee in him coming back and so Michie claiming otherwise was pure crap. Michie could even see for himself that he hadn’t convinced David and so he tried again with Ovi. Ovi had wanted an alliance with Michie and Jack and both guys betrayed Ovi. Ovi was voted out unanimously. He knows that no one voted for him to stay and so he came up with his own plan. Ovi was going to make everyone believe he was still willing to form an alliance with them and then, at the last minute, he was going to turn on all of them. Ovi was now playing to win and so he allowed Michie to believe that all was forgiven.

Michie was so convinced that he went back to Jack and said that they have Ovi. Michie assured Jack and so Jack began to believe the lie as well. They both now wanted Ovi back in the game because they think they can use him and that was never going to be an option. Ovi wanted to double-check what he put together and he went to Nicole about whether the guys had been pushed into voting him out. Nicole was Ovi’s friend (despite the elimination) and she told Ovi that the guys hadn’t hesitated. They were always going to vote Ovi out and so now Ovi knows for sure that they can’t be trusted.

The only one that still believes they can win over David is Kathryn. Kathryn went to him and said “hey, I’m not a part of any alliance either”, but David told her that only means that the others are going to be voting her out next. Kathryn thought he was joking and she later tried to tell him that he was too pessimistic. She doesn’t want to say the alliances were going to come for her or each other and so that made regretfully naïve. Kathryn has been paranoid about whether or not the others were conspiring against her and it turns out they were. None of the others could put up with her paranoia any longer.

Before any of the contestants could continue playing backdoor politics, they all heard the announcement for a new Wackitivity. Several contestants went into a booth and one by one they were all called out to play a matching game with snakes. The contestants had to put snakes of the same color all in one box and some of these snakes were vicious. There was one that bit its fellow snake and so, of course, some were too scared to rush the process. There was also one contestant who tried naming the snake to help him not be afraid of them anymore and all the naming process did was slow him down.

Patience did not win the round this time. The winner of this challenge was actually Jack and that’s because he was quick on his feet when it came to snakes. His panic turned into his gift and now he has power. He has the power of Chaos. He can use it until they were six contestants left and he forces the HOH to put up two different people for elimination. It was a great power and Jack could have bragged about it. Except he didn’t. He decided to secretly hold onto his advantage and he didn’t even tell Michie about it. Michie was supposedly his closest friend in the game and that friendship meant nothing when it came to covering himself in the game.

Not to say that Michie was any better. When he wasn’t annoying the contestants from Camo Comeback, he was weighing his options with both Holly and Kathryn. Kathryn and Michie had hooked up and they sort of formed friends with benefits relationship. It was working for them when Michie suddenly changed his mind. He said in his confessional that he finds Kat annoying. They were good for a while and once he realized she offers up no alliance or anything he might need in the game – that’s when he found her annoying. Michie was now considering Holly because she was at least in his alliance and any relationship between them would stop her from voting him out.

Michie later went to Kathryn and told her that there could be nothing between them because he has to play the game with his head rather than his heart. He did a whole song and dance about how they couldn’t even be friends because it might paint a target on their backs. Michie upset Kat and there was nothing she could do about it. She also didn’t understand why they couldn’t remain friends and so now Kathryn has no one in her corner. She was a lone wolf and, while there was the talk of an all-women alliance, no one invited. The alliance was a brainchild of Jessica and Isabella. They wanted a four-women alliance with Kemi and Nicole and they said they wanted to be the final four left standing.

Meanwhile, Bella went from her meeting of the Black Widows directly to Jack. Jack and the Gr8ful alliance was the one currently in power and so Bella backstabbed her friends in order to stick around longer. She also went out of her way to paint the Black Widows alliance as Jess’s brainchild and so Jack chose to save his own alliance at the cost of the women.