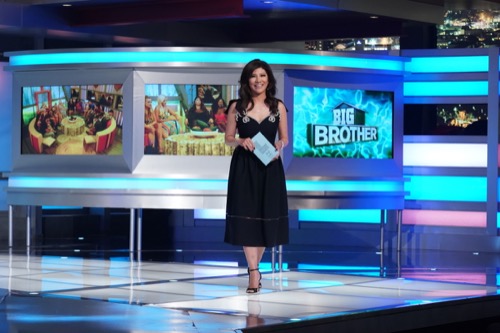 Tonight on CBS Big Brother 21 airs with an all-new Wednesday, July 14, 2019, episode and we have your Big Brother 21 recap below! On tonight’s Big Brother season 21 episode 9 as per the CBS synopsis, “Tonight on BB21 the HoH will nominate two people for elimination.”

During her eviction speech, Kemi called out Bella and Nick, she said they are playing both sides of the house. During Jack’s reign as HOH, Nick and Bella were on the ousts but since Nick has HOH, Gr8ful is strong for another week. Jessica is thrilled that she got a 10 10 1 vote, but Nick winning HOH is a worst case scenario. Kemi wants to come back in the house and shake it up.

Cliff and Nicole are wondering who gave the one vote to keep Kemi in the house. Nicole is not feeling safe, she thinks it is going to be pinned on her, little does she know that Miche did it.

All everyone can talk about is this rogue vote. Miche did it on person to stir the pot. Miche is alone with Nick, he pins it on Nicole. Nicke tells Miche he was thinking of putting Cliff and Jessica, but maybe he will put Nicole up instead. Miche is working overtime to make Nick think it was Nicole.

Bella thinks she has been nothing but a friend to Kemi and didn’t deserve what she said in her eviction speech. Kemi is called to the diary room. Kemi and Bella get into a heated argument, Kemi gets into Bella’s face, Bella tells her to more and touches her arm to tell her to move and Kemi tells her not to touch her.

MIche tells Jack that he voted to keep Kemi, tells him not to tell anyone, it was simply game play. Jack tells him it was brilliant and they both laugh.

Nicole is with Miche and Analyse, she tells them that she can’t believe this rogue vote is going to get pinned on her. Miche thinks it sucks, but this is a game.

Bella is alone with Sam and Nick, she tells them she thinks the rogue vote was Miche; both the guys agree and feel like Miche is really paranoid and keeps bringing up Nicole’s name.

Nick really likes Nicole, he really bonded with her and doesn’t think it his best move to put her on the block. He makes a promise to her that he won’t put her up. Nicole feels better now that Nick spoke to her, but she knows the game, and she won’t feel safe until after nominations.

Horns sound off, it is time for the Panic Whaktivity competition; Analyse, Nick, Christie, and Jessica signed up for the last competition.

This competition involves thousands of Madagascar hissing cockroaches. Underneath them is the legendary elder stone with a secret message from the Big Brother elders, if followed this message will guarantee their victory in the Big Brother game. They will have to move around the cockroaches in order to figure out the secret message. When they think they know the message, they have to spell it out with letter tiles. When they believe they have the right message they have to hit their bell. The houseguest who finishes and completes the correct message wins the power.

Christie finishes the game quickly and says that she is so upset with herself that she took so long! All of the players are waiting to get results. Christie won with a time of and 41 seconds. Christie is thrilled, she is called to the diary room and given her power. She has the panic power, she has the opportunity to turn the VETO into a diamond veto, where the person who uses the VETO can name the replacement instead of the HOH. Christie says she is not telling a soul, maybe just Tommy. She tells him and he is very happy for her. Jack comes in the room, he talks to her about his power. Tommy is thrilled, all his friends have won powers and this will help his game.

Nicole is talking to Kemi and tells her she is starting to understand the dynamics; Jack, Sis, Michie, Holly, Nick, and Bella, they are all together and picking everyone else off. Kemi wants Nicole to know the truth. Bella heard Cliff talking to the camera about her alliance with Cliff and Ovi called Fellowship of the Zing. Nicole is scared and needs to give her alliance a heads up. Nicole goes to speak to Cliff, tells him that Christie was listening to him talk to the camera. Cliff says he didn’t realize that would happen and didn’t think someone would listen in.

Cliff goes to see Nick, tells him that if there was a way he could use him, he doesn’t want to be a pawn, but he is there for him. Cliff wants to work with Nick and Bella, tells him nothing has changed. Nick is thrilled, he tells him that he wants to put Jessica up.

Kemi is called to the diary room to get on her Camp Comeback uniform. She comes out of the room and falls, hilarious.

Sam tells Nick and Bella that they are on the bottom of the majority, Jack would be a great target, Miche would be even better. He says that Miche, Holly, Jack, and Sis are all together. Nick knows it would be great to make a big move, but not with Camp Comeback.

Nick and Bella are talking to Nicole and ask her how Kemi said that they were playing both sides. Nicole tells them that Miche, Holly, Jack, and Sis were targeting them this week. Bella’s mind is racing, could they really have not seen that this week. Nick knows that when it comes to Gr8ful, they are going to have to draw the line somewhere.

Time for the Nomination Ceremony. Nick nominates Cliff and Jessica. He says he loves them both and it is not personal.