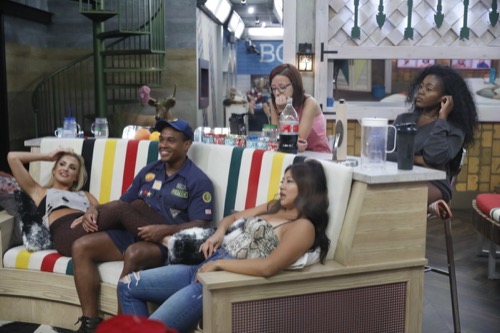 Tonight on CBS Big Brother 21 airs with an all-new Wednesday, July 17, 2019, episode and we have your Big Brother 21 recap below! On tonight’s Big Brother season 21 episode 11 as per the CBS synopsis, “Tonight on BB21 its the live eviction and either Cliff or Nicole will be going home.  We will also have the final Camp Comeback.”

Tonight the houseguests will vote live to send either Cliff or Nicole to Camp Comeback. Who will the houseguests vote out tonight? Julie announces that tonight there will also be the night that the people in Camp Comeback to battle it out to get back in the game. Only one person will return to the house and get a second chance at winning a half-million dollars.

Nicole tried to campaign, but she knows that she is going home. Nicole is sad, if she stays, Cliff is gone, and she will have nobody in the house. Meanwhile, Cliff is happy that Nick told him he is safe because he just doesn’t want to campaign against Nicole.

Meanwhile, Christie is worried that her paranoid episode puts her in jeopardy with Nick and Bella, so she tells them about her Diamond POV. Nick is stoked, this is good for his game.

Miche tells Jack that what he doesn’t like about Nick is that he always tells them what they want to hear, and he doesn’t believe it. In fact, they would have taken a shot at Nick and Bella if Nick didn’t win HOH.

Christie tells Holly and Analyse that she is not voting out Nicole, she is voting out Cliff. Then Christie speaks to Tommy and Jack, she reminds them that Cliff said that he was working with Ovi, she is not going to vote out Nicole because it is not good for her game. Christie thinks Cliff is so much more dangerous than Nicole. And, it is very important that they keep their information about flipping the vote to themselves because loose lips sink ships.

In Camp Comeback, David has been trying his best all week to grow his relationships in the house and if he gets back in the game, Miche is his first target. We look back at poor Ovi getting rejected over and over again in the house, it is honestly really sad the way the houseguests treat him.

Kemi thinks Camp Comeback is the worst, she can’t compete in anything and has to hang out with people she cannot stand. Kemi thinks Jack has an obsession with hating her. The main reason why Kemi was to come back to the house is to vote out Jack.

Time for the Comeback competition. David, Ovi, Kemi and Cliff faceoff in their most important completion of the summer. This competition is called, “Path To Redemption.” On Julie’s go, they will roll balls one at a time down a path in an attempt to deposit them into their reciprocal. The first person to sink six balls will win. If nobody, sinks six balls in three minutes, the person who sinks the most balls in that time will win. Cliff wins the completion and is officially back in the game. David, Ovi, and Kemi are officially out of the Big Brother house and headed home.

Julie is seated with Kemi, David, and Ovi; the person taking it the hardest is David. David says that he wanted the game to be different, he wanted to go further. Ovi says that he felt ostracized in Camp Comeback; he understands that everyone was there to play a game, but he felt like he couldn’t play his game. Kemi says that she was extremely surprised that Nicole is still I the house, she would have hated to compete against her. Julie tells David that he has figured this game out. David says that he knew the house was going to be split, but not Nicole staying in the house. David and Ovi are rooting for Cliff to win, Kemi is rooting for Sam.