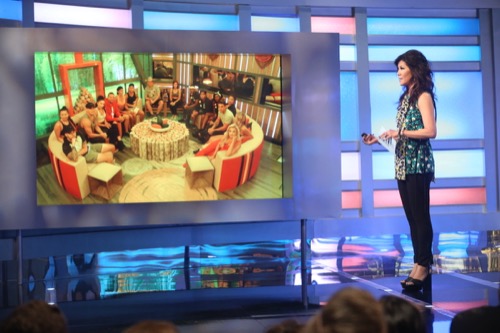 Tonight on CBS Big Brother 21 airs with an all-new Wednesday, July 21, 2019, episode and we have your Big Brother 21 recap below! On tonight’s Big Brother season 21 episode 12 as per the CBS synopsis, “Tonight on BB21 a new Head Of Household is crowned and then the new HoH will nominate two houseguests for eviction.”

Christie knows that her alliance needs to smooth things over with Nick and Bella. They all gather in a room and try to talk themselves out of the crap that they are in.  Nicole, on the other hand, was 100% convinced that she was going home and she is still in the house. Jackson tells her that he was the one responsible for keeping her in the house and now she has to show her loyalty for being saved.

Jackson knows that it is time to do some damage control with Cliff. He tells Cliff that he can trust him and Holly. They can try to sell Cliff, but he is not buying it.

Back to Nick, Jackson and the alliance are trying to tell him that it wasn’t a planned thing, it just happened. Bella says they were blindsided, they were all fake, the alliance means nothing and she wants nothing to do with unde9able. Jack tells Bella that she has done everything to break down the alliance and get him voted out, he storms out of the room. Cliff hopes he wins HOH and cracks the house wide open.

Time to crown a new HOH, this competition is called Patch Perfect. The houseguests will be answering a serious of questions and have to choose the correct patch. The houseguests are ready and eager to play. Bella feels sick to her stomach, if she doesn’t win, her face is going to be on the nominations board. Cliff knows that it is do or die, he just got back into the house and cannot trust anyone. A fire has been lit underneath Nicole, she is here to win. Tommy wants one of the six-shooters to win, so they can control the house. It comes down to Cliff and Jack, who will be the next HOH. Cliff won HOH, he doesn’t go down easy, there is a new sheriff in town!

Nick is happy that Cliff won HOH, he gives him the key and Cliff tells him that he is safe. This is a huge wrench in the game for Jack. Cliff goes in the pantry and does a victory dance.

Nick and Bella are talking, Nick wants to get rid of Jack, Bella wants to get rid of Christie. Bella tells Nick it is really hard because she cannot fake how she feels about everyone in the house. Cliff goes to speak to Nicole and tells her that she is obviously safe this week, she is thrilled and congratulates him. Jackson knows that Cliff winning HOH is the worst-case scenario. His plan is to go up as a pawn and force Christie to use her power. He goes to speak to Christie and asks her if he goes up as a pawn, would she use it on him if he goes on the block with Jack. Christie thinks it is brilliant, then they get to choose the replacement nominee.

Cliff is sitting with Nicole, Jessica, and Kat; he tells them that he is not going to let anyone pressure him into making nominations that they want. Nicole likes working with this four, but she doesn’t know Jessica or Kat well, so she is unsure. Cliff doesn’t trust any of the women, but he needs some of the houseguests on his side if he is going to flip the house upside down.

Jackson goes in to see Cliff and asks him about Nick and Bella, what he thinks about them. Cliff says he is not sure he trusts Bella. Jackson says they could get rid of Nick or Bella and no blood will be on Cliff’s hands. The plan is Jackson goes up as a pawn and it would be mutually beneficial. But in the end, Jackson’s only goal is to save the six-shooters. Jackson goes to get Christie. She starts by congratulating Cliff. She tells him about her power, the Diamond POV, the big one. This is a game-changer for Cliff, now he really has to think about who he is going to put on the block.

Cliff sits down with Bella, he tells her that things have not changed, he wants to work with her and Nick. Cliff says he doesn’t see a path where he is going to put up her or Nick.

All of a sudden, the people that had to time for Cliff the week before, have lots of time for him now, and he knows it. The only person he wants to establish a friendly relationship with is Christie because he doesn’t want her to use her power.

Time for the Nomination Ceremony. Cliff nominates Jack and Jackson. He calls Jack a competition beast and reminds Jackson that he voted him out early in the game. The VETO is a do or die moment for Jack and Jackson.

Cliff is playing Texas gambler, he is trusting that Christie won’t use her power.