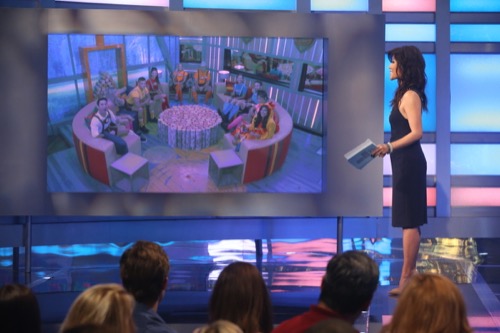 Tonight on CBS Big Brother 21 airs with an all-new Thursday, August 18, 2019, episode and we have your Big Brother 21 recap below! On tonight’s Big Brother season 21 episode 24 as per the CBS synopsis, “Tonight on BB21 we have the end of the HoH endurance competition and a new HoH will be crowned.  Following the crowning the new HoH will reveal his nominations.”

Things picked up with the Head of House competition. The contestants were all fighting for their chance at power and they didn’t need any behind-the-scenes drama to get in the way. Yet, some of it did. There were quite a few of them that remembered what Jess did because she sort of used underhanded tactics to blow up everything. She told Holly that there was a new six-person alliance and she told Analyse what Holly has been saying about her behind her back. It was like she completely forgot they could talk to each other.

Analyze later confronted Holly with what Jess told her. She claims she was never flirting with Michie and also added how nasty it was of Holly to talk behind her back about behavior that wasn’t happening. While Holly had a few things to say as well. She knew that the Six-Shooters got back together and had excluded her and Michie. Both Holly and Jess knew this for a fact. They were just naïve in going after Analyse and Christie. The women both pretended like they didn’t an alliance and they even claimed on loved ones’ lives.

Then the conversation became about Jess. Why would Jess lie about Holly talking behind Analyse’s back? Why would Jess claim there was an alliance? The ladies soon came to the conclusion that they didn’t know what the hell Jess was talking about and that they didn’t know what her game was. They said Jess ruined any chance of winning after she did that, except did she? Jess put everyone on edge and both Holly and Michie knew she was telling the truth. They listened in on the conversations happening around them and they knew that there was an alliance.

They also knew this alliance was gunning for them. The couple overhead their “friends” say that they have no one but each other and so that gave them the added push for the HOH competition. They had to rush down a slippery slope to deliver beer into a giant mug. They couldn’t spill the beer and they had to fill the mug to compacity. Nick had been in the lead at the beginning. He was rushing down the slope so fast that it didn’t seem like no one could catch him and so it was unfortunate that he ran out of steam towards the end.

Michie saw that as an opportunity and he took it. He moved faster, he ditched his pants, and he went on to win HOH. So, what did Michie wanted to do now? He wanted to get rid of Christie and he was willing to do anything to achieve just that. Michie thought that if he put Analyse up as well that people would choose her over Christie and so he told Holly his plan. He thought that she would appreciate because she didn’t like either woman but she told him that they should use the opportunity to also put up Nick.

Holly thought Nick was the bigger threat. She thought he might last until the end and so she wanted to use this chance to try to oust either him or Christie. Only her boyfriend couldn’t see that. He was so focused on getting rid of Christie that he was considering putting her up with a pawn and he talked to Cliff about that last part. Cliff wasn’t told this out of the blue. He approached Michie because he knew he was in an alliance that excluded them and he tried to win back Michie’s friendship. And so Michie told him what he needed to hear.

Michie told Cliff that he might have to use him as a pawn. He didn’t exactly mean it because he was still focusing on Analyse and Christie, so it was a good thing that Christie approached him. She was just like Cliff. She was trying to win back Michie’s friendship by approaching him and she told him that it wasn’t really an alliance. She said no one shook hands or came up with a name for it. She tried to claim that it was simply an agreement. Christie explained how someone else brought it to her along with the idea of getting rid of Michie.

Not that Michie believed any of it. He knew what he heard and so he knew that Christie was gunning for him. He also was questioning if Christie and Tommy knew each other before Big Brother because Christie ran her mouth in front of everyone. She told them how close she was to Tommy’s house and how many exits it would take to get to his house. Like, even, Tommy was upset with her. Christie was practically ruining their game in front of him and so he tried to contain it. He tried to laugh it off like it was one big joke and people soon believed him because of his personality.

Later, Analyse tried going to Michie as well. She told him that it was Nick that suggested Cliff and that he had personally approached Cliff to cement the deal. And with Analyse in his ear, Michie soon saw Nick as a rival and he told Holly how he was going to after Christie and Nick because they were both standing between him and winning.

And so something must have changed his mind because he eventually nominated both Christie and Analyse.