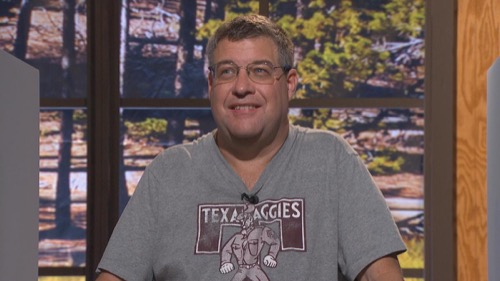 Tonight on CBS Big Brother 21 airs with an all-new Thursday, September 11, 2019, episode and we have your Big Brother 21 recap below! On tonight’s Big Brother season 21 episode 34 “PoV and PoV Ceremony,” as per the CBS synopsis, “Tonight on BB we have the PoV competition.  With both Tommy and Cliff on the block, they are going to be fighting to win.  Following the competition, there will be the PoV ceremony and we will see if the winner uses his/her power.

Jackson nominated Cliff and Tommy, Cliff is just a pawn, but the Veto will determine everything. Tommy says it is hard on his ego to be in the house with four people who successfully blindsided him. It is lonely, clear the way they are hanging out with each other, and it is hard living in fear. He is going to fight to the very end, give them hell.

Tommy is talking to Holly, he tells her that he is the underdog and he is going to do his best. Jackson walks in and they talk about Christie. Holly asks if they think Christie believes here own lies. Holly tells Tommy that she doesn’t fault him for being loyal and sticking beside her. Jackson tells Tommy that he was not wrong about Nick, but he may have been wrong about Christie – she went against her own word over and over again, her word meant nothing. Tommy is having a hard time hearing them talk about Christie, and he wants them to know why he was aligned with her to get them on his side.

He tells them that he knew Christie before coming into the house, her ex-girlfriend is in his family and he didn’t know about her being in the game until he got there. He goes on to say that she knows his own family and its been hard, he throws in a few tears for good measure. Jackson has a whirlwind of emotions going on in his head and can’t believe that Tommy kept it under wraps for 81 days. Tommy is hoping that Jackson and Holly will trust him now that he told them; he really hopes it doesn’t backfire and make him a target. Jackson needs to make sure Tommy doesn’t win the Veto, this means he has Christie’s vote on jury.

Cliff thinks people have underestimated him from day one because of his age, and he plans to give it 100% when he plays in for the Veto. He is in the bathroom talking to himself, “this muscle on your leg doesn’t hold up, then so be it, you throw up, you throw up, your heart explodes, your heart explores, but you leave it all on the freakin’ field, fight like hell, losing is not an option, demand respect, there is no second place, destroy and conquer, you win.”

Time for the Veto completion, this one is comics. Here is how the game works, house guests receive BB comics, they have to match 16 on one side of the wall, with the other. Some comics are fakes with small mistakes, they need to be careful. The houseguests who match the comics in the shortest amount of time will win the POV.

Time to see how every did; Jackson 15:59, Tommy 14:21, Holly 38:22, Cliff 26:32 and Nicole 10:58. Nicole is the winner of the POV. Cliff says that people underestimated him, and they definitely underestimated Nicole. Jackson is so glad that it is Nicole who won, everything should go according to plan. Tommy says it sucks that it didn’t win, but he is still not giving up.

Jackson tells Nicole that she is so impressive, he is without words. Then it dawns on Jackson, if Nicole uses the POV, there is only one replacement nominee, Holly – they could backdoor them. Jackson tells Holly she doesn’t think it will happen, but on a game level, it makes sense. Cliff and Nicole have a golden opportunity to backdoor Holly and split the showmance. This would be the worst case scenario and he is not so worried that they would do it, but they can do it.

Nicole and Cliff talk and as much as they would like to put Holly on the block, they think that Tommy is a much stronger player and it would make sense to get rid of them. Jackson comes in, Nicole tells him that she is going to use her POV, and no funny business is going to happen; she is taking Cliff off the block. Jackson tells her that she earned it, do as she pleases. Holly walks in and Nicole tells her that she is taking Cliff off the block.

Nicole tells Tommy that Holly is going on the block, so he needs to campaign. Tommy says he is not going to get his hopes up, but thanks. When Tommy lost the Veto he thought he was dead in the water, but not he feels like he has a ray of hope. He reminds Nicole that Jackson is the strongest player in the house.

Nicole goes to speak to Cliff and she wants to show him that keeping Tommy is beneficial for both their games. Nicole tries to show him different synopsis whereby if they get to final three, Holly will take Jackson to final two and vice versa. Cliff is so afraid of making the wrong move, this could cost him a half million dollars.

Time for the Veto meeting, Nicole uses the POV on Cliff. Jackson is forced to name a replacement nominee, and there is only Holly left.