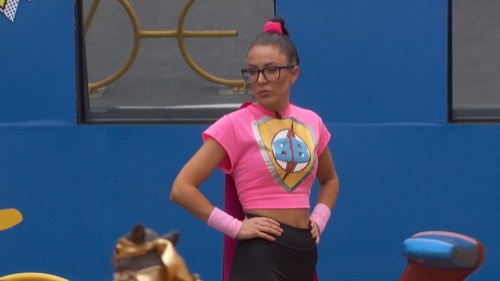 Tonight on CBS Big Brother 21 airs with an all-new Wednesday, September 18, 2019, episode and we have your Big Brother 21 recap below! On tonight’s Big Brother season 21 episode 37 “PoV and PoV Ceremony,” as per the CBS synopsis, “Tonight on Big Brother it is the Pov competition and with Holly and Jackson on the block, they are going to be giving it their all to save themselves.  Once the competition is done we will see the ceremony to see if the PoV is used.”

Tonight, it is the final and most important Veto competition of the summer. It so important for Nicole to win this Veto and get Jackson out. Jackson knows that Nicole and Cliff want to get he and Holly separated, so he knows that it is vital for him to win the Veto. Meanwhile, Holly is still upset that she threw the Veto completion, and now, is she going to keep her word and throw the Veto competition as well? Not only does Cliff have a deal with Jackson, that Jackson is not going to keep, but he now tells Nicole that what they should do is tell Holly that she has their full permission to play for the Veto as long as she takes Cliff to the final three. Nicole believes that Holly will agree to get rid of Jackson and keep Cliff. Nicole and Cliff were playing a good game, but it just went to the dogs. They both think that Holly would screw Jackson, and leaves Holly confused and she thinks they are actually losing their minds.

Cliff takes Jackson aside and wants to make sure they are both on the same page on the agreements they made the day before. Cliff says he loves Nicole, but he would love to be in the final three. Cliff goes on to say that even though they made a final two deal, he cannot take him because he made a promise to Nicole. Jackson doesn’t know what is going on with Cliff, he is making hasty deals and Jackson feels like he is in the twilight zone.

Jackson goes and shares everything with Holly, then she tells him the deal that Nicole and Cliff wanted her to make with them. Jackson tells Holly that if he wins the Veto he is sending Cliff home because he is making deals left and right.

Time for a BB Luxury competition. While the houseguests were in the HOH room, some changes were made in the Big Brother house. In this luxury competition, they will have to figure out how many things have been changed.

On go, the houseguests have to head downstairs and start looking for what has been changed. Once they think they know the total number of changes, they need to head back upstairs, ring the bell and make their one and only guess. The first person who answers correctly will win $10,000.00, if no one answers correctly, the person closest with the fastest time will win.

Ovi is back in the BB house, and he made chocolate chip cookies for everyone. The competition is over Jackson 17, Nicole 16, Holly 17, Cliff 17. The correct answer is 18. Jackson is the winner of $10,000.00, Jackson is ecstatic, but he can’t show it because he doesn’t want to piss off everyone. Nicole thinks it is great that Jackson won, he can take it with him when she gets him out this week.

Its time for the final Veto competition. This season they have been tested physical, mental and skill competitions and this one they will be tested on all three.

In the first game, they will reveal a statement, then they will use an oversized slingshot to launch a ball at a giant game board. Their goal is to knock down the houseguests who do not apply to the statement. Once only the houseguests who apply to the statement are left standing, they need to hit their answer button. If it is correct, they will move on to the next statement. If they are incorrect they will hear a buzzer and have to try again. But, if they knock down the wrong face, they will have to reset that part of the board and start again. There are two parts to the board.

Jackson came on the show to win and he is crying, they are tears of happiness.

Cliff is talking to Nicole and he tells her that it’s ok, he believes that Jackson will keep his word and stick to the final three deal.

We will have to wait to tomorrow night to see if Jackson uses the POV on Holly and sends Cliff home.