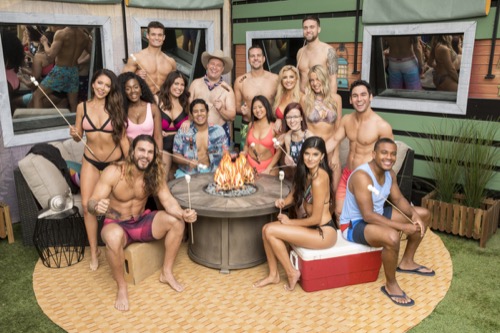 Tonight on CBS Big Brother 2019 premieres with an all-new Tuesday, June 25, 2019, episode and we have your Big Brother recap below! On tonight’s Big Brother season 21 episode 1 premiere as per the CBS synopsis, “The Season 21 premiere of the reality series. Strangers live together in a camera-filled house in hopes of winning $500,000 by being the last one standing after three months of confinement.”

This summer is Camp BB, 16 new houseguests are about to enter the BB House. It is time to get this summer started. Houseguests will immediately face with a game-changing position that will give one houseguest power. There will be twists and turns that nobody has seen before.

We get to see some of the houseguests back at their homes; Jackson is from Nashville, TN and he is a momma’s boy. He has been watching the show with his mother since he was in single digits old. Nicole is a special needs Preschool Teacher; she is single and not ready to mingle, she is really awkward. Tommy is from Staten Island, NY and he is a Broadway star; he doesn’t want anyone to know that he is a BB Super Fan. Kathryn is from Dallas, TX and she was a dancer for the Dallas Mavericks. Ovi is from Oakridge, TN, and a recent college graduate. Kemi is from Brooklyn, NY and she is a reformed mean girl. Holly is from Lander, WY and she is a Sommelier. Jack is from Tampa, FL is a videographer and photographer; he has a black lab that is his everything.

The first eight are on stage with Julie and she chooses the first four to enter the house; Tommy, Jack, Kathryn, and Nicole. Tommy immediately reminds everyone that they should pick their rooms. Tommy is already crushing on Jack. The next four enter the house; Jackson, Ovi, Holly, and Kemi. Kathryn is crushing on Jackson; future showmances are starting to brew from the beginning.

Jackson knows he can be seen as a threat. Jack gets adventurous and finds a ladder, he climbs up and finds a secluded room to relax in that overlooks the bottom of the house.

Time to meet some of the other houseguests; Christie is from Keyport, NJ and she owns a clothing boutique; she recently got out of a long relationship with an older woman. Sam is from Mountain Top, PA, he is a truck driver; he is married with two young boys. Isabella is an intern at UCLA and grew up in a very strict family; she wants to win to show her mother that she can be something other than a doctor. Nick is from Sewell, NJ, he says he is outgoing and obnoxious; he is also a mental health therapist and he is telling nobody what he does for a living.

Jessica is from Chicago, IL and she is a plus-size model. Cliff is from Houston, TX and he is a Petroleum Engineer. Analyse is from Simi Valley, CA, and just graduated from university and a self-proclaimed BB Super Fan. David is from Atlanta, GA, he is a photographer.

The next eight are in front of Julie, she names the first four who will enter the house; Cliff, Isabella, David, and Analyse. Cliff knows that the older guy is always a target, he plans on laying low. That leaves Sam, Nick, Jessica, and Christie; they go in the house.

Tommy recognizes Christie, she dated someone in his family for seven years. Both act like they don’t know each other.

All the houseguests sit in the living room and introduce themselves. The woman are all crushing on Jack.

Juie tells everyone to gather in the living room and officialy welcomes them to Camp BB and she reminds of the BB moto, expect the unexpected. Julie says that for the first time ever, they have to elect a Camp Director; he or she will be safe this week, and could single handedly put their game in jeopardy. In a bit, each one will have to go in the backyeard to vote for the Camp Director, and they can’t vote for themselves. The houseguests talk about if anyone wants to volunteer for the position and both Cliff, Jessica, Jackson, and David offer themselves up. The houseguests scatter and talk about Camp Director. Jessica hasn’t even campaigned and already has the girls and Tommy wanting to vote for her. Jackson needs to ensure his safety, he goes to talk to Jack who he thinks is a strong player. Nicole is already playing both sides, she first said she would choose Nicole and now she is thinking of going back on her word and choosing Jackson. Isabella thought Jessica had the votes, but apparently not, she sees that Jackson has a quite a few numbers as well.

Time for the vote. Its down to Jessica and Jackson, one of the will be Camp Director. The winner is Jackson with ten votes, he is the fist ever Camp Director. Jackson is safe at the first live eviction. As the Camp Director, he must choose four people to send out of the house. The four will battle to come back in and three will win, one will be sent home and see their game come to an end before the first eviction takes place.