Big Brother Spoilers: Did Elena Davies and Mark Jansen Get Back Together?

BY Olivia Marie on May 30, 2019 | Comments: one comment
Related : Big Brother, Spoiler, Television 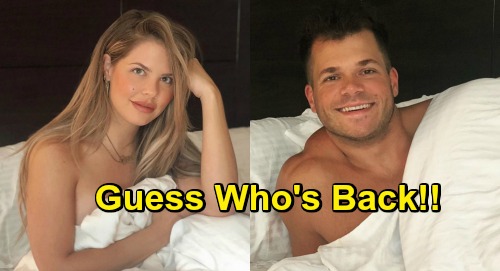 Big Brother spoilers tease that the Season 19 couple Elena Davies and Mark Jansen may have put their differences aside and got back together. It all started after they posted pictures of themselves in the same bed, at the same time from their own Instagram accounts. While the BB fandom is hoping they did get back together, Davies cautions against the fans jumping to conclusions.

Elena admitted that she and Mark have reconnected after their shocking breakup in February. But she added they are not together, at least not officially that is.

“I know rumors are circulating heavily again due to our Instagram posts,” Davies explained. “Unfortunately, I am going to leave you a little bit unsatisfied. … I cannot and absolutely will not speak on behalf of Mark, but what I will say is this. I do love him very, very much still.”

The reality star said that while she loves Mark and she wants to eventually settle down with him, she still has self-growth before she can commit to him.

Another rumor plaguing the former Big Brother 19 showmance is the couple being accused of faking their romance for attention. Davies shut that down by revealing that after their breakup she cried off and on for over three months.

She noted that she appreciates all the love she receives from their fans and she would never consider taking advantage of that. She clearly stated that everything that happened between them was not fabricated in ANY way.

The couple met on the set of Big Brother 19. They dated almost two years before announcing they separated in March. Before their breakup announcement, Elena and Mark lived together in Texas.

Mark Jansen has never wavered in his love for Elena Davies. Even now, after a painful breakup, he would love nothing more than to reconcile. And, Elena has nothing but great things to say about him. She stated again that their time apart is nothing more than a time for her to mature and be ready to be the mature woman Jansen deserves.

Do you think the couple will eventually get back together, officially? Don’t forget to come back to CDL later for more Big Brother spoilers, news, and casting updates!

If you’re reading this, I’m sleeping 💤

Time for this teddy bear to come out of hibernation 🧸🧸