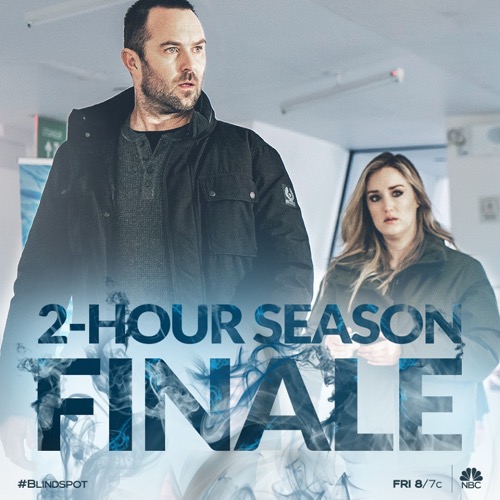 Tonight on NBC Blindspot airs with an all-new Friday, May 31, 2019, episode and we have your Blindspot recap below. On tonight’s Blindspot season 4 episode 22 called “The Gang Gets Gone,” as per the CBS synopsis “The Season 4 finale: the team sets out on an international mission to stop an attack from spreading. Madeline attempts to turn the tables as internal conflict threatens relationships within the team.”

The team raced to the powerplant and they tried to overwrite the code with minutes on the clock like they always do, but this time they lost. They lost and the entire Eastern Seaboard was plunged into darkness. The team didn’t know how to stop the virus and not even Burke was going to tell them. The virus was holding the electricity hostage in return for a ransom. Rich thought they should pay and they couldn’t because the government has the policy of never paying the ransom. So Patterson next came up with an idea. She had seen some of the code and she believes that their old friend Kathy had a hand in writing it. Except no one knows where Kathy is because she still a wanted criminal. And so that’s when Patterson and Rich came clean.

They have seen Kathy. Kathy invited them to her engagement party and they didn’t want to be bad friends and not show up. They didn’t know if Kathy would be in the same location and they couldn’t call her because it would look suspicious that her two cop friends call right after a disaster. Hence they used Domenic. Domenic was killed by the team went they got to the powerplant and so they used his image to make Kathy think her fiancée was alive. And it worked. Kathy stayed on the phone long enough that the team figured out she was in Iceland. The team needed to go to Iceland and so they had to promise Weitz first that there wouldn’t a body count. And only then did he allow them to board the plane.

There is just one problem, though. The team went to Iceland to get rid of the virus and, while they were gone, Nash made his move. He used his new position as Director of National Intelligence to state a case against the team. Nash and Burke claimed that the FBI was behind the attack. They went on to say that the team was behind everything and that they set up HCI Global. They made everyone on the team look guilty and no one was there to speak up for them. Weitz had been too scared to speak and so the others ran roughshod. They were even claiming that the team had fled the country as a way to escape punishment and Nash said that he had been convinced. He demanded that Weitz tell the Iceland minister to arrest the team the second they landed.

Weitz was forced to comply, but thankfully Rich hadn’t trusted anyone and so he had hacked into their camera feed. He saw everything and he went on the run. Rich was hiding in the air ducts when he called Patterson and told her what’s happening. Patterson and the team were all arguing because Reade found out Weller secret and thought the team was compromised. Each member of the team has done something illegal on the FBI’s watch and they were all shouting at each other when they realized they had to escape arrest. They used parachutes and jumped off the plane. Then they reached out to people on the ground that they hoped could help them and it turns out that these people would only lift a finger if they got something from Rich.

Rich’s friend demanded that he hand over all his paintings and so Rich told Reade in a private conversation that he no longer has it, but Reade decided to fake it. Reade put Rich back on speaker and Rich had to agree to the deal. Of course, if he renegades on their deal that gives this guy permission to kill his friends and so they were hoping to save the world before that happened. Patterson, Jane, and Weller went to the computer that Kathy used to take down the virus and what they did only made it worse. They blacked all of London and turned a country’s crisis into a global crisis. They also did it on camera and so Helios was really taking off. Madeline Burke wanted to prove the FBI was corrupt and she has.

Burke also had evidence against Weitz and so Weitz knew without a doubt that she was the corrupt one, but things got worse in Iceland. Patterson returned power and even that was used against them. They were being accused of setting the first in order to be the one to put out and so Patterson needed more time to clear their names. She and the others had to split up. Patterson needed time to work and so the others took a shop hostage. Jane and Weller were using the hostages as cover. Nevermind that this was the exact same situation that Reade used to say that the whole team was compromised and has been ever since Jane came into their lives. Jane and Weller were later arrested for the whole hostage thing, but luckily their friend on the ground knew people.

Ice Cream got them their freedom, but no one had been there to save Rich. Rich was found and he was turned over to Nash. Nash transported Rich to a black site and so he was going to be tortured for information. Weitz felt bad about it and yet he still didn’t do anything. He even lost his job to Madeline Burke. She did all of this because Hoover destroyed her father’s career and she’s wanted to destroy the FBI ever since. Well, she got her revenge. She just destroyed people that stood in her while she was at it and so the team had to make a decision. They realized they couldn’t clear their names without time and so they were going to go on the run. Patterson created fake passports and now they were a team of criminals.

But Burke and Nash approved of a drone strike to kill them and so Jane who was on the first watch had to witness the death of her family… or did they somehow manage to survive?