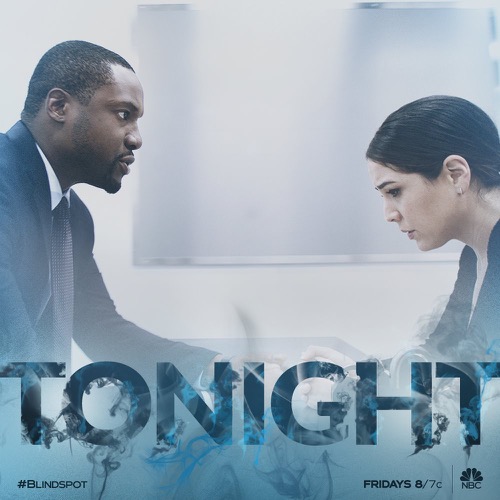 Tonight on NBC Blindspot airs with an all-new Friday, January 18, 2018, episode and we have your Blindspot recap below.  On tonight’s Blindspot season 4 episode 10 called, “The Big Reveal,” as per the NBC synopsis, “Reade confronts Zapata, while the team follows a lead to a potential cure for Jane.”

The team was relieved when results from the final test showed that Jane was her old self again but regaining memories didn’t mean she wasn’t leaving under a cloud. She was still dying from ZIP poisoning. No one has even close to finding a cure for her and so Patterson and Rich were still looking. They thought they could pick where Roman left off. Roman had been suffering from the same thing as his sister and he looked for cures that it was clear he never found. But he came close enough. He found the doctor who created the poison and he believed she could have created as well. There was just one problem with tracking her down! The doctor died two years ago and if she had a cure then she must have taken with her to the grave.

Dr. Nora Lee Roga was a well-respected doctor that died in a car accident with her assistant. In other words, the only two people with direct knowledge of poison itself were dead and so the team looked for who else could have come across the information. The doctor had a son named Clay Roga and her son was living with her as he finished his dissertation. Clary went into the same field as his mother and while he probably heard a thing or two he wasn’t as knowledgeable as the team hoped. They asked him questions and he had no clue what they were talking about because back then he wasn’t paying attention to what his mother was doing. She had her work life and left what she was doing at work. She never brought it home.

The team thought they had lost their only lead, but then Patterson and Rich began to question why Roman created the data cache about someone that was dead. It didn’t make much sense to either of them. They knew that Roman had slowly been losing his mind towards the end and so they kept digging mostly to reassure themselves. They never expected to find out that Dr. Roga was still alive. It turns there was a photo of the good doctor walking around after her supposed death and that gave them hope again. The team investigated whether or not Roga was alive by checking to see if she contacted her only child. They checked the phone records and they did notice an anomaly. They saw that someone from a burner cell was calling Clay every Sunday.

Clay was asked about this and he said no one never answered. They just call and would never answer when he asked them who they were. When the team told him it could have been his mother, he said that they used to go to a diner called Henry’s. He went with his mom every Sunday for dinner there and so he had been happy to learn that his mother was alive. He wasn’t suspicious at all while the team had their questions. They wanted to know why Dr. Roga faked her death. Patterson and Rich traced the phone calls back to one location and they assured Clay who had wanted to come that they would tell his mother he misses her for him. They also told Clay to tell no one that his mother was alive and he sort of broke that promise.

Clay called his fiancée and told her that his mother was alive, but someone had been eavesdropping on the conversation. The people at Kearns Pharmaceuticals were why Roga was in hiding. She worked at the company and tried to tell them that ZIP was too unstable to ever be released. Roga was told that the company would listen to her concerns and stop the drugs from being sold, only they gave her a pat on the head a day behind before her assistant was killed. Roga should have died as well and the one reason she was still alive was that of Roman. Roman helped Roga faked her death and funded her research offsite. He also was the one that put money in a trust for her son and so that proved he was willing to look out for Roga if she found the cure for him.

The FBI found Roga at the cabin that Roman left her in. They told her that they were looking for information on ZIP and they had had to identify themselves before she agreed to tell them anything, but once they did, she told them the whole story with Roman and how she was still waiting to hear from him because she thought she finally developed the cure. The cure just needed to be tested on someone. Roga waiting to give it to Roman and so the team informed her about Roman’s demise. Roman and Roga became very close as they worked together and she was the closest thing he had to a good mother since his parents died. So hearing of his death had been hard for Roga. She was separated from her son and saw Roman as a fill-in.

Only Weller told her that the cure could go towards Roman’s sister and that had been enough for Roga. She took Patterson and Weller to mini-lab out back. Roga was storing was cure along with some pretty rare stems cells in her freezer controlled shed and so she was going to hand it over when people from Kearns Pharmaceuticals found them. They were taking when hitmen began shooting at them and unfortunately several products were knocked over which started a fire. The fire spread to the stem cells and the cure. It destroyed everything, but Roga got alive and she later talked to Jane because she remembered that Roman had found more Stanton Cells. He said that they needed them for someone and Roga believe that someone was Jane.

The doctor needed those cells to create more versions of the cure and so there was still hope of saving Jane.

The team also learned that Zapata was on their side. She was under deep cover with CIA and the only person on her side that knew the full story was Keaton. Keaton was still in his coma and so Zapata asked Reade to trust her one last time. And he showed that he did by releasing her.