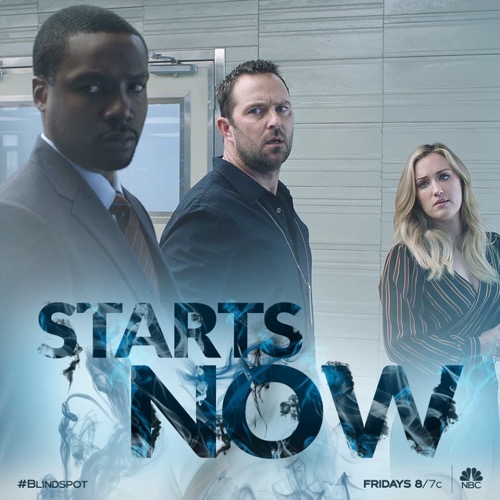 Tonight on NBC Blindspot airs with an all-new Friday, February 1, 2019, episode and we have your Blindspot recap below.  On tonight’s Blindspot season 4 episode 11 called, “Careless Whisper,” as per the NBC synopsis, “An author’s obsession with the team puts them in the cross hairs of a deadly killer.”

Rich was the one that figured out their latest case. He was paying attention when a famous author was killed at home in Long Island and he believed the case was connected to the tattoos. It turns out Winston Pear has been searching for information on Jane and the FBI since she came out of the bag in Time’s Square. The story and the mystery of it had fascinated Winston and so he has a whole wall dedicated to Jane. There were photos as well as news stories that could possibly be linked to her, but nothing else about the crime scene had connected Pear’s murder to the tattoos. The team thought Rich could have made a mistake with this one.

Rich even though it might not be as connected as he thought and so he tried playing Pear’s 911 call to see if he could learn anything from it, but it was Jane that picked up nuisances in the call. She heard Pear over by his clock when he first got into contact with the dispatcher and so she went over there. The others soon joined her and they all noticed that the clock had been opened. They reopened it only to find a manuscript titled “Inked to Death: A Jane Doe Mystery”. Pear had found out more information on the team than mere articles and he kept all of their first names. The author had written about the time the team solved a tattoo to figuring out who the New York Ripper was.

But there was something odd about it because the team couldn’t recall ever investigating such a case. They double-checked their files and they had never found a serial killer in Long Island. It seems that part had come from Pear. Pear believed that there was a serial killer who has killed over thirty people in New York. No one else connected the dots and so Pear wanted to do it for them with his book. His book really was about a serial killer that Pear was going to unearth and unfortunately the killer must have learned what Pear was doing. Pear was murdered at his home and his notebook hadn’t been found.

The team had gotten their hands on the manuscript only to learn that Pear hadn’t finished it. He was keeping the killer’s identity a closely held secret and his publicist didn’t even know it. The guy had wanted Pear’s last work and it hadn’t been finished enough to be printed. Plus, it was evidence. The team truly couldn’t hand over something like that and so they instead looked into Pear’s contacts to find out how he learned about the team. He had friends in law enforcement who told him about the naked girl that came out of a bag and how she was covered in tattoos though he must have gotten the in-depth information on the team from a leaker at the FBI.

Pear had written about Jane’s headaches and things that Patterson would say. He just knew someone that was close to the team though not close enough to matter and so the team thought that they would have to dig for it when all they had to do was continue reading. Pear wrote how the team couldn’t solve the case on their own and that they had to rely on a junior agent named Brianna. There was a Brianna at their office and she cracked under pressure. Brianna admitted that she went to school with Pear’s stepdaughter and that he contacted her out of the blue about what it was like to work in the FBI. He didn’t bring up the team or Jane until much later on.

By then, Brianna had read his books and became a fan. She didn’t think she was hurting anyone by telling Pear about the team’s personalities because she never actually told him about the cases. Pear would have been on his own with that part and that’s why he probably decided to write about the New York Ripper. The Ripper was someone who left behind victims and perfect crime scenes. He knew so well about how the scenes were supposed to look that he had been familiar with or in law enforcement. Pear also wrote that the killer made strategic cuts on the victim and so Patterson and Rich looked into people that matched a certain criterion.

The only one that matched everything was someone named Gerald Savitt. Savitt even has a childhood past for animal cruelty and he used to vacation with his family at their lodge called Falcon Head. Falcon Head had been on one of Pear’s many post-its and so Pear must have believed that Savitt was the killer, but he would have been wrong. Savitt was out of town during several of the murders and so the team decided to take a risk. They brought Brianna in to see if she recognized anything and Brianna noticed that all of the men that partially matched their killer were all men. Pear had a bias he didn’t know about.

Pear saw women as damsels that needed to be rescued or sex objects. He even wrote them just like that and so Patterson decided to look into the women in Savitt’s life. It turns out he has a stepsister who was always around whenever Savitt claims to have injured an animal, but it must have been the sister. Savitt took the blame in order to protect Iris Brikelmyer. She was now with the police and she had dioramas on her social media page that were dead rats arranged in a pose. Iris must have wanted to create dioramas with the people and that’s when she began her reign of terror. She thought Pear would have exposed her and that’s why she then killed him. And funnily enough, Pear hadn’t been close.

Pear thought the killer was a man and for a while he even had the FBI believes the same, but Rich and Jane had gone back to his home to check on Pear’s typewriter for any last clues and so they hadn’t been with their team when they revealed who the killer was. They had been at Pear’s home alone with the killer. Iris was able to subdue Jane and kidnapped. She had planned on killing the FBI Agent as her final act and it turns out Jane still had her muscle memory to fall back. Jane’s ZIP poisoning had taken away her eyesight yet she was still able to fight and put down Iris. And so the team did put an end to the New York Ripper.

Only Jane’s condition was worsening and so she and Weller had to contend with there, but there was one thing everyone asked about. Why wasn’t Zapata in the book? They asked Brianna and Brianna said that Pear thought Zapata was too combustible and self-destructive. The writer likes to give each of his characters a happy ending and he told Brianna that he couldn’t do that with Zapata. Which was funny because Reade was beginning to think the same of the real-life Zapata. She was in deep cover and there was no way out for her.