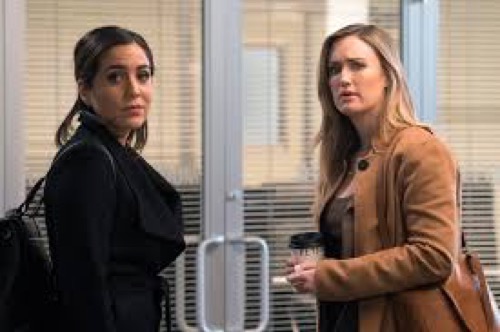 Tonight on NBC Blindspot airs with an all-new Friday, March 08, 2019, episode and we have your Blindspot recap below.  On tonight’s Blindspot season 4 episode 14 called, “An active bomber forces the team to delve into a case from their past.”

Zapata was attacked and robbed in Zurich. She wouldn’t have gotten hurt if she hadn’t gone there alone and for some reason, she was still going rogue. She liked operating outside the traditional limits. Zapata was messed up before she was given a secret mission and her trip to Zurich showed nothing has changed. She still didn’t want to fill in her team and had a hard time answering to anyone much less Reade, but she has to now. Reade wouldn’t have it any other way. He later told Zapata that she has to follow orders and she go all half-cocked on her own. She needed to stay with the team and that everyone will be safer.

Zapata agreed to come to him when she needed to talk, but she was still having a hard time fitting back in with the old team. Their lives had gone on without her and meanwhile, she had been stuck working with Madeline Burke. Burke had rubbed off on her in some senses and that’s something Zapata will never admit. She doesn’t want anyone to know that she was more gray than light nowadays and that’s why she wanted to get Burke’s SD card. It had credible information on how to find Burke because Zapata believes that if she captures the woman that it would somehow make things better what with all she had to do just to catch Burke.

Only she lost the SD card and what little she was able to transfer had gotten corrupted when the SD card was taken out unsafely. So the entire thing had been a wasted trip. Zapata tried not to let that bother her and it did. She was especially bothered because she risked her credibility with her trip. It had both Reade and Weller questioning if she was ready to come back and so the guys were seriously considering sidelining her when they received their next case. There was bomber in Brooklyn who was actually acting a copycat of a woman known as the Williamsburg Bomber, but the newbie claimed that the original Williamsburg Bomber had been framed by the FBI.

The latest bomber also said they were going to keep bombing Williamsburg if the woman that had been sent to jail two years ago wasn’t freed, but the team that had been there at the time had remembered that case and they said that they did everything right. Reade, Zapata, Weller, Rich, and even Stewart had worked the case. It was the first case that Rich had been used as a consultant and he won the job by knowing the first victim. The first victim of the bombings had been a Patio Bandit. This was someone that stole packages off someone else’s front porch and the victim had bragged about it in prison. And so that’s how Rich found enough information to work out a deal with the FBI.

Hirst was Director at the time and she had Rich assist Stewart who was struggling as Patterson’s replacement. Stewart hadn’t known how to access the doorbell camera and so Rich took over. Rich found footage of Lilly Terrace putting a box on her neighbor’s doorstep an hour before it below and that had been the smoking gun. They had shown the video to Lilly and she confessed when she saw it. There had been nothing illegal with what they did because they have legal access to the doorbell camera and so no one knew why this copycat bomber was lashing out, but Patterson checked the video and she said it had been doctored.

It turns out the copycat bomber was right. Lilly had been framed by the FBI because someone doctored the video of when she was making delivery stops and changed the time of day. They made sure it looked like Lilly was there an hour before the bomb blew and she was there on an entirely different day. She made her deliveries after five and the setting sun was behind her, but the doctored video which was supposed to be at five the next morning had failed to take in the shadows on the porch. So she was framed. It was also messily done and so that cleared Rich because there was no way he would have left behind clues. Not even for a consultant job.

It seemed the culprit was the late Stewart. Stewart had even erased backup footage from the cloud and he left behind his signature when he did his little hacking. It was noticeable to Patterson and Rich so they knew who framed Stewart, but what they didn’t know was why. It was a secret that only Director Weitz knew. It had been Weitz that demanded Stewart doctor the footage and erase the real thing. Stewart hadn’t wanted to do it and he had been ordered into it by the Attorney General who just happened to be running for congressman. Weitz had announced they caught the bomber before the FBI could find some genuine proof that it was Lilly and so he dealt with it himself.

When everyone else found out Stewart framed this young woman, they talked about making public and Weitz was the only one that turned it down. He said that it would look bad for the FBI and so he was going to keep covering his tracks no matter what. Weitz had been relieved when the team found their bomber and had him cornered though he demanded that they use the drone program to take down the bomber since it wasn’t safe for the team. Some of them understood and others didn’t. Like Jane and Weller. They both hated the drone program and Weller said that there was something that was nagging him about the copycat.

Weller asked how did the copycat bomber know that Lilly was framed? He said that he could talk to someone that would know and so he went to talk to Hirst. Hirst demanded a few things but in the end she admitted that Weitz had been the one to order Stewart into doing what he did and that Stewart had even come to her. He wanted his direct boss to help him and she dismissed what he said because it didn’t matter if they framed Lilly. She told him that Lilly was guilty either way and that they caught her in time. Hirst told Weller that it had been Weitz all along and so Weller went to confront Weitz.

Weitz was claiming in the media that the copycat bomber committed suicide by blowing himself up and when Weller demanded that the truth come out – Weitz threatened to tell the world about Jane and how she committed treason by breaking out Shepherd.

Weitz said he would keep Jane’s secrets if Weller kept his and so Weller backed down.

And the team received a new mystery because Jane’s mother Shepherd had left behind a key for her, but while they were looking one way, the real copycat bomber was looking and he used Weitz’s secrets to blackmail
the Director of the FBI.