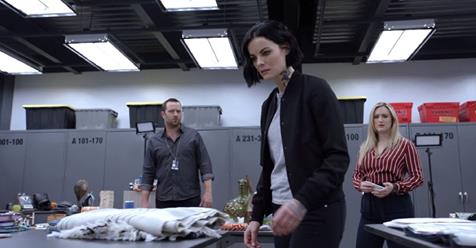 Tonight on NBC Blindspot airs with an all-new Friday, March 15, 2019, episode and we have your Blindspot recap below.  On tonight’s Blindspot season 4 episode 15 called, “Frequently Recurring Struggle for Existence,” as per the CBS synopsis “An active bomber forces the team to delve into a case from their past.”

The team got a tattoo hit. Jane has a tattoo of the god Hermes on her body, but this particular tattoo contains a serial number that belonged a mysterious box and it was recently stolen. The package itself has lifted off a transportation vehicle and the drivers had no idea what it was. It seems the only people that could identify what was stolen was the man behind a weapons company and he wasn’t talking. He was notoriously difficult with authorities and everyone believed him to be carrying out illegal deals on the side. There’s never been an investigation to unearth this information and so it was still speculation by the time this stolen package triggered a tattoo. The team needed to figure out what stolen and they had solved this mystery using what little information was included with the god Hermes.

The first thing Patterson and Rich worked on was what the other symbols meant. They thought they were merely letters arranged in a symbolic sort of way, but once they realized that God was actually Mercury (didn’t name, same god) then they realized the “letters” was using the periodic table. Rich and Patterson used that to their advantage and they determined the tattoo was discussing plutonium. Someone stole the most vital ingredient to a nuclear bomb. Everything else would then come naturally and so the team had to report the stolen plutonium to their boss. Director Weitz didn’t come this time only he still believed a nuke was too much for the team to handle on their own and so he called in an expert.

Special Agent Dave Kirkpatrick was an expert in nuclear weapons and he came in handy with other things as well. Dave went through the personnel files of Silver Mark Industries with Patterson and Rich, but he was the only one that recognized Gertrude Simmons as Greta Smalls. She was an arms dealer and she was most likely going to be making a deal for this plutonium on the dark web. Dave didn’t know how to access it and so that’s when Rich was allowed to shine. He voyeur his way onto the dark web and got to oversee the transaction between Greta and a man named Konstantin Valenov. It turns out Valenov was the one selling the plutonium and Greta was buying it. And so they agreed to meet later at the Caris Hotel.

The team discussed possible means of intercepting the plutonium and their best solution ended up relying on Dave. Dave was familiar with the ins and outs of over forty different kinds of bombs. He was needed to break down the nuclear device they were going to sell to Greta. She was going to think Weller was her buyer and Patterson in the meantime was going to impersonate Greta with Valenov. Valenov met a woman on the wrong floor with all the signs changed and he made a deal with Patterson. Patterson then handed over a device to Dave who disabled it, but he realized that they had to go through the deal with selling the plutonium because he couldn’t do everything he wanted with the shell and so they went through with the deal.

Weller and Jane thought they were going to be meeting just Greta, but Greta brought along a friend. She brought a man named Cameron Gibbs with her and he knew Remi. Remi was recruiting for Sandstorm and she arranged a military betrayal that made it look like Cameron was working with the enemy. He got kicked out of the military, was disowned from his family, and had lost basically everything. Cameron thought the only person that believed in him was Remi and so he never found out what she did. He instead devoted his life to the terrorism she taught him. Cameron now believes that he was doing the mission by continuing to kill innocent people and so it had been odd for Jane to see him again.

Jane now has all of Remi’s memories and she knew what she did to Cameron was wrong. It was why she wanted to take him in alive, but Cameron got away from them with the plutonium and the team had had to track him down. It turns out that he went to an area full of people and was going to kill thousands because he thought Remi was the one that forgot what their higher purpose was. Which was true, in a way! Jane could see now that their mindset was flawed and she told Cameron the truth about what happened in the past because she was hoping that would convince him to turn himself in. Except Cameron was going to go through with the bomb because he wanted revenge and so Weller had been forced to kill him.

The decision still weighed on Jane because it was one thing to know how awful Remi could be, but quite another to get up close with one of her victims.

But the key that Jane received from her mother led to the warehouse that revealed that there was one more soldier loyal to Shepherd still out there.

And also Keaton woke up and he was able to back Zapata’s story.