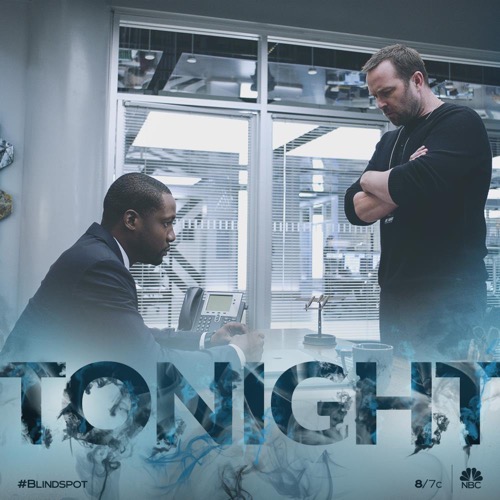 Tonight on NBC Blindspot airs with an all-new Friday, April 5, 2019, episode and we have your Blindspot recap below. On tonight’s Blindspot season 4 episode 17 called, “The Night of the Dying Breath,” as per the CBS synopsis “The team races against the clock to save Jane from a killer’s nightmarish scheme..”

The team arrested Madeline Burke and they all assumed that would be the end of HCI Global, but unfortunately, Burke still has one asset in the field. She had Dominic Masters. He was called a security consultant and in truth, he was more of a hired gun. Dominic did whatever Burke asked and he kidnapped Jane not long after Burke was arrested. She was later asked about the kidnapping and of course denied all knowledge of it. Burke claims that she’s just a businesswoman and that she didn’t even know why she had been arrested because there was no credible proof of any of her alleged crimes. Only someone later called the FBI about Jane. This person used a device to hide his voice and he claimed that he’d only free Jane if Burke was allowed to board a flight to Moscow. And he too used the same language about how they were just business people.

It was clear that this was all a prearranged plan. Burke knew that there was a chance she would be captured before she reached Russia and so she had Dominic put the plan into action when they were surrounded at the hospital. It was where they decided to separate and Dominic stayed hidden until he gets to a member of the team alone. He, unfortunately, found Jane and drugged her before he took her to a wooded area where he buried her alive. Jane was in a little box that was buried beneath the earth and she didn’t have long. She was allowed to talk to her team to assure them she was alive and based on her description of the box the rest team believed she had an hour at best. Jane would run out of oxygen in thirty minutes if the team didn’t trade her for Burke. And they couldn’t go ahead with the trade.

The Department of Defense did not believe in making deals with terrorists and that’s exactly what Madeline Burke is. She tried to crash Air Force One and almost turned the President’s plan into a nuclear bomb, Burke and more specifically her lawyer were denying the whole thing. They said that Burke was running from the cartel because it was the cartel that was trying to kill her and that she was innocent of everything else as well. Burke had tried to get some concessions out of the FBI like protective custody because she and her lawyer said that the cartel was still a threat and she also secretly agreed to be willing to help the FBI try to contact Dominic(who she claims was her former employee) if he could call her sons. Her children were her weak point and Zapata wanted to exploit it.

Zapata and Reade remained rational about Burke. They knew they couldn’t give her any concessions because she would try to manipulate things to her advantage and so they put them at odds with Weller. Weller didn’t care what the FBI policy or the DOD policy was because Jane was his wife and he wanted to save her. Jane was his chief concern and so Weller left the office because he needed to feel like he was doing something. He went to the forest where Jane’s cell pinged and he tried looking for her on his own. It wasn’t much, but luckily his team had his and Jane’s back. They did everything to lessen the miles that Weller had to dig through and eventually they even got Burke to assist. The plan to use her family against her worked because Burke wouldn’t want her sons finding out she murdered their father.

It seems Zapata remembered that little detail about Burke poisoning her husband to make it look like a heart attack. The man was dead and buried now, but if they exhumed his body and search for the poison they knew she used then it would reveal the truth. Burke didn’t want that getting out and she also didn’t want the FBI to dig up the old arrest record of her son because she knew her son could face forty years in prison for possession if the case was ever brought to trial. Its why she covered it up then and why she was still willing to cover it up now. Burke gave the team the location of Dominic’s cabin in the upstate New York and Weller went there except he didn’t anyone. Dominic cleared out of the place in a hurry and there was no sign of Jane or where she could be buried. She was running out of time and the team ran out of leads.

They had to save Jane and even though Jane asked them to not make a deal with Burke – the team felt like they had to. They went back to Burke and they agreed to put her on a plane. They just wanted to know how to get into contact with Dominic because they wanted assurances that they would get Jane back and so that’s when Burke’s lawyer revealed he knew Dominic’s lawyer. He might have even passed on the message to Dominic to get out of there when Burke had to give up his location and so the team didn’t want to free Burke. They told her that they might and then they kept looking for Jane themselves. They used the last life on her cell to ping her phone to a nearby location and Weller was able to get to his wife in time. She was revived and she was going to be okay.

But the plane they put Burke on was transportation to Rikers. The deal they made wasn’t on record thanks to her lawyer leaving on his cell blocking device and so now Burke was angrier than ever. She was dragged out of the FBI threatening Zapata and no one was going to forget that anytime soon.

Dominic, on the other hand, was still free and he had been handed something from Burke because Burke wanted him to carry out “Helios”.

No one knows what Helios is, but it’s dangerous.