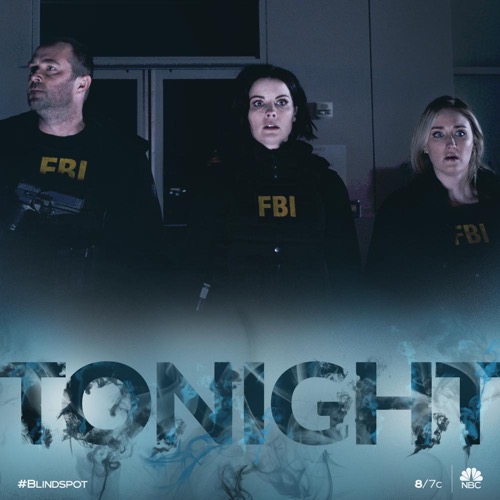 Tonight on NBC Blindspot airs with an all-new Friday, May 31, 2019, episode and we have your Blindspot recap below. On tonight’s Blindspot season 4 episode 21 called “Masters of War: 1:5 – 8,” as per the CBS synopsis “Dominic begins to enact Madeline’s cataclysmic scheme as the team rushes to stop him. Tensions rise as past secrets begin to unravel.”

Reade called Weller into his office. He apparently wanted to talk about why Weller visited Eleanor Hirst in prison, but Weller never got to answer the question because Weitz covered for him. He realized that Weller went there to get dirt on him and so he wanted to squash the story. Weitz said he gave Weller permission to use Hirst as a resource and that whatever it was wasn’t important enough. It was a crap excuse created on the fly. No one believed it and Reade still has questions about why Weller would go over his head when he could have come to him. The guys were still friends and so it made no sense for Weller to keep this visit a secret. Reade couldn’t say this because he couldn’t go against his boss and that’s why he dropped it. At least for now anyway.

It wasn’t often that Weitz was in the building and the big boss came to see them because he wanted good news. He first claimed that America needed it right now, but no one believed and so he admitted that he needed the win. Reade correctly guessed that a win would look good on Weitz’s resume. Weitz was going for the position as Director of National Intelligence and this would bring into the White House. Weitz was very ambitious and everyone knew it. They also knew that they weren’t getting any information the old way and so they decided to round up one of her cronies. They hit the home of some guy that used to work for her and it turns out they came moments after Keaton. The CIA was contacted by Barry Cornyn.

Barry used to be CIA. He was trained by Lucas Nash and Nash came with Keaton to figure out what Barry was up to, but he didn’t seem like he wanted to talk now that he had the opportunity. Barry left the CIA because he realized shop out his assets and he was doing a pretty good job as a mercenary. Then Madeline Burke hired him. Barry became involved in whatever “Helios” is about and so the FBI was hoping to finally get some answers. The FBI and the CIA wanted to interrogate Barry and neither side wanted to go second. So they eventually came to a compromise. Both sides would jointly interrogate the suspect and Weitz wanted to be in on it. He chose to become directly involve and he picked Weller as his partner.

Not only has Weitz suddenly decided to do field work, but he chose Weller to go with him and so this just made Reade even more suspicious. Reade later asked Jane if there was something going on and she lied to him. She said that she didn’t know what was going on and also added that she would keep an eye out. But Jane knew all about the stalemate between Weller and Weitz. She just didn’t say anything because no one else was supposed to know and so now she was lying to Reade as well. Reade felt sure that something was going on and now he felt like he couldn’t trust two of his best friends. Reade didn’t confront anyone because he wanted to remain focused on the situation and within moments that same situation went sideways.

The caravan transporting Barry was attacked. His body wasn’t found and everyone else was okay, but this disaster happened under Weitz’s watch and so Nash gave him some advice. He told him to throw his team to the wolves. Only Weitz couldn’t do that because his team knew too much about him. Weitz needed another solution and so he kept talking with Nash who suddenly had all the advice in the world. Nash told him to blame it on Keaton and he did. Weitz made a complaint and the next thing Keaton knew he was being sent to Malta. They framed it as if it was a promotion and Keaton knew better. He knew that they were trying to push him into early retirement and making it clear that it was either exile or a job that has nothing going for it.

But Keaton decided to hang in there. He was going to tell his family about the move and, before he left, he warned Reade and Zapata to be on the lookout. There were foxes in their henhouse and its best they trust no one but each other. This got to Reade because he knew that Weller and Hirst have become friends overnight and he thinks that maybe Weller is after his job. It was an idea worth seriously considering and the evidence was there. Weitz even later gave Weller his permission to grill Madeline Burke despite her having asked for her lawyer. Weitz was a former prosecutor and he said that there was some technicality that they could exploit. And so Weller went in there to grill her over project Helios, and meanwhile, Reade went and decided that its best he speak to Hirst for himself.

Also, Jane and Zapata searched through video footage of good old Barry and they found out that Barry was talking to a college student. The ladies brought this young woman for questioning and that’s when they learned that Barry pretended to be still involved with the CIA. He told this young woman that she could help them with simulation and so she handed created a computer virus. Barry never came to collect the virus but Domenic did and Domenic wasn’t just relying on a college student for help. He was using people inside the FBI and was in cahoots with Nash to ensuring that project Helios was carried out. And so all they needed was a signal to go ahead and that came directly from Burke.

Burke told Weller that she just remembered Domenic’s private cell phone number. She said that Domenic used it when they last talked and so Weller brought the number to the team. They couldn’t get the location so they hacked it and this alerted Domenic about being tracked. He disabled the phone and so the team went to last known location because they wanted to know why it was important, but while the team was there, Domenic set the virus in play. He had just been waiting for Burke and once he had it he set about gaining access to the national grid. He hacked and killed his way into the building. And he was trying to send the country back to the bad old days by cutting the power to everything.