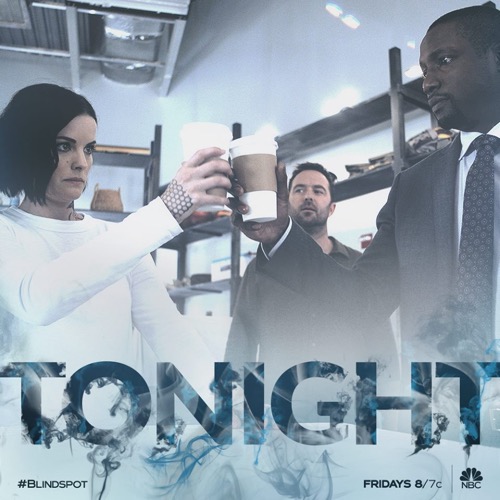 Tonight on NBC Blindspot airs with an all-new Friday, January 12, 2018, episode and we have your Blindspot recap below.  On tonight’s Blindspot season 4 episode 9 Winter Premiere called, “Check Your Ed,” as per the NBC synopsis, “The team’s desperate gambit to get Jane back puts her head-to- head with Remi.”

The secret was out. Remi returned to her super-secret-terrorist-self and she didn’t want to go back to be being Jane. Jane was someone that loved Weller and her friends, but Remi didn’t care about all of that and so she didn’t want to go with Weller back to the FBI. The FBI was willing to help restore the Jane memories and that’s what Weller wanted. He also wanted to save his wife’s life so he fought her until he was able to take her prisoner. She was then sedated and transferred back to the lab where she could be treated. And as no one knew how to treat someone with Remi’s condition, the professionals had to wing it.

They came up with this way of stimulating the Jane memories and they didn’t know it could help Jane or cause Remi to take firmer control. It was also a concern because Remi/Jane was suffering from the effects of Zip poisoning and so the mental stimulus might have been tough on the body. Remi’s vitals weren’t looking so good after a while because the part that was Remi was fighting the part that was Jane. The two personalities were battling for control of the one conscious and so both sides had their memories tampered. They both remembered waking up in the bag and getting taken to an interrogation room, but Jane was at ease in Weller’s presence and Remi was not.

It was when he walked into the room to question her that both personalities realized something was wrong. Jane went and kissed Weller. Their connection made her see that one half of the room was filled with light and the other half was shrouded in darkness. The darkness had terrorist plans all over the walls and that’s where Jane saw Remi. Remi was used to operating on her own and so she tried to stop Jane from getting outside help from her friends but Jane was in charge on her side and she brought in everybody. She had Weller, Zapata, Reade, Patterson, and even Rich helping her figure out what was happening.

Remi even began to notice how much Jane relies on others to be Jane and so she went to war with this other personality. The battle of Jane and Remi then took a negative side effect on her body. Her brain was becoming too active in an effort to fight itself and the body soon began having seizures. It was the seizures that worried Weller because he didn’t know what was happening and he didn’t know if he had made the right choice. He just thought that if there was a chance for him to get Jane back that he would do what he has to and so he never thought of the consequences even as Jane was living them out.

Jane began to remember her life as Remi. She remembered her childhood with Roman and it was how she was able to defeat the version that Remi set after her. It seems that more than Jane stops hiding from the person she used to be the more she’s able to control. Jane had believed in the beginning that she could only be a good person if she erased who she was, but she couldn’t defeat Roman until she embraced him and loved him as her brother. She came to realize that she shouldn’t have erased Roman’s memories and take that decision away from him because there was good inside the both of them all along.

Only when Jane was ready to remember, she ran into Shepherd and Shepherd told her that she wanted to remember then she should remember everything. This included the people she killed and the evil things she’s done. Jane saw all of it and what helped her to lose herself was remembering what Roman used to say. He would tell her that pain is a memory and that if she finds a safe place that nothing could hurt her. It was something they told each other when they younger as a way to remind each other that they control who hurts them and so Jane stopped giving Remi that power.

Jane removed Shepherd and she stopped trying to save a Weller she knew wasn’t real. The real one was waiting for her and she knew they’d be reunited the moment she defeated Remi. Remi thought that she had come first and that she should have control over their body, but then Jane introduced Remi to their real first self. They were once a little girl named Alice. The girl had been killed years ago by Shepherd and so it was time for both personalities to stop Shepherd from winning. To do that they had to forgive each other and eventually that’s what happened. They forgave each other and finally freed themselves Shepherd.

When the two personalities merged, they woke up and Jane was in charge.

Jane said that for the first time in her life she feels whole and she remembered that she broke Shepherd out of the black site. She wanted to take the team to Shepherd herself and they wouldn’t let her. Jane understood that they were still worried about the residual Remi parts and so they were going to need time to trust that Jane was Jane. But the team went after Shepherd and she wasn’t at the safe house anymore. She had left to go looking for Remi and so she went to Weller’s apartment. Weller was almost killed by Shepherd who demanded to know where Remi was and so it was a good thing when Jane showed up in time to shoot Shepherd.

Shepherd still thought she was Remi’s mother and Jane told her that a real mother would never have hurt her or Roman as Shepherd did.

And so it’s a good thing Shepherd died from her wounds, the team was finally ready for their world to return to normal…

… and as it turns out they forgot about the problem with Zapata until she was marched into their office handcuffed.