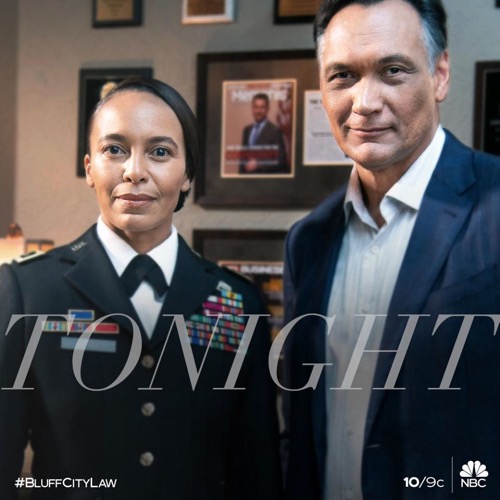 Tonight on NBC their new law drama Bluff City Law airs with an all-new Monday, November 11, 2019, episode and we have your Bluff City Lawl recap below.  On tonight’s Bluff City Law season 1 episode 8 called, “Need to Know,” as per the NBC synopsis, “Emerson’s mother, General Virginia Howe, arrives in town with a life or death case she wants Sydney and Elijah to take. Della helps her son deal with her father’s meddling behavior in the family business.”

This series looks very interesting so make sure to bookmark this spot and come back from 10 PM – 11 PM ET! for our Bluff City Law recap!  While you wait for our recap make sure to check out all our television recaps, news, spoilers & more!

Tonight on Bluff city, Emerson’s mother Virginia visits and everyone is on edge. She asks Elijah to help her save the lives of soldiers it seems as if Nomadis a manufacturer for the equipment used to make GPS units have a defect causing incidents to happen where coordinates and messages for distress are being misconstrued causing soldiers to die and get hurt and they are covering it up and before more GPS units are distributed to over 50,000 soldiers in the Army Virginia wants to stop the potential injuries and deaths associated with the glitch, Sydney doesn’t want to help since her father had an affair with Virginia, Sydney has resentment towards Virginia but eventually she decides to help with the case.

Della’s son Eric comes to her for help as her father is running the family liquor business and making bad decisions and wants to sell the business. She goes to talk to him but he refuses to hear her out. Della and Eric try to stop him.

Elijah and Sydney move on to interviewing soldiers making their case, but Nomadis digs up dirt on soldiers making them seem incompetent. Virginia and Elijah discuss their last and infidelity he admits it’s been bothering them what has transpired but Virginia states she did what was best and she then tells Elijah she wants to testify in the case but he is against it since the mission going to be discussed is classified, she asks Sydney what to do and she tells her to do it. The Department of Defense and General comes to tell Virginia not to testify.

Sydney begins to question her father about the affair he had with Virginia and the truth comes out that it wasn’t just a fling but he did love her and would’ve left Sydney’s mother for her.
Virginia prepares to testify in front of a judge when they arrive at the Department of Defense and General are there and the judge decides to dismiss it forbidding Virginia to continue to testify or file a lawsuit. Sydney feels as if they are hiding something and so does Elijah and they decide to Perdue the case despite the judge’s dismissal. As Sydney watches the interaction between her father and Virgina it upsets her and makes her feel uncomfortable.
Bri and Jake continue to prepare for their case and find the real killer thru online ancestry DNA testing and they find a match and potentially find who killed Tess

Della tries to convince her father to step down from the business and not sell it, but he’s upset that she decided to become a lawyer instead of taking over and running the family’s business, he doesn’t back down so she tells him she’ll hold a meeting to show he is incompetent and show all the illegal activities he’s done, he decides to step down and disown her.

Sydney and Emerson find something that can help the case as another General showed the same concern in the GPS unit and felt it was flawed. They also find General Ardmore has a 7% stake in Nomadis industry. They convince the judge to hold a hearing it comes out that during the two incidents where soldiers were killed and harmed General Ardmore sold his stock and then brought it back showing he believed there was a flaw in the GPS unit.

The Department of Defense settles the case and decides not to move forward with the Nomadis GPS unit until the flaw is found and fixed.

Virginia apologizes to Sydney about what happened between her and Elijah and the damage it caused. Virginia and Elijah also say their emotional goodbyes to each other.