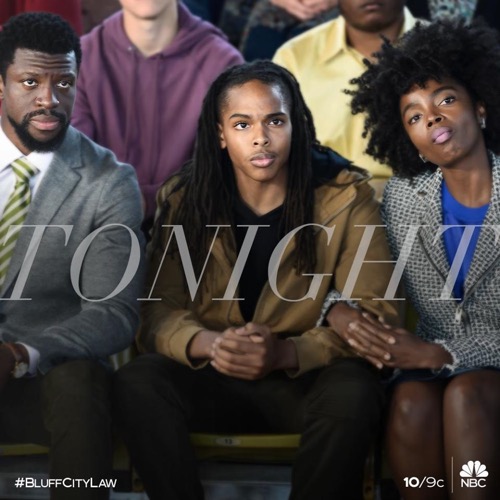 Tonight on NBC their new law drama Bluff City Law airs with an all-new Monday, November 18, 2019, episode and we have your Bluff City Lawl recap below.  On tonight’s Bluff City Law season 1 episode 9 called, “Ave Maria,” as per the NBC synopsis, “Elijah and Sydney help a catholic teacher fired from her school after undergoing IVF treatment, and Anthony gets involved with Briana’s nephew when he is prohibited from competing on the high school wrestling team.”

This series looks very interesting so make sure to bookmark this spot and come back from 10 PM – 11 PM ET! for our Bluff City Law recap!  While you wait for our recap make sure to check out all our television recaps, news, spoilers & more!

Elijah and Sydney team up on a new case. They meet with their client Ava who is a teacher at St. Vincent‘s Parish. She has been wrongfully terminated because she chose in vitro fertilization which is against the church’s policy. Because of this, they have fired her. Sydney is very upset while Elijah wants to go about this in the right way and respect the church.

Anthony attends a wrestling match with a friend. Her nephew Maceo is being told he cannot compete unless he cuts his long hair. Anthony steps forward to represent him.

Elijah and Sydney talk to their client Ava who tells them her situation but does not want to sue. Her and her husband only want to get her job back. Elijah and Sydney meet with Ava’s employers who tell them that there’s no way Ava can get her job back. She has committed a sin but the church will offer her two years severance pay. This is not good enough for them causing Sydney to get really upset. She’s ready to play dirty but Elijah explains that there is a better way. They need to show what a great teacher Ava is.

Maceo tells Anthony and his aunt he should just cut his hair but they tell him no way, they are ready to fight.

Ava is still hesitant about suing her parish until she is called to the school. The students have walked out in an effort to show their support. Ava is overwhelmed, telling them to get back to class. She is ready to move forward with the lawsuit.

Anthony finds Maceo skipping practice. He tells him he needs to stand up for his rights and for his team.

At the trial, Ava is painted as a sinner. First for her book suggestions to several students that is not on the approved book list. Her doctor also takes the stand and explains that 2 viable embryos were taken for Ava. The first one worked so the second one was discarded, painting her again as a sinner.

Sidney sits and talks with Bri about her current case. Her friend thinks she might have a problem with the church.

The church brings in an old friend of Ava’s. The woman tells the court that Ava was on drugs and acting erratic. Ava shares that she was depressed and on meds for help after a miscarriage. The lawyers again bash her character and how she has offered materials to kids outside of the parish approved lists. They point out how she signed her contract.

Outside of court, Elijah and Sydney go at it again. He tells her they need to be careful about how they fight. She needs to realize that Ava has supporters and a great personality. It will help them win.

George, a wrongfully convicted man who is now out meeting with his accuser. She begs for his forgiveness. George gives it to her, hugging her. Jake watches from a distance, he is in awe of George’s spirit.

Elijah sits with Ava’s husband. He didn’t know about everything Ava went through and how she lied about it. Elijah explains that she was just trying to protect him.

Sydney sits with Ava. They talk about faith and the church. Meanwhile, Anthony addresses the athletic board about the rules of the game and how athletes can keep their identity. The whole gym claps after his speech.

Sydney comes to Elijah to tell him he was right about staying positive and keeping it above board was the right call. She asks to close tomorrow.

The next day in court, the church lawyer speaks first, detailing that the firing about Ava is all about her contract. She broke it and now they need to let her go. Sydney takes her turn for closing argument, detailing Ava’s unshakable faith and God’s plan.

While waiting for the verdict, Sydney runs into Robbie who shares he broke up with Lauren. Lauren is sure he is still in love with her. Meanwhile, Maceo refuses to cut his hair before the meet. Anthony runs in to tell him he can wrestle, it was decided.

Ava wins her case, going into labor right after. They see her off to the hospital before Elijah and Sydney head to church together.