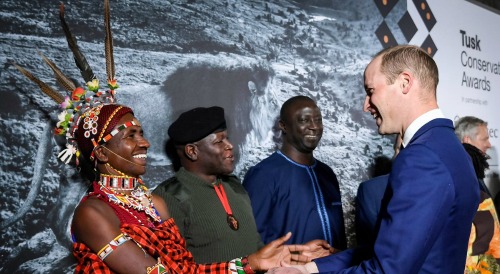 British royals news reveals that Kate Middleton was all set to attend a swanky event, but she had to bail at the last minute. It turns out the Duchess of Cambridge had an excellent reason to skip the Tusk Conservation Awards gala: she was needed on Mommy duty! According to People, sources close to the Palace insisted Kate’s decision was “due to the children.” They wouldn’t elaborate, but it’s clear that Kate’s kids needed her. She did what any good mom would do and put them first.

The Duke of Cambridge naturally stuck around to make sure the royal presence was felt at the gathering. Prince William’s role at the event was crucial since he had three awards to present.

After Prince William honored those who protect Africa’s wildlife, he made a special speech about this cause. It’s definitely one that’s near and dear to his heart. Prince William has been the Royal Patron of the Tusk Trust, which is over this awards gala, for almost 14 years.

In his speech, Prince William talked about spending time with the nominees and finalists. He was incredibly moved by their devotion and spoke quite eloquently about it.

“Their bravery, single-minded determination and commitment to African conservation is deeply, deeply humbling,” Prince William said. It’s a shame that Kate had to miss her hubby’s big moment, but we can all understand that a mom’s work is never done.

Even the royals get busy with the kids from time to time and have to make them a priority. There’ll be many other galas to attend in the future – and we’ll give you updates on any important ones!

British royals news reveals Kate wasn’t forced to skip all the day’s events since she still appeared at a tea party beforehand. At Kensington Palace, Kate and Prince William celebrated with the winners before the gala kicked off. It sounds like Kate’s found a nice balance of fulfilling royal obligations and being there for her little ones when the need arises. Be sure to check CDL often for the latest British royals news and updates.

We have to move faster and more effectively to find ways to balance our demands on this planet 🌍 with the nature 🐘 we share it with. #TuskAwards #ForAllTheyDo pic.twitter.com/cAEYY4hLJ4