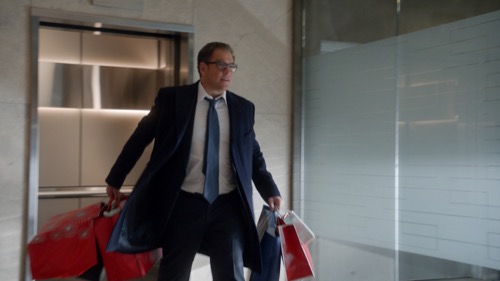 Tonight on CBS their drama Bull inspired by Dr. Phil McGraw airs with an all-new December 16, 2019, episode and we have your Bull recap below.  On tonight’s Bull season 4 episode 10 Fall Finale called, “Imminent Danger,” as per the CBS synopsis, “Bull and the TAC team take a difficult pro bono murder case before the holidays and realize it will take a Christmas miracle to win, as the presiding judge has a grudge against Bull. Also, Marissa pushes for an office Christmas party, and Taylor embarks on a new romance.”

A young woman sits down at a computer at work and is bombarded with a small video of her and her ex Garrett. Later she goes to the bar with her friends and Garrett is there. She goes to tell him to stop stocking her but he turns it around and tells her that she must be stocking him. In the middle of the night she wakes to her thermostat set so high she needs to open a window and take a shower. When she comes out of the bathroom there’s lingerie and a rose on her bed. She calls the police but they don’t find anybody or any of his prints. They leave.

She chases Garrett out of the house down the front steps after shooting him once. She continues to shoot him on the sidewalk until he is dead.

Bull has just returned from Christmas shopping. Marissa tells him what she wants for Christmas and it is a scented candle and a Christmas party. He agrees after some teasing.

Benny shows up to pick up Bull and they head out to their pro bono case which involves a female who shot her stalker six times.

At the jail, the young woman details the night of the shooting. She explains that even after she pulled out a gun when he appeared in her kitchen he kept coming at her. He is a tech wiz who has been harassing her. He also took her dog.

Taylor goes on a blind date. It goes very well. The next day she waits to get a callback.

Bull and Benny find out that Judge Humphreys will be presiding over their case. The man hates Bull and he will have to sit in the gallery during the entire proceedings. Throughout the jury selection, Bull has a hard time trying to talk to Benny because the judge interrupts them constantly, irritated with Bull.

As the day goes on the judge big continues to pick on the bowl. At one point he yells at Bull to get out of his courtroom. Bull responds and he is fined.

Back at the office, Taylor tells them that Garrett’s computer is completely clean which is very strange. The next day at court, Marissa fills in for Bull.

During one of the police officers testimonies he says that the young woman, Erin, called Garrett several times. Erin tells Benny she never did. Benny cross examines the officer about spoofing technology. Benny also points out that Erin went to extreme measures in regards to security and nailing shut her doggie door to keep Garrett out of her home. She was in fear of her life.

Taylor asks Chunk to call and text her because she thinks her phone doesn’t work. The guy the other night has yet to call her back and it’s been two days.

The other side introduces one of Garrett’s neighbors who was also dating him at the time of his death. The lawyer paints a picture that Erin is actually the stalker who went over to his house, screaming and hitting windows.

Marissa, Bull and Benny have a meeting. Bull wants Benny to play to juror number three but Marissa thinks it’s juror number nine who has a weak spot for Erin. Bull goes against her.

At court the next day Marissa secretly tells Erin to focus on juror number nine during her testimony. Meanwhile, Taylor and Danny break into Garretts apartment to find out if he has any additional computers with proof showing that he was stocking her. They find an underground cellar with computers everywhere.

The next day they prove in court with several recordings that Garrett was actually stalking Erin.  All of the jurors turn green.

The team is celebrating at their beautiful Christmas party. Marissa is thrilled and very happy. Taylor is also happy after she gets a call from her date, George.