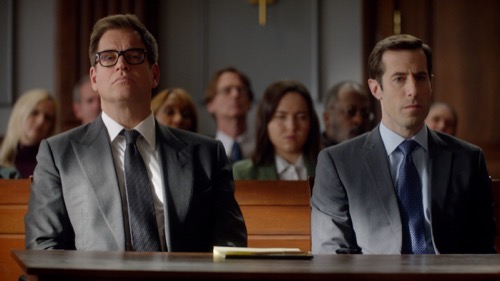 Tonight on CBS their drama Bull inspired by Dr. Phil McGraw airs with an all-new Monday, February 04, 2019, episode and we have your Bull recap below.  On tonight’s Bull season 3 episode 13 called, “Priors Bad Acts,”  as per the CBS synopsis, “Bull’s new relationship with Diana, his on-again romantic rival, is complicated by his renewed feelings for his ex-wife, Isabella, when they’re reunited by the sudden death of her and Benny’s father.

Also, a deceased tech billionaire’s brother comes to TAC for help in bringing suit against the doctor he holds personally responsible for the tycoon’s death.”

An unmarried couple has an intimate night until the man has issues with his health. She gets his nitroglycerin. He is better. He tells her he needs to get some work done. She agrees and leaves. She shuts the door. He collapses.

Bull arrives at work and is upset that Mr. Weeks, a very rich client is sitting alone while Benny sits in his office. Marissa tells him he needs to talk to Benny. Bull goes in and Benny tells him his father has died. Bull tells him to go home.

Chunk and Bull meet with Mr. Weeks whose business partner and brother died from a nitroglycerin overdose. His brother followed his prescription to the tee. He wants to sue the doctor who must have prescribed him a lethal dose. Bull and the others think this will be hard to prove but accept the case when he gives them a $1 million retainer.

n the car, Benny tells Bull it feels weird he has no father or mother as they head to the funeral. Meanwhile, the team finds out Mr. Weeks’ brother had a nitroglycerin ointment all over his hands. He was a fatal dose mixed with his meds.

Bull sees Benny’s sister, his ex-wife, at the cemetery. Prior to their meeting, Benny confides that Izzy is having trouble with her husband. When Bull sees Izzy she breaks down and hugs him. Back at the house after the funeral, Bull calls Marissa and tells her about Izzy and how he has always wanted to save her. He realizes Izzy is in the room. She kisses him.

Marissa and Chunk meet with Mr. Weeks. They tell him his brother’s doctor didn’t kill him. They ask for a list of people close to him. Later, Mr. Weeks tells Chunk on their walk out of the building that his brother was a germaphobe and used a lot of hand sanitizer.

Marissa and the team bring Bull up to speed. They have tracked down a girlfriend of the victim who he was dating for the last 6-7 months. She has an interesting past – a slew of dead husbands who she collected large life insurance policies on. She has also changed her name several times. When she arrives at the office, they serve her with papers.

Bull talks to Marissa. Izzy isn’t calling him back. He is concerned. It also prompts him to cancel Diana’s flight to come and see him. He is torn.

In court, Benny shares that the victim had hand sanitizer in his gym locker with high doses of nitroglycerin. But they cannot prove the victim’s girlfriend was the one who did it.

Izzy calls Bull and asks him to meet her tomorrow night. Later at the office, the team sits around eating dinner and trying to figure out a motive for the girlfriend who didn’t stand to receive any money. They get to thinking, maybe it has something to do with the stocks of the company. Bull asks Taylor to call her ex and ask a few questions about who would make money if their victim’s company stock plummeted.

The next morning, Bull tells Benny he worked all night and he has something. At court, Benny questions the girlfriend on the stand. He makes a strong case that she bought 40,000 stocks against the company before supplying the victim with hand sanitizer after taking his pill. Bull is thrilled. The girlfriend pleads the fifth.

Bull meets with Izzy. She apologizes for kissing him and she needs him to stop calling her. He understands. He gets up to leave and they end up kissing again. They laugh after and Bull makes his exit.