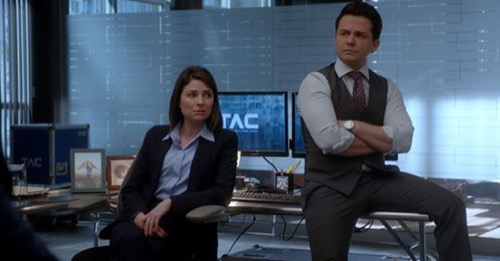 Tonight on CBS their drama Bull inspired by Dr. Phil McGraw airs with an all-new Monday, February 18, 2019, episode and we have your Bull recap below.  On tonight’s Bull season 3 episode 15 called, “Security Fraud,”  as per the CBS synopsis, “Bull gets to work alongside his idol, Walter Franklin, a legendary lawyer who asks him to help a family bring suit against the U.S. government for the wrongful death of a man killed while in witness protection.

As the trial gets underway, Bull’s admiration for Walter is tested when the eminent litigator begins to deviate from Bull’s advice in court.”

One of the great legal minds of the twentieth century became a client. His name was Walter Franklin and he was a personal hero to both Bull and Benny. Therefore, a man like Walter Franklin could have asked for anything and instead he asked for the impossible. The attorney used to represent Anthony Gibson. Gibson was a midlevel account who agreed to turn against his bosses and help the government take down the Midwest Madoff. Gibson had been promised safety for his family in exchange for this testimony and unfortunately, he had been murdered in Witness Protection. Gibson’s widow contacted Franklin because she wanted to sue the United States Government for the wrongful death of her husband.

This case was impossible for several reasons. One of them being that no jury could sympathize with a man like Gibson because he used to work with big money fraudsters. It wasn’t Gibson’s fault, but he would become guilty by association and no one would take his wife seriously. Franklin knew this and he still went to Bull for help. Bull was the only one that could possibly see a way through bringing this lawsuit to court and so there were a few things that Bull wanted first. He wanted to meet the widow and he later regretted this decision because he could see that Sherri wasn’t acknowledging how hard this was going to be. She believed her anger was her right and that the government failed to keep her husband safe.

Sherri considered her family as victims. Which isn’t a strategy that would work in court or with a jury and so the widow couldn’t be the face of this lawsuit. Bull believed the only fighting chance they had was if they used the daughter. Tiffany Gibson was fifteen and has had to restart her life several times over with the latest redo being hours after she learned of her father’s death. The teenager was so traumatized that she didn’t even come to the door of the motel. She had asked Bull to come through the window and all the while she held a mattress in front of her as a safeguard. Tiffany was the perfect person to get sympathy from the jury and so all Bull had to do was convince Sherri it was the best decision.

Sherri wanted to be there in court because she was acting more from anger than reason. She thought she deserved to be there with her daughter and so Franklin told her the truth. He told her that she would hurt her case more than help if she showed up in court. Sheri chose to take the advice of her family friend and she entrusted her daughter to Franklin. Franklin later sat down with Tiffany and Bull to discuss what they wanted from a juror. They needed someone that mistrusted the government and oddly enough Franklin went out of his way to pick the opposite of that. He chose people that firmly sided with the government and wouldn’t think his case was credible. And at no time did he look over at Bull for Bull’s opinion on the potential juror.

Bull didn’t know what was going on. He later pulled Franklin aside to ask about the jury selection and at first Franklin didn’t remember. He had no recollection of being advised to check with Bull before he made any decision, but he went on to say that he’s been choosing juries for over half a century and didn’t need any help. It could have been pride that made him say this and so Bull was initially going to ignore what happened. Then Franklin made the mistake of asking Bull to the same pizzeria that they went to earlier that day. It was as if Franklin couldn’t remember the earlier trip or the conversation they had there. This was when Bull began to worry. He thought that Franklin was suffering problems with his memory and he feared it could hinder the case.

Bull informed Benny what happened. He also asked Benny to be the second chair in case Franklin began to show other worrisome signs. Franklin proved himself in court and had turned the jury with his questioning of Tiffany, but there was also a cross-examination. The State Attorney asked Tiffany again if her father had done everything right and once Tiffany assured her that her father never took any risks it came time to for the State’s Attorney to drop her evidence. She had evidence that Gibson visited Chicago. He went back to his former life and it was most likely why he did. The State’s Attorney seemed sure that if Gibson hadn’t gone back that he would still be alive and so that’s when Tiffany mentioned the real reason her father drove to Chicago.

Tiffany said she went back first. She missed her boyfriend and took a train back to Chicago. Her father simply followed her because he didn’t want her to be in any danger and he didn’t say anything to the Marshalls because he didn’t want them to take Tiffany to task. She had realized her mistake and she hadn’t fought when her father got her back. Tiffany said on the stand that her father was just protecting her and that he really did follow the rest of their orders. Sadly, Tiffany’s assurances didn’t mean as much when everyone found out she ran away and that she probably put her father in danger. She cried herself to sleep after the trial for adjourned for the day and Franklin blames himself because he said he should have protected her more on the stand.

Franklin also asked Bull again if he wanted to go to the pizzeria and that had been the final straw for Bull. Bull respected the man and didn’t want to walk over him, only he told Franklin that he was going to hurt Tiffany’s case if he continues as lead chair and so Franklin handed it over. He realized that he wasn’t at his best and he thought Benny would better as the lead chair. Benny tried to do his best and he wasn’t as great as Franklin. But they did learn some interesting information. They learned the gun that killed Gibson was used in another homicide in Chicago and that it had been collected by Special Timothy Stokes. Stokes handled the case in Chicago and he had been the FBI agent handling Gibson’s case.

Gibson, it seems had been asked to testify again against a man named Ted Morris who was a union boss that invested the whole pension in a fraudulent Ponzi scheme because he was getting kickbacks. As the lead accountant, Gibson had all the information to testify against this guy and he wasn’t sure if he wanted to risk coming out of hiding to do it. He was pressured by Stokes and still wouldn’t do it. Then Gibson died. He was killed because someone fired a gun into his toll both and it ricocheted. The bullet wasn’t meant to kill him, just frighten him. Stokes had been so busy trying to make a mistake that he accidentally killed his chief witness and it had nothing to do with Gibson making a trip back to Chicago.

Bull let Franklin question Stokes on the stand and that coupled with the evidence they found – meant that the government really were at fault for Gibson’s death and so his family won the lawsuit.

Franklin said he was going to retire now that he had one last glorious day in court and after he made his announcement he told everybody about the great pizzeria he knows just around the corner.