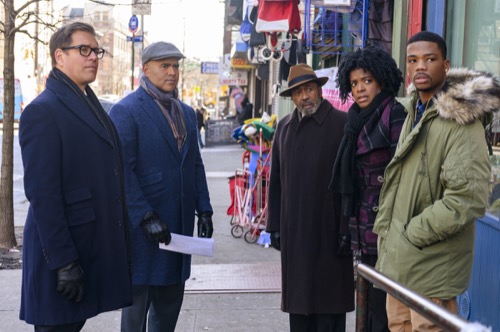 Tonight on CBS their drama Bull inspired by Dr. Phil McGraw airs with an all-new Monday, February 25, 2019, episode and we have your Bull recap below.  On tonight’s Bull season 3 episode 16 called, “Security Fraud,”  as per the CBS synopsis, “The TAC team works tandem cases when Chunk represents his first legal client, Darius Lambert (Brian Bradley), a young man facing federal counterfeiting charges, and Bull represents Darius’ grandfather, Willie Lambert (Ben Vereen), who may lose his business to the FBI for owning the barbershop where the fake goods were sold.”

On tonight’s episode of Bull, Chunk is given his first case as a student. He is given a case that involves a young man who is a barber. He works at his grandfather’s shop. They couldn’t make ends meet so he decided to sell counterfeit goods. He tells Chunk his customers knew it was all knock-off items. He didn’t lie to anyone. Chunk gets him out on bail on personal recognizance after he is charged with illegally selling trademarked goods.

Bull tries to call Diana again but she won’t take his calls. Chunk knocks on his office to talk to him about his client Darius’ case. Darius calls just then to tell him the FBI has taken over his grandfather’s shop. Bull and Chunk head out to Brooklyn to see what is going on.

Angered, Bull tells Darius’ grandfather, William, he can represent him while Chunk represents Darius after learning the FBI seized the property. Bull tells the FBI to vacate the premises. They don’t care, telling him they will see him in court.

Chunk asks Danny two go and look at the merchandise down at the FBI that Darius was selling. She takes a look at the items and finds two evidence stickers in some of the handbags with two different dates.

At court, Benny tries to get William’s shop back. The judge doesn’t care, he will only fast track the case because of his loss of income.

Back at the office, the team talks about both cases when Danny comes in. She has discovered the seller of the goods was never arraigned because he is an FBI agent. Chunk thinks he can get Darius off if he proves entrapment. They explain to him why he cannot. They will have to find another angle.

In court the next day, Chunk points out how all the vendors throughout the streets of the city sell knock-off merchandise and to boot, the goods were supplied by the FBI. Later, Benny is angry Chunk went with this angle. He told him not to.

Bull intervenes in their fight. The FBI agent who trapped Darius will take the stand in both of their trials and they need to deal with it and win.

Chunk levels the FBI agent on the stand the next day. In another courtroom, Benny points out the agent made it a point to dodge William who knew nothing about what Darius was doing. Later, Bull speaks with the opposing counsel in Chunk’s case. They decide on a deal. Darius doesn’t have to admit he is guilty but he will get 1 year instead of 10.

Bull tells Chunk about the deal. He isn’t happy but Bull reminds him of the angle he chose proved Darius did it. Chunk goes to see Darius who isn’t sharing what he wants to do.

In court, Darius decides he will take the deal until Chunk talks him into fighting. After Chunk tells the judge, Benny and Bull abruptly leave the courtroom.

At the office, Chunk apologizes to Bull but he can’t stop now. He is putting William on the stand the next day. Bull isn’t happy.

William takes the stand the next day. He paints a picture of his grandson doing so well and how all he wanted to do was help his grandfather. Chunk thinks it went well but it isn’t going to be enough. Benny and Bull think otherwise.

In William’s case, Benny brings Darius’ probation officer in who takes the stand to admit that he was shown the back of the barbershop. Benny points out that this is proof William had no idea.

In court the next day, Chunk gives his closing argument. Marissa and Danny watch as all of the jurors turn green. After their wins, Bull thanks Chunk for his hard work and his defiant pushback.